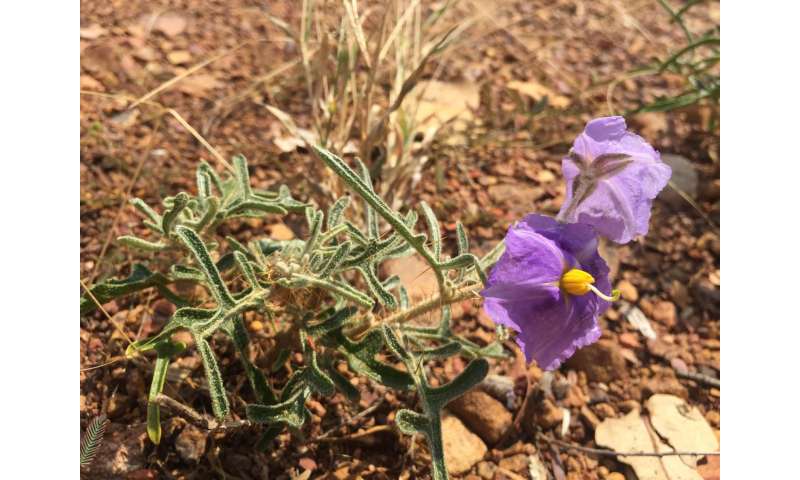 Summary: A new species of bush tomato discovered in a recently established national park in Australia provides a compelling argument for the importance of federal investment in science and conservation.

A team of botanists from the US has named a new bush tomato species, based on collections made by their Australian colleagues, during government-funded surveys in a brand new national park.

After looking at collections from biodiversity surveys of a 10,000 km2 area now known as Limmen National Park, Bucknell University biology professor, Chris Martine, decided to form an expedition to relocate and describe a mysterious bush tomato uncovered during the government-sponsored studies.

A year later, Martine and his co-authors, including an undergraduate student, have published the new species in the open access journal PhytoKeys. The discovery offers a powerful case for investing in conservation through park systems at a time when these systems are under threat.

For the team of US scientists, knowing where to go was one challenge, but understanding the landscape in such a remote corner of the Australian Northern Territory and figuring out how to get there was quite another. Martine and his team from Bucknell (undergraduate lead author Mae Lacey and postdoctoral fellow Jason T. Cantley) could not do it without the local assistance and expertise of Peter Jobson, Senior Botanist at the Northern Territory Herbarium in Alice Springs.

To acknowledge the pivotal role of Jobson in the successful search, the new species, Solanum jobsonii, has been named after him.

“Jobson is one of a handful of botanists employed by the Northern Territory government who are tasked with stewarding a vastly diverse flora,” explains Martine. “Not only are many species there of conservation concern, but unknown numbers of species are yet to be found and given names. Those scientists are doing yeoman’s work.”

Martine named a previously discovered species for Ian Cowie, the Curator at the Northern Territory Herbarium in Palmerston, in 2011. Solanum cowiei, a species from Litchfield National Park, was described in a paper appearing also in PhytoKeys.

The scientists hope that the discovery of this latest new species turns a spotlight on the importance of protecting natural areas and supporting the individuals who are charged with their care.

“Notably, the use of trained biodiversity scientists in surveys of the proposed parkland provided masses of data in support of protecting this area as a national treasure,” write the authors in the article. “The discovery of the new species described here, and the potential description of other new forms of biodiversity from Limmen National Park, is a testament to the benefits of not only investing in national parks in Australia and elsewhere, but also investing in parks-based scientific inquiry.”

The new species, a relative of the cultivated eggplant, has been recorded under specific habitat conditions from only four locations in the monsoon tropics of northern Australia. Because of this, Martine and his colleagues have suggested that it be listed as “Vulnerable” as per the Red List Categories and Criteria of the International Union for Conservation of Nature.

“There are rare and unusual species all over the world, just like this one, that deserve our appreciation and protection”” said Martine. “Luckily, many are already living within the boundaries of conservation areas like state and national parks in Australia, the US, and elsewhere.”

“However, the rise of anti-science and anti-conservation rhetoric in the US, especially, has put federal and state protected lands here at risk,” he said. “It also threatens the rich biodiversity our Founding Fathers celebrated and the American scientific enterprise they held so dear.”