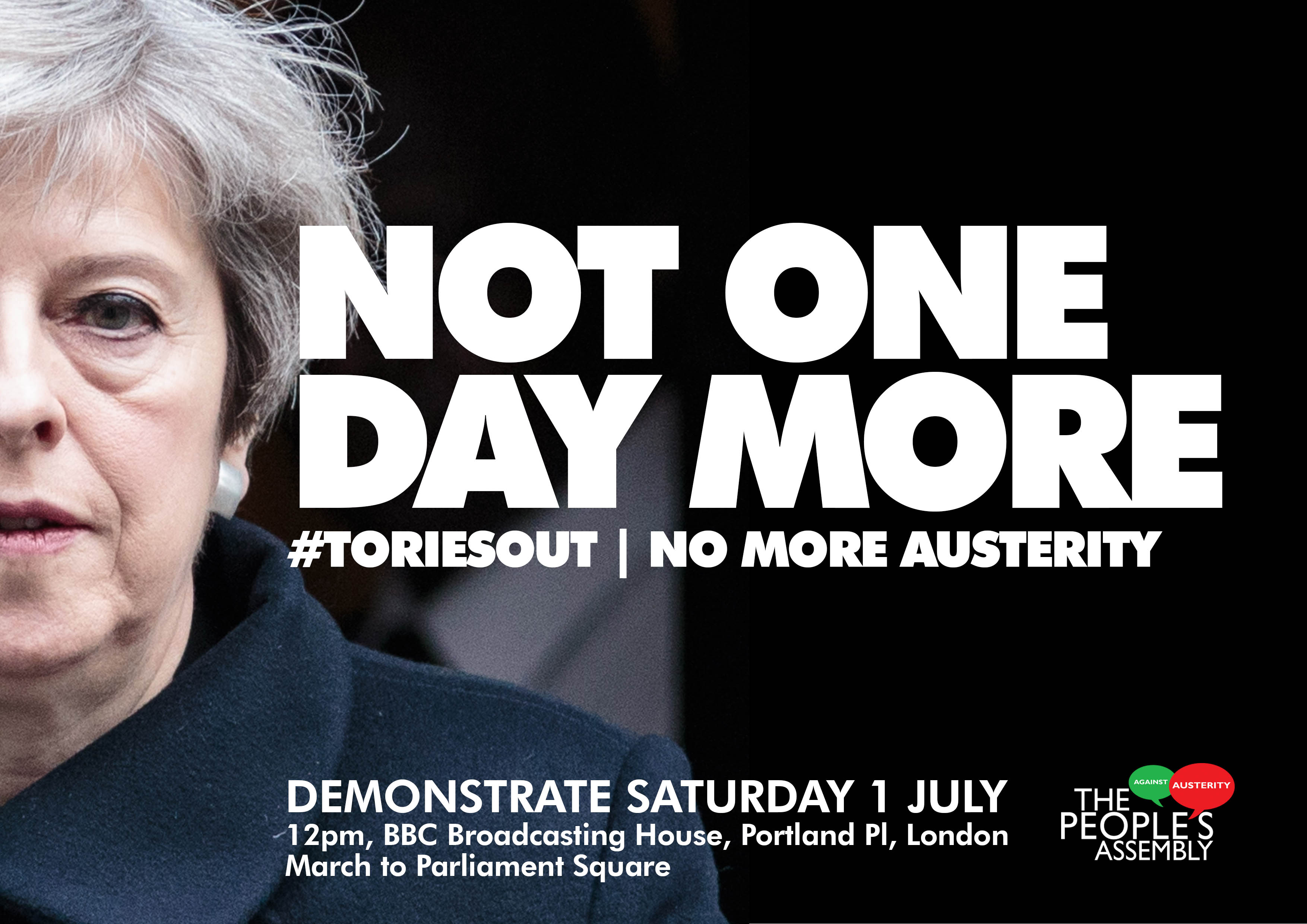 By Steve Sweeney and Conrad Landin in Britain:

July 1: Take to the streets to give May the boot

People’s Assembly sets the date for march on Parliament as McDonnell calls on Brits to force another general election.

A MAJOR national demonstration will take place in London on July 1 to get rid of “Theresa and the terrorists,” the Star can exclusively reveal.

The People’s Assembly called the demo, saying: “Street mobilisations are more important than ever” and can “create a crisis the Tories can’t recover from.”

It comes a day after shadow chancellor John McDonnell called on Brits to “get out on the streets” to force another general election “as early as possible.”

In his first major speech since Labour’s election surge last Thursday, Mr McDonnell also revealed Labour will seek to exploit the DUP’s manifesto call for the removal of the bedroom tax to axe the hated policy.

He confirmed that Labour would “keep its winning team together” and not replace shadow cabinet loyalists with former critics of Labour leader Jeremy Corbyn from the party’s right.

“When there are vacancies, yes, we will ask people to serve… in a spirit of comradeship,” he told delegates at food union BFAWU’s conference in Southport yesterday.

“Jeremy’s character is one of consensus-building. He said: our campaign is positive, it cannot be negative.”

But he rebuked MPs for not being “generous” to Mr Corbyn, saying: “I’ve never seen such behaviour in the [Parliamentary Labour Party], you wouldn’t tolerate it in your [union] branches, I can tell you.”

“We need people doing everything they can to ensure the election comes as early as possible,” he said. “I don’t think an alliance of Tories and the DUP can ever be strong and stable.”

Protests took place across the country last weekend in response to Prime Minister Theresa May’s attempts to forge an alliance with the Democratic Unionist Party (DUP) and form a minority government.

Now, the People’s Assembly has called a mass demonstration, with national secretary Sam Fairbairn vowing to “do all we can to get rid of Theresa and the terrorists.”

He told the Star: “The election result was absolutely devastating for Theresa May. Her arrogance led us into this as she thought she’d gain a huge majority.

“This shows how out of touch she, her party and mainstream political commentators are. They had no idea of the levels of anger and distrust in a government who plan further austerity measures, that has done nothing to solve the NHS crisis and that wants to bring back grammar schools and selective education, taking us back to Victorian times as living standards continue to fall.”

He pointed out that the Tories had gone all-out to smear Mr Corbyn as a terrorist sympathiser, “yet at the first sign of losing power they are jumping into bed with the DUP.”

Mr Fairbairn added: “Now the street mobilisations have never been more important and we say to the millions of people who engaged in politics for the first time that they can be part of a mass movement for change, deepening the crisis for Theresa May.

“Her days are numbered.”

Mr McDonnell also backed BFAWU’s call, overwhelmingly endorsed in a conference resolution yesterday, for the TUC to call a “national demonstration” in support of Labour’s policies.

“What we need now is the TUC mobilised, every union mobilised … get out on the streets,” he said.

“Just think, if the TUC put out that call that we want a million on the streets of London in two weeks’ time.”

He said voters had been turned off by the Tories’ repetitive slogans.

But he stressed that voters turned to Labour because of the appeal of Mr Corbyn and the manifesto as well as turning away from May.

“[The manifesto] struck a chord because of what people are experiencing at the moment,” he said. “It’s all right for the few but for the many it’s wage cuts and wage freezes.”

And Mr McDonnell savaged the Tories for attacking his and Mr Corbyn’s position of negotiating with republican leaders in Northern Ireland before entering their own DUP alliance.

“Don’t ever again come at us on that basis,” he warned.

Delegates at BFAWU’s conference said a national demo in support of Labour policies could mobilise young people newly inspired by politics to get involved in trade unions.

“We want [a] £10 an hour [minimum wage] not because it’s pie in the sky, but because we deserve it,” executive member Lorna McKinnon said.

“Young people are most likely to support strike action and the least likely to join a union. We have to fight to change that.”

The People’s Assembly demonstration will meet at the BBC headquarters in Portland Place from 12pm before marching to Parliament.

46 thoughts on “‘Theresa May and her terrorists out’, London march 1 July”