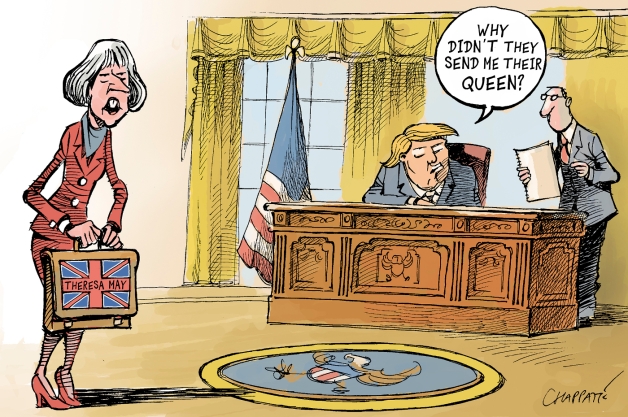 The White House and Downing Street have denied US President Donald Trump wants to delay his state visit to the UK.

It comes after the Guardian reported Mr Trump called Prime Minister Theresa May to say he did not want to visit until he had support from the British public.

US administration officials have, however, told the BBC the president “does not feel like” visiting the UK any time soon….

Following the Guardian article, Labour leader Jeremy Corbyn posted a message on Twitter, welcoming the “cancellation” of the visit.

He added: “He knows that the British people find his politics appalling and that they won’t be scared to make their views known.

“Theresa May should be embarrassed that she was so quick to offer Trump a state visit. Now neither of them want to be seen with the other.”

Mr Trump’s own Twitter account, through which he regularly makes announcements, has not made any recent mention of the UK state visit.

DONALD TRUMP has put his visit to Britain on hold over fears that it could be met by huge protests.

Campaigners against the Republican US president’s plan for a state visit said yesterday that the decision was “another major blow” to Prime Minister Theresa May, following her general election humiliation last week.

Downing Street refused to comment, saying only that the invitation — issued by Ms May on behalf of the Queen when she met Mr Trump in Washington just seven days after his inauguration — remained unchanged.

Nick Dearden, who is director of Global Justice Now which is part of the Stop Trump Coalition, called it an “incredible victory” that ordinary people have forced Mr Trump to “run scared”.

He said: “By Trump’s own admission, people power has forced him to postpone this state visit, which Theresa May should never have offered in the first place.

“We put tens of thousands of people on the streets earlier this year, and warned they would be multiplied many times over if Trump actually came to Britain. He’s running scared.

Noting that the US president has reportedly said that he would not visit Britain until the public supported him coming, Mr Dearden predicted: “He’ll be waiting a long time.” …

Mr Trump’s change of plan is a blow to Ms May, her support of human rights-abusing regimes — including Saudi Arabia — and her policy of blaming migrants for problems created by years of neoliberal government, Mr Dearden added.

Campaign group Stand Up to Trump — in alliance with Stand Up to Racism, the Stop the War Coalition, People’s Assembly, and Campaign for Nuclear Disarmament (CND) — said it was the work of activists that had forced Mr Trump to change his mind.

A spokesperson added: “Donald Trump was afraid of the protest movement that would have engulfed him.”

9 thoughts on “Trump to Britain, yes or no?”