By Steve Light in the USA:

Hundreds of students from several New York City high schools walked out of their schools Tuesday to protest against President Donald Trump. Though the marches were called against Trump’s anti-immigrant measures, they were partly spurred by the Senate’s confirmation of billionaire Betsy DeVos as secretary of education. Five hundred students had gathered in the rain by 1:00 pm and more trickled into the park throughout the afternoon.

Foley Square in lower Manhattan is surrounded by court houses and government buildings and often a site of protests. The growing participation of high school students in the anti-Trump protests is a sign of the depth of the popular social anger over his right-wing policies. The presence of hundreds of high school students in the streets is a sign that a younger generation, which has grown up entirely in the shadow of the Bush, Obama and now Trump administrations, is becoming politically radicalized.

The demonstration had been announced only a week before by students on Facebook. It was originally organized by Hebh Jamal, a 17-year-old high school student from the Bronx, and fellow students, according to Seventeen magazine, whose call for a demonstration received an outpouring of support from students at other schools throughout the city. Many of the students made their own signs, with generally democratic sentiments such as “Silence=Violence,” “America is for everyone,” “Not My President,” or “Grizzlies for DeVos” (in reference to the absurd remark by DeVos that guns should be allowed in schools to protect students from grizzly bears).

Students chanted “You build the wall, we tear it down” and pro-immigrant slogans, sometimes while jumping in unison.

Natahlie, who came with a group of students from Brooklyn Prospect Charter school, said, “We are learning about protests in history. Now a lot of changes need to be made. Specifically for this protest we are here looking to get the end of the ban on immigrants. Hillary won the popular vote. Some here, including me, wanted Hillary to become president. Some wanted Bernie. But practically, from the protest, we want New York State to be open to diversity.”

After the WSWS reporter explained the SEP position on how the Democrats and Republicans both acted in the interests of the ruling elite and the need for socialism internationally, Natahlie responded, “I would support socialism. Capitalism divides with racism.”

Four students from Beacon High School had arrived with a smaller group early and cheered when another group of about 50 more students from their high school marched into the rally. One of them, Eibhilin said, “We are against Donald Trump and his recent attacks on immigrants.” 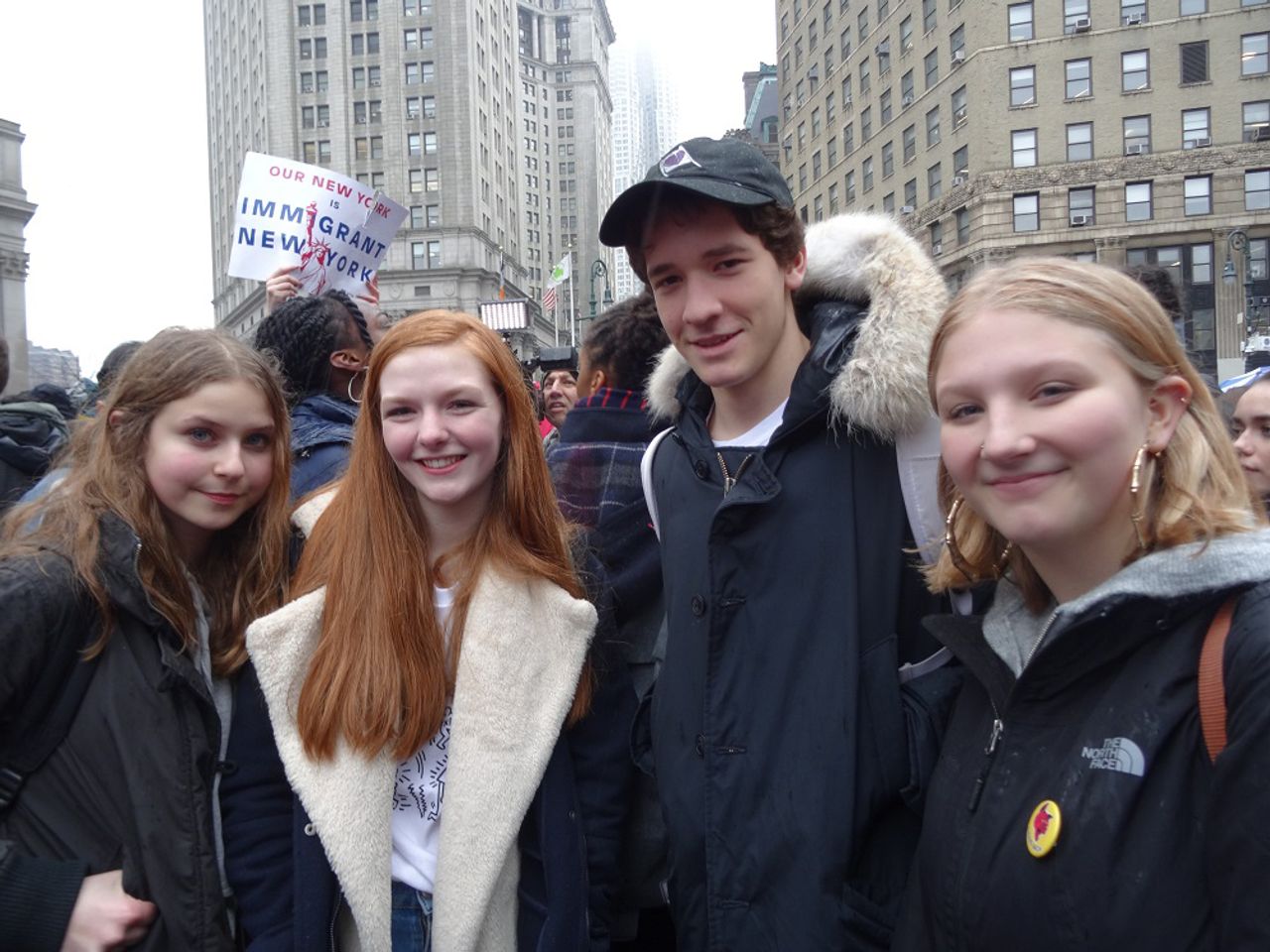 Her friend Phoebe added, “He and his whole administration are ignorant of America and the reality of the people.” Ben, another Beacon student, agreed: “We are here to show that we are against the attack on our Constitution. It is necessary to show that not all America wants Trump.” Phoebe added, “We are especially showing we are willing to walk out of school.”

“We are risking our education,” added Lucca, another Beacon student.

Henna and Yolldooz were at the demonstration from Young Women’s Leadership School of Astoria. Henna described her reason for being there: “To fight for all people in America. What Trump is doing is really bad and affecting everyone’s lives. Most of the students in my school walked out. Everyone is coming together to be one.” Yolldooz commented, “Everyone here is either a Muslim who wants their rights or they are other religions that are against the new president’s racism. I don’t know if this rally will do something but it is our effort that counts.”

A college student on leave from Stanford University, Anna, stated about the political situation, “The Democrats cater to a small minority and pretend to act for a larger public. But we are in a two-party system that has no alternatives. We are screwed. If we do not have the Democrats, we end up with Trump. Obama deported more people than Bush. No president has their hands clean. The working class has been divided so long along color lines, they don’t see each other as allies.”

By Joseph Kishore in the USA:

Week three of the Trump presidency: A crisis of bourgeois rule and turn toward dictatorship

Three extraordinary developments over the past several days have exposed the breakdown of democratic forms of rule in the United States.

On Monday, Trump delivered a political speech at MacDill Air Force Base in Tampa, Florida in which he attacked the press and implied that it was aiding the enemy by not reporting terrorist attacks. “They have their reasons and you understand that,” Trump told the military, appealing for its support. Defending his anti-Muslim travel ban, he said, “We need strong programs” to keep out “people that want to destroy us and destroy our country.”

Two days later, on Wednesday, Trump gave a speech before a police organization, the Major Cities Chiefs Association, bitterly attacking the judiciary. The appearance came on the eve of a decision by a three-judge panel of the 9th US Circuit Court of Appeals on his travel ban.

This was nothing less than a call from the US president for the police to oppose or defy an unfavorable court ruling. He underscored the point by adding, “One of the reasons I was elected was because of law and order and security… And they’re taking away our weapons one by one, that’s what they’re doing.”

In between these two speeches, on Tuesday night, Republicans in the US Senate took the extraordinary step of halting a speech by Democratic Senator Elizabeth Warren against the nomination of Senator Jeff Sessions for attorney general, the nation’s chief law enforcement official.

Warren was reading from a letter sent by Coretta Scott King, the widow of Dr. Martin Luther King Jr., to the Senate Judiciary Committee in 1986 opposing the nomination of Sessions for a federal judgeship. Republican Senators interrupted Warren, invoking an obscure rule barring senators from imputing to other senators “any conduct or motive unworthy or unbecoming a senator.” Warren was ordered to stop talking and return to her seat.

The invocation of this gag rule recalls in its own way the pre-Civil War rule established in Congress to prevent members of either house from talking about slavery on the floor of the legislative chambers. The ban on discussion of slavery was imposed because the issue was so explosive.

Each one of these events is an indication of a violent break with the most basic forms of bourgeois democracy. The first targeted the press, which is protected by the First Amendment of the Constitution; the second was an attack on the judiciary, one of the three “coequal,” according to the Constitution, branches of government; the third was an attempt to muzzle debate in Congress.

Within this context, the response of the Democratic Party is significant. When Warren was told to sit down, she complied, and no Democrat took any serious action to block the gag order. The debate continued throughout the day Wednesday, culminating in a 52–47 vote to confirm Sessions as the next attorney general.

As for Trump’s speeches before the military and police, they have been downplayed or ignored and their ominous implications covered up.

Trump’s top adviser Steve Bannon prediced war between the US and China in five to ten years over the South China Sea. Bannon, who was speaking last March on the extreme right-wing web site Breitbart, said: “There is no doubt about that. They’re taking their sandbars and making basically stationary aircraft carriers and putting missiles on those”: here.

TRUMP AIDE’S ‘AMERICA FIRST’ VIEWS UNVEILED “A senior national security official in the Trump administration wrote under a pseudonym last year that Islam is an inherently violent religion that is ‘incompatible with the modern West,’ defended the World War II-era America First Committee, which included anti-Semites, as ‘unfairly maligned,’ and called diversity ‘a source of weakness, tension and disunion.'” [HuffPost]

In recent months, as the Russian hacking scandal hit and Trump’s feud with the CIA gained ever more media attention, that Agency has proven another matter. Here is a real danger to avoid: in our efforts to delegitimize Donald Trump, it’s important not to inadvertently legitimize an outfit that most of us have long opposed for its vicious campaigns around the world. Just because Donald Trump all but called its operatives Nazis shouldn’t lead the rest of us to forget its long history of deceit or accept its pronouncements at face value because they happen to fit what we would like to believe: here.