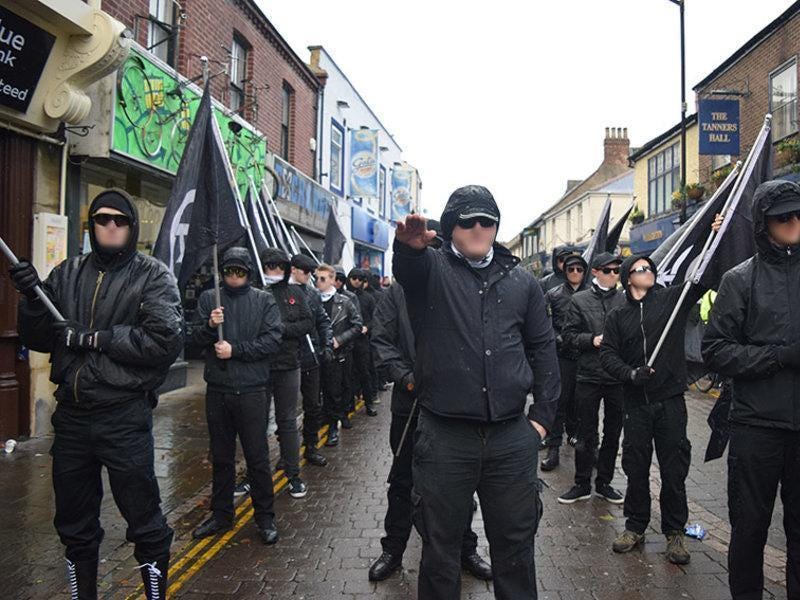 By Charlotte England in Britain today:

A British neo-Nazi group is expected to be labelled a terror organisation and banned in a landmark first for the UK.

An order proscribing fascist group National Action is due to be laid before Parliament on Monday. It will be the first time membership of a far-right group has been outlawed in the UK.

The self-styled “nationalist youth movement” has praised and glorified Thomas Mair, the white supremacist who murdered Labour MP Jo Cox in what a court described as a terrorism offence, and employs anti-Semitic language lifted direct from Adolf Hitler’s Nazi party.

The group’s Yorkshire branch, which is believed to consist of about 100 fascists, also encourages ‘lone wolf activism’ on its website, a phrase which usually refers to acts of terrorism committed by individuals.

Proscribing organisations is difficult because groups “often skirt around the law”, a senior government source told The Sunday Times. National Action, however, has been deemed to have “crossed the line and glorified terrorism”.

One tweet by the group reportedly showed a picture of Mair with the message: “ … Jo Cox would have filled Yorkshire with more subhumans!”

The group has also altered its listing on Google to read: “Death to traitors, freedom for Britain!”, a slogan which echoes the phrase Mair said in court when asked to give his name soon after being charged with Ms Cox’s murder.

Mair received a life sentence for the killing when he was convicted last month. The 53-year-old was revealed to have a Third Reich eagle monument, embellished with a swastika, and other Nazi paraphernalia in his bedroom, along with information on white supremacist neo-Nazi movements in the UK and abroad.

The Yorkshire branch of National Action has been accused of seeking to incite the murder of Jewish people, tweeting a derogatory term used by the Nazis to describe Jews during the holocaust: “Tykes gassin K#kes is our motto, #Yorkshire needs you #AntiCommunism #ProNationalSocialism #DefendBritain.”

National Action is not unique in the UK. The North West Infidels said on social media the group believes Ms Cox “got what she deserved” because of her liberal views and … urged supporters to “fight extremism with extremism”.

The British government appears to be taking the threat posed by the far-right more seriously than in the past, leading to speculation other groups could be banned in the near future.

Speaking after Mair’s conviction, Home Secretary Amber Rudd said: “I am determined that we challenge extremism in all its forms, including the evil of far right extremism.”

People at risk from far-right indoctrination now account for 25 per cent of all cases receiving help from Channel, the official scheme for those deemed likely to engage in violent extremism, The Times reported.

National Action’s monthly update for November, posted on the group’s website, dismissed reports it could be proscribed as “below discussion on grounds of extreme ignorance”.

“We neither sanction or endorse terrorism,” it said.

MPs and Peers, however, are reportedly expected to have approved the order banning the group by the end of the week.

Anyone joining or drumming up support for proscribed organisations faces criminal prosecution. Groups can also have their assets frozen.

The Home Office said: “As a matter of routine, we do not comment on whether an organisation is or is not under consideration for proscription.”

14 thoughts on “Will British nazis be considered terrorists?”