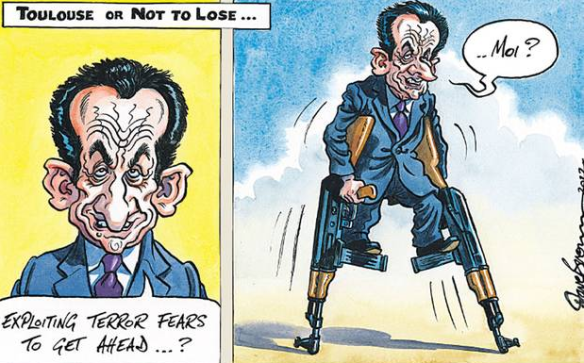 This cartoon by Jeffrey Hill shows French ex-president Nicolas Sarkozy, whipping up hysteria on terrorism in order to become president again. However, today it has turned out that he failed.

Sarkozy already knockout in first round, he will not be president again

Former French President Nicolas Sarkozy has conceded defeat in the first round of elections for the candidacy for the presidency of his party. The counting of votes is still under way, but Sarkozy has trailed the votes of the two former Prime Ministers Fillon and Juppé all night.

With 80 percent of votes counted Fillon is ahead. He has received 44 percent of the vote and Juppé stands at 28 percent. Sarkozy remains at 21 percent. The two candidates with the most votes will go through to the next round, which will be held next Sunday.

Sarkozy, for his part, had praised Trump’s election as validation of his own claims to speak for the “silent majority” and as a victory for a democracy and the principle of “listening to the people.” Trump is unpopular in France, and Sarkozy’s open support for Trump doubtless played a role in his elimination in the first round. Sarkozy explicitly centered his campaign around stigmatizing Muslims: here.

7 thoughts on “French Sarkozy rejected by his own party”