Deforestation, either to meet global demand for timber, or so land can be converted for agricultural use, is one of the biggest threats to bird biodiversity across the world. Over 60% of all bird species worldwide require forest habitats, and BirdLife estimates that figure includes some 76% of globally-threatened bird species.

BirdLife and its Partners are fighting to protect the world’s most endangered forests. You can read more about our work, and how you can help, by visiting our Emerald Forest campaign page.

If action isn’t taken, we could soon lose some of the world’s rarest and most beautiful birds forever. Below are just a handful of the vibrant, diverse species whose continued survival is threatened by the loss of their forest habitats.

Middle to upper levels of forests on the Caribbean side of Nicaragua, Costa Rica and Panama.

This curious-looking cotinga, one of Central America’s largest perching birds, has an equally curious mating display to match. When the time comes, the males form small groups and perch together to perform their unusual displays. First, they inflate a thin wattle that hangs from the bright red bald patch on their necks like a balloon. Then they lean forward and release a booming noise that sounds like a drum being hit, which resonates through the forest. Unfortunately, habitat loss, due to the expansion of cattle-ranches and logging, could see the already-scarce populations of Umbrellabird fold altogether.

The most beautiful hummingbird, endemic to Peru with a population and territory in the Valley of Uctubamba, rainforest, cloudy and very dense secondary forest in northern Peru, at an altitude of 2000 to 2900 meters above sea level, male from14 to 15 centimeter, females 9 to 10 centimeters long.

On the forest edges of a valley in remote northern Peru

This hummingbird’s puffed-up name in no way oversells the flamboyant tail feathers of the male – which consists of long, criss-crossing strands which flare out into brilliant violet-blue discs. These feathers are so cumbersome that the male can only stay airborne for a few seconds, but that’s long enough for it to perform its mesmerising courtship display, where it waves its tail around like a pair of racquets.

Unfortunately, the conspicuous dance makes males an easy target for hunters with slingshots, which may explain the uneven 5:1 female/male sex ratio. The main threat it faces however is the destruction of its habitat for marijuana and coffee cash-crops, although conservation work is underway to plant and manage new habitats so this showy species can continue to strut its stuff. 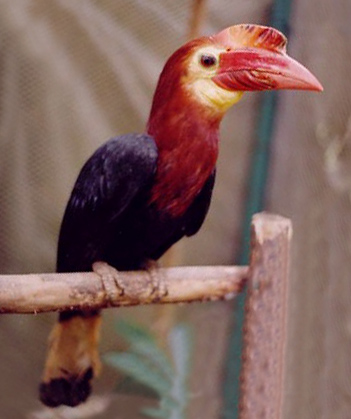 Historically endemic to the islands of Panay, Negros and Guimaras in the Philippines, although now only Panay holds a viable population.

Chronic deforestation has brought this spectacular hornbill to the brink; it is now believed extinct in Guimaras and functionally extinct in Negros, leaving the remaining population clinging to existence to the island of Panay, which now has just 6% forest cover. The Rufous-headed Hornbill is also threatened by hunting, and because the bird is slow to reproduce and requires large trees to nest in, it is struggling to survive these twin threats. Conservation efforts, including nest-wardening schemes, offer hope for the future, and the hope is captive-reared individuals can be reintroduced to Negros in the future.

Montane forest on the island of Sangihe, Indonesia

Cerulean Paradise-flycatcher? Cerulean Paradise-EYECATCHER, more like. Alas, we couldn’t find a photo that truly shows off its vivid blue plumage in all its glory, as it’s one of the rarest and most reclusive birds going. Indeed, it was once believed extinct and known with certainty only from a single specimen collected in 1873, until a small population was discovered in the south of the island in 1998. Its range is extremely small and the loss of forest to agriculture and non-native plant species continue to cast doubts on the species’ future. There is now a small bird tourism industry on the island, and the hope is that this will incentivise locals to conserve what forest remains.

This 30 June 2016 video is called Blue-Feathered Spix’s Macaw Spotted in Wild for First Time in 15 Years.

Well. Until one was discovered and filmed in Bahia, Brazil on 18th June, it was widely believed to be extinct in the wild, persisting only as captive populations in Qatar and Tenerife.

The plight of this charismatic small blue macaw entered mainstream consciousness in 2011 with the children’s film Rio, in which the last remaining male Spix’s, Blu, is sent to Brazil to mate with the last remaining female, Jewel. The sequel, Rio 2, reveals there are actually other Spix’s hidden deep within the rainforest, but this is a notion that seems fanciful even following this summer’s stunning discovery. The individual filmed is likely an escapee from captivity, as the area it was discovered in is well-known to conservationists and any skulking Spix’s colonies would have surely been discovered by now. However, observing this lone bird’s behaviour could provide insight into the challenges that lie ahead in reintroducing this species back into the wild.

This video is about a Madagascan Fish-Eagle.

Dry, deciduous forests and mangroves across the northwest coast of Madagascar.

Even some of the largest and most powerful birds on the planet aren’t immune to the devastating effects of deforestation. This bulky bird of prey likes to set up camp on large trees adjacent to inland waterbodies. The on-going development of these wetland areas into rice paddles is resulting in the ,c loss of important nesting and foraging habitat. It’s also threatened by other factors, such as trapping, shooting and getting accidentally tangled in fishing nets. Conservation action, including captive-rearing programmes and improving local law enforcement, are helping to stabilise numbers of this rare raptor.

This is a seven-coloured tanager video.

Small, fragmented remnants of the Atlantic rainforest in Eastern Brazil

This exceptional tanager seemingly faces as many threats as it has colours on its plumage; its vivid colours inevitably make it a target for the international trade industry, but it’s also facing huge, widescale habitat loss. Just two percent of Brazil’s Atlantic Forest remains standing as a result of logging and conversion into sugarcane plantations. The remaining Seven-coloured Tanager populations are now fragmented and few. And with the new roads being built in the area providing ever-easier access for poachers, the Seven-coloured Tanager is still in seven shades of trouble.