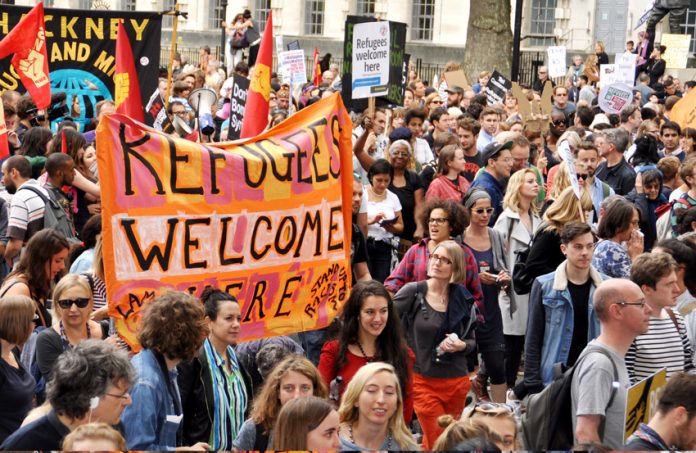 From News Line daily in Britain:

ALMOST all of the children who have spent time in the so-called ‘Jungle’ camp in Calais for refugees have a post-traumatic stress disorder (PTSD), says the Citizens UK charity.

Delays in transfers out of Calais or being housed in storage containers has left many youths with deteriorating mental health. There are also reports of children sleeping rough around the periphery of the camp.

Staff at Citizens UK say they have been sent suicidal text messages from the children, since the demolition of the refugee camp. Dr Susannah Fairweather, a psychiatrist who compiled evidence for the charity, said there had been a ‘significant deterioration in the children’s mental health,’ including a risk of suicide.

She told the Guardian: ‘As a consultant psychiatrist who has assessed children both in the “Jungle” and once they have arrived in the UK, I know the children living there experienced horrific traumas both in their home countries and their journeys there.

‘Of the children who underwent psychiatric assessment, all of them presented with psychiatric symptoms, with approximately 90% meeting the criteria for a recognised psychiatric disorder, such as PTSD and depression.’

Citizens UK says that of the 40 children being taken care of, 90% say they have ‘increased anxiety’ and over 30% report having suicidal thoughts. Just 15% of the lone children in Calais have now been transferred to Britain and 1,600 are now scattered all over France in temporary accommodation.

Last Friday, 4 November, the May Tory government said that no more children would be coming to the UK this weekend. Fairweather said: ‘The young people who have lived in the unstructured, informal camp for a prolonged period of time find it particularly difficult to adjust to life in more ordinary circumstances.

‘A temporary transfer to accommodation in France will only serve to exacerbate this.

‘The longer they are met with uncertainty from authorities about their situation, the less likely they are to trust professionals. This increases the risk that they will use unofficial systems to enter the UK, such as people smugglers.’

Many of the children are in limbo as diplomatic tensions between Paris and London continue. French President Francois Hollande is demanding that PM Theresa May and her government ‘take their share to welcome them in Britain’. However, Home Secretary Amber Rudd said it was the duty of the French government to ‘properly protect’ the children.

Meanwhile Save the Children charity has recounted another episode in the plight of refugees attempting the Mediterranean crossing. It said last Friday: ‘Two very young children, whose mother died while on board a boat ferrying refugees and migrants from North Africa to Europe, were rescued by Save the Children on Thursday 3 November as part of an operation in which more than 100 people were saved by our search and rescue vessel, the Vos Hestia.

‘Several children, including one who was as young as two, were among those on board the boat ferrying migrants and refugees. The two children who lost their mother have no other relatives with them and are now under the care of Save the Children’s on board child protection teams, who work closely with the Italian authorities. Prayers were said on board for their mother.

‘The rescue came less than 24 hours after more than 240 migrants and refugees are believed to have drowned when two rubber dinghies capsized off the North African coast, survivors told Save the Children. Only 29 people out of the at least 270 people believed to have been on board the two dinghies were pulled alive from the water. Save the Children was on hand to assist the rescue operations late on Wednesday and spotted two women who had been out at sea for hours.’

Roger Alonso, Save the Children’s team leader on the Vos Hestia said: ‘There are no words to describe the horrific events we have witnessed over the past 24 hours. We’ve seen a mother in utter shock, unable to speak after losing her baby. Two young children have witnessed their mother die in unspeakable circumstances.

‘These mothers left Africa with their children with hopes of a better future – it cost them their lives. Our team is now doing everything they can to provide support to these children, including psychological care. This needless loss of life highlights the perverse impact of current EU policy, which is focused on protecting borders rather than providing to refugees and migrants, especially those most vulnerable, legal and safe ways to reach sanctuary in our countries.’

The charity stressed: ‘Save the Children has repeatedly called for the EU to provide safe and legal routes into Europe, such as resettlement, humanitarian visas and other forms of humanitarian admissions, which should help to ensure minimum standards of protection, especially for children.

‘So far, 2016 has been the deadliest year on record for those crossing the Mediterranean, and if the number of casualties from the latest shipwreck is confirmed, more than 4,100 people will have died trying to make it to Europe from North Africa.

‘The journey is so dangerous that the likelihood of dying while trying to make the crossing is now one for every 47 arrivals.

‘Save the Children have rescued more than 1,300 people, including more than 200 children, and is continuing to conduct its life saving-operations to help prevent more people losing their lives at sea.’

UNHCR, the UN Refugee Agency, has opened a new camp in Hasansham to house newly displaced Iraqi families fleeing the military offensive in Mosul. Some 3,000 people were received at the camp last Friday and all families are being allocated a tent and receiving assistance.

At present 450 tents – enough to shelter 2,700 people – are available and 500 tents will be erected per day to house additional arrivals. The camp will be able to house 1,800 families, almost 11,000 people. Friday’s new arrivals are among an estimated 8,000 people who arrived to Khazer and Hasansham camps in the past three days.

Many have come from Gogjali and other areas on the eastern outskirts of Mosul, which saw fierce fighting three days ago and is now under the control of the Iraqi Security Forces. Frederic Cussigh, UNHCR’s Senior Field Coordinator, was in Hasansham Camp as it opened and witnessed the arrivals.

He said last Friday: ‘People arrived with nothing or next to nothing, exhausted but relieved to find safety and receive help. Everyone who arrived today will be allocated a tent and receive water and a hot meal.’

Sultan Ghassem, a 47-year-old metalworker from Gogjali, Mosul, said: ‘We left home three days ago to escape the mortars falling all around us. For the last two years we haven’t had even the basics of life, only oppression. There was no money, no work. We sold everything we owned just to eat. The only reason nothing happened to me is because I stayed in my home all the time.’

Shmala Hamdi, a 50-year-old housewife from Gogjali, said: ‘We spent two days hiding in a corner of our house sheltering from the bullets and bombs. We left our home this morning as soon as the fighting was over we fled and came straight to this camp. The last two and a half years have been no kind of life.

‘We weren’t allowed out of the house, and the boredom ate away at our souls. Now we feel safe, and I’m looking forward to sleeping properly for the first time in months. I’m worried about living in a tent during winter, but as soon as it’s safe we will go back home.’

Hasansham is one of 11 camps UNHCR is building in order to respond to an anticipated large-scale displacement from Mosul. Five camps are now ready to receive people fleeing the city.

Rumbles in The Jungle. BETHANY RIELLY sees a hard-hitting depiction of the camp in Calais which castigates governments that have turned a blind eye to the plight of refugees: here.

BRITAIN has paid France hundreds of millions of pounds to increase border security, with the cash flowing into the pockets of military and security companies, campaigners revealed today. French authorities have been clearing refugee settlements in Calais over the last two weeks, while the British Border Force began using drones to spot and stop migrant boats from crossing the Channel: here.