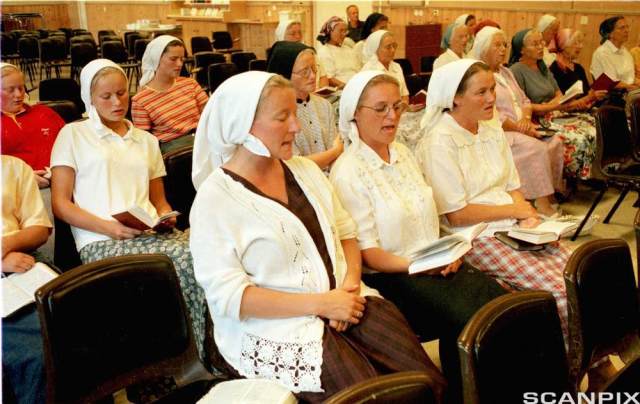 This photo from Norway does not depict Roman Catholic nuns. It also does not depict conservative Muslim women, or ultra orthodox Jewish women. It depicts female members of the Brunstad Christian Church, in religiously ordained ‘modest’ clothes.

The Brunstad Christian Church are a fundamentalist, homophobic group. In the Netherlands, there are recent reports about financial fraud, child labour and tax dodging in this church.

They have controversies in Norway, where their international headquarters is, as well.

A German volunteer worker suffered fractured vertebrae after a work accident on a billion krone project of Brunstad Christian Church in Vestfold province. Both he and 34 other people from all over Europe were on long-term volunteer contracts for the Smiths Friends’ company Ryenstubben 2 [in Oslo].

Before Christmas last year Byggeindustrien magazine wrote a series of articles about a number of companies associated with Brunstad Christian Church (BCC) – also known as Smith‘s Friends – who earn millions on commercial assignments carried out by volunteers.

On the basis of the articles the Labour Inspectorate audited one of the companies – Fjord Team AS.

In the years between 2009 and 2014 Fjord Team, owned by BKM Sandefjord, had a turnover of nearly 50 million.

A large part of the revenues were derived from the sale of five villas where construction work had been done by volunteers.

The Labour Inspectorate concluded recently that the company has broken the Working Environment Act, and has imposed on Fjord Team to pay workers who work within the generally applicable areas the minimum wage.

The church also has over 102 children’s, sports and youth organizations, each of which can do volunteer work for many millions of tax-free money.

‘Religious’ child labour is not just a problem in the Brunstad Christian Church. It exists in the Church of Scientology (which, according to critics, is more of an exploitative corporation than a real church) as well.