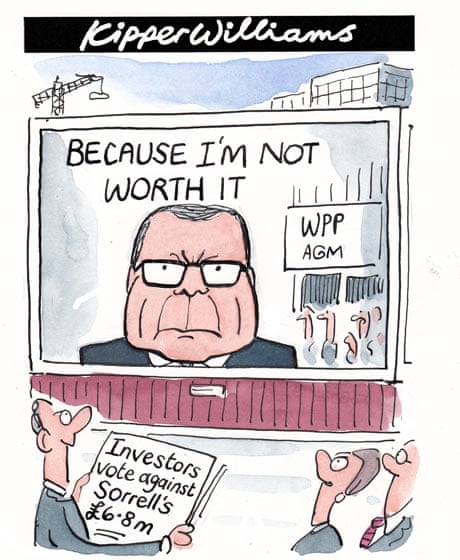 The CEO of marketing multinational WPP Sir Martin Sorrell was paid £70 million in 2015, more than 2,500 times the average British salary and equivalent to £38,437 per hour.

One of WPP’s brands is public relations business Hill & Knowlton; infamous for its lies on behalf of the tobacco industry and in support of the 1991 Gulf War; when they, eg, had a Kuwaiti ruling family member, not identified as such, lie that Iraqis had supposedly killed Kuwaiti babies in incubators.

The research also showed that the average boss of a FTSE 100 company rakes in 123 times the average full-time salary, with the median FTSE director’s pay package, excluding pensions, soaring by 47 per cent in the five years to 2015 to £3.4 m while average wages rose by a measly 7 per cent.

The report found the gap between low-paid workers and top directors “even starker.” The average FTSE 100 boss earns a year’s worth of the minimum wage in just a day.

Companies with high pay inequality between bosses and workers perform worse, according to academics such as the Centre for Globalisation Research. TUC general secretary Frances O’Grady said: “While millions of UK families have seen their living standards squeezed, directors’ pay has reached stratospheric levels.

“These shocking new figures show why (Prime Minister) Theresa May must deliver on her promise to put workers on company boards.

“This would inject a much-needed dose of reality into boardrooms and help put the brakes on the multimillion pay packages that have damaged the reputation of corporate Britain.

“Other European countries already require workers on boards, so UK firms have nothing to fear. It improves performance and contributes to companies’ long-term success.”

Trade unionists at the TUC Congress in Brighton will debate policy on securing fair pay and a living wage for workers this morning.

A government spokesman said Ms May addressed corporate pay at the G20 summit earlier this week.

She said: “To restore greater fairness, we will bring forward a consultation this autumn on measures to tackle corporate irresponsibility, cracking down on excessive corporate pay and poor corporate governance, and giving employees and customers representation on company boards.”

So, these are Ms May’s words. However, the actions so far by Ms May and by her husband point into another direction.