This 2 June 2016 video is about a Camarasaurus and other dinosaurs at Naturalis museum in Leiden in the Netherlands.

This morning, a Tyrannosaurus rex skeleton, excavated in Montana in the USA, arrived at Schiphol airport in the Netherlands.

From Schiphol, it continued to Naturalis museum, preceded by paleontologists/biologists Anne Schulp and Freek Vonk, cheerleaders, a brass band, police and a flowery Tyrannosaurus on a float. 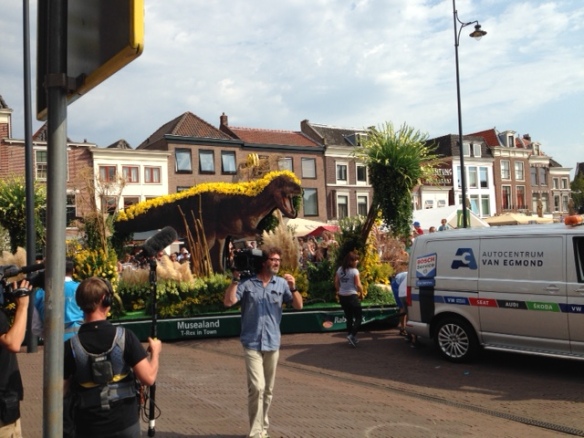 This photo of the float is a cell phone picture, like the others in this blog post.

They proceeded to a welcome party at Beestenmarkt square in Leiden, where hundreds of school children and others were expecting the tyrannosaur, named Trix.

People had to move back, as a fence had to be moved, as there was not enough space for the float to pass between the fence and a lamppost.

Behind the float was the truck with the fossil Tyrannosaurus rex skeleton.