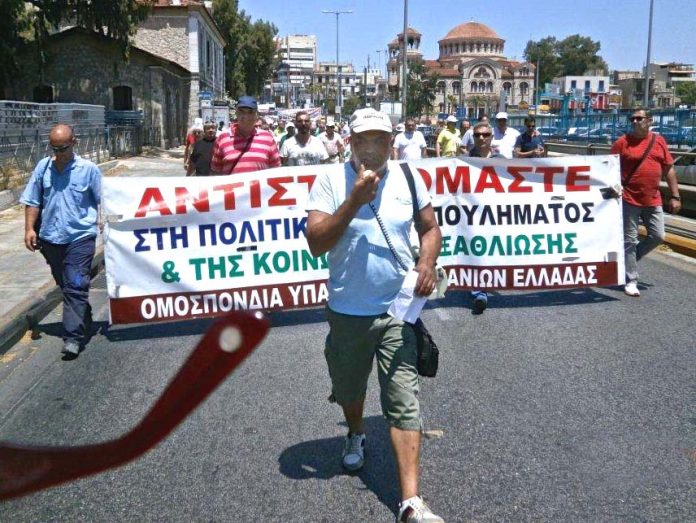 DOCKWORKERS of the two main Greek ports of Piraeus and Thessaloniki have completed one month of strike action against privatisation and consequent dramatic change in labour conditions.

Next week the SYRIZA-ANEL Greek coalition government of Prime Minister Alexis Tsipras is to verify in the Vouli (Greek parliament) the selling off of the Piraeus port, the biggest in the eastern Mediterranean, to the Chinese state company COSCO which already owns two docks in the commercial port.

Last Thursday, hundreds of dockworkers marched under a scorching sun through the Piraeus port to the Ministry for Naval Affairs.

… Yiorghos Yeorgakopoulos, the President of the OMYLE federation of dockers and port workers, said that the government work hand-in-hand with COSCO and big business to sell off everything. He insisted on building up the union to prepare for the great battles ahead.

… In the port of Piraeus, there are still over 1,000 refugees who live in appalling conditions in tents with nowhere to go.

In the refugee camps on the Greek island of Khios and Lesbos there is a continuous tension and fights as refugees demand their freedom. A 32-year-old Egyptian refugee was stabbed to death on Thursday morning inside the Souda refugee camp on Khios. Authorities said that he was killed in a fight.