He rarely went on vacation, but in 1905 he clearly needed it. The 23-year-old Pablo Picasso (1881-1973) fled the heat and bustle of Paris. To this rare vacation the Alkmaar Municipal Museum is dedicating an exhibition.

Picasso was staying for several weeks in Schoorl, at the cottage of his acquaintance Tom Schilperoort. He knew the Dutchman from Paris. The self-styled bohemian and journalist had seen it correctly: Picasso craved inspiration.

He worked on his famous Famille de Saltimbanques. The composition and the background he did not like, but how should he change that? He was not sure yet. With in his luggage a sketchbook, brush and some paint he took the train and in Alkmaar he got out. Probably in June and almost certainly on a Friday when the cheese market is.

Pyramids of cheese: he will remember them years later in amazement. Just like the Dutch women. Tall and glowing with health.

Picasso walked through Alkmaar. “It was a provincial town where the farmers did their shopping,” says historian Gerrit Valk, who has done years of research into the fascinating Holland weeks of the master. “There were many women in West Frisian costume.” White caps, skirts, clogs come back in the sketches that Picasso makes. As a tourist he draws the windmills, the stepped gables of the houses along the canals of Alkmaar and a visitor with a prostitute in a brothel in Alkmaar.

The cottage in Schoorl is gone, but there exists a picture of the interior with Schilperoort, Picasso and a certain Nelly. Most likely she was Petronella Timmer, who kept the cottages clean. In the seaside village Picasso is impressed by the light, the dunes and the color of the sand and arid pasture.

About the women he would say later that they rolled off the dunes. He probably has seen the traditional ‘girls market’, where the peasant girls danced and drank and rolled while flirting off the dunes they had climbed and started dating.

The summer-house was too stuffy for Picasso, so he rented a room in Schoorldam. He is found much in the local pub Lands Welvaren. There a special chair was bought for him without arm rests, as these bothered him while drawing. After the departure of Picasso the chair disappeared into the attic, but it remained in the family.

Recently, the Picasso chair was donated to the Stedelijk Museum Alkmaar. This was for director Lidewij de Koekkoek the stimulus to make a long-cherished wish come true. To make a modest exhibition on the holiday of the world famous painter.

“This is a dream come true,” she says radiantly as the nude La Belle Hollandaise is unzipped with utmost care. An employee of the museum in Brisbane, Australia supervises and controls the work, every square centimeter of it, before it can hang. It is put alongside the other gouache Picasso made in West Friesland Les Trois Hollandaises from the Picasso Museum in Paris. We have to guess who the three women are. Possibly, it is always the same woman, but then in a different position. 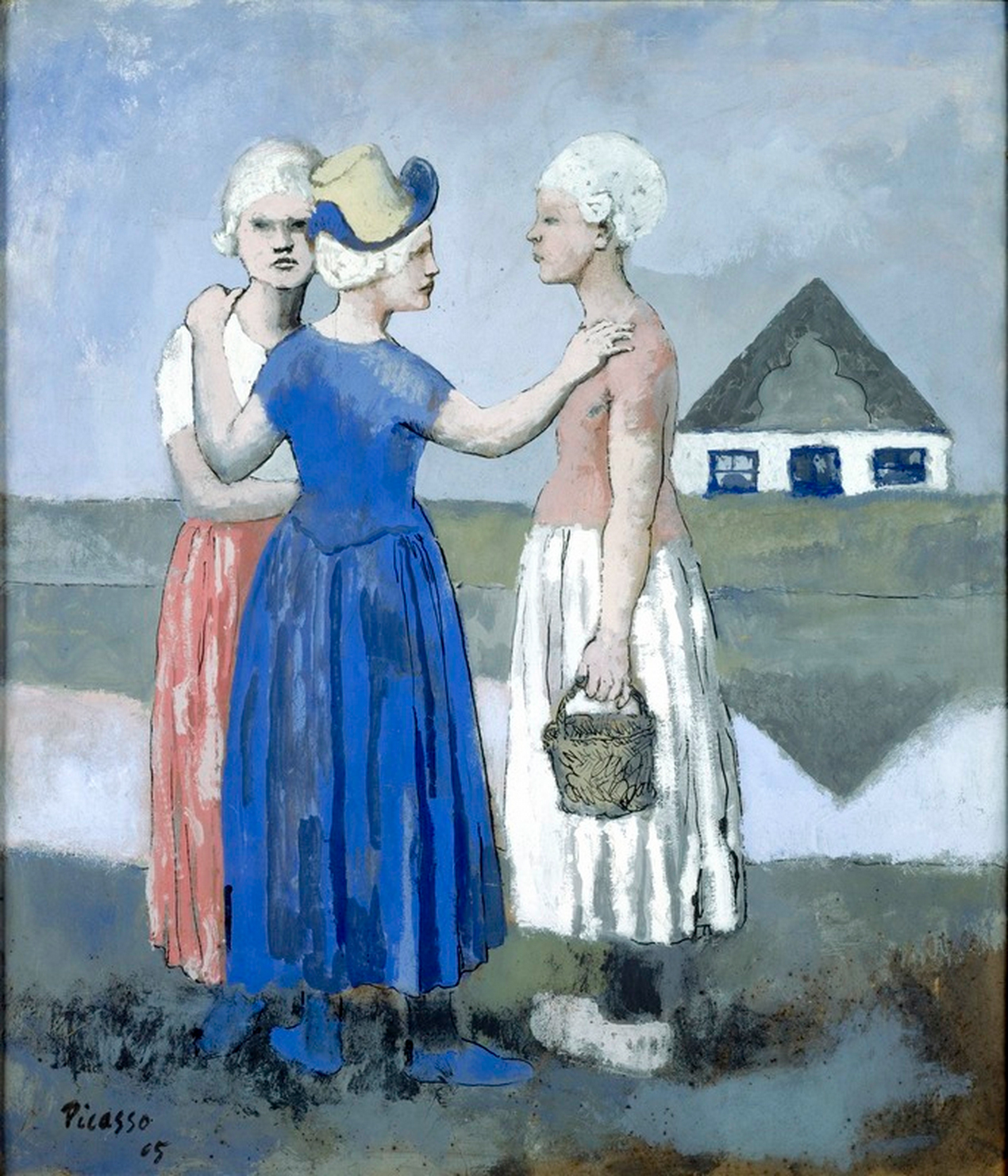 Even more interesting would be to know who was the model for the nude. In prudish West Friesland a girl took her clothes off in front of Picasso and kept only her white lace cap on. Lidewij de Koekkoek sees the work for the first time and is moved by it. Now that it hangs, all sorts of details become remarkable. The dreamy look in her eyes. Was she in love? Was the Spanish painter her lover? And the way the girl bends the fingers of her hand, does she indicate that she is pregnant?

Picasso’s holiday in Holland lasted only a few weeks. But short as that was, the period had an influence on his development as an artist. After his return he finished the world famous painting of the acrobat family Famille de Saltimbanques. The background was changed: he put the circus artists in a dune landscape. In the background there are unmistakably dunes such as near the North Sea beach.

The exhibition Picasso in Holland is until 28 August at the Stedelijk Museum in Alkmaar. 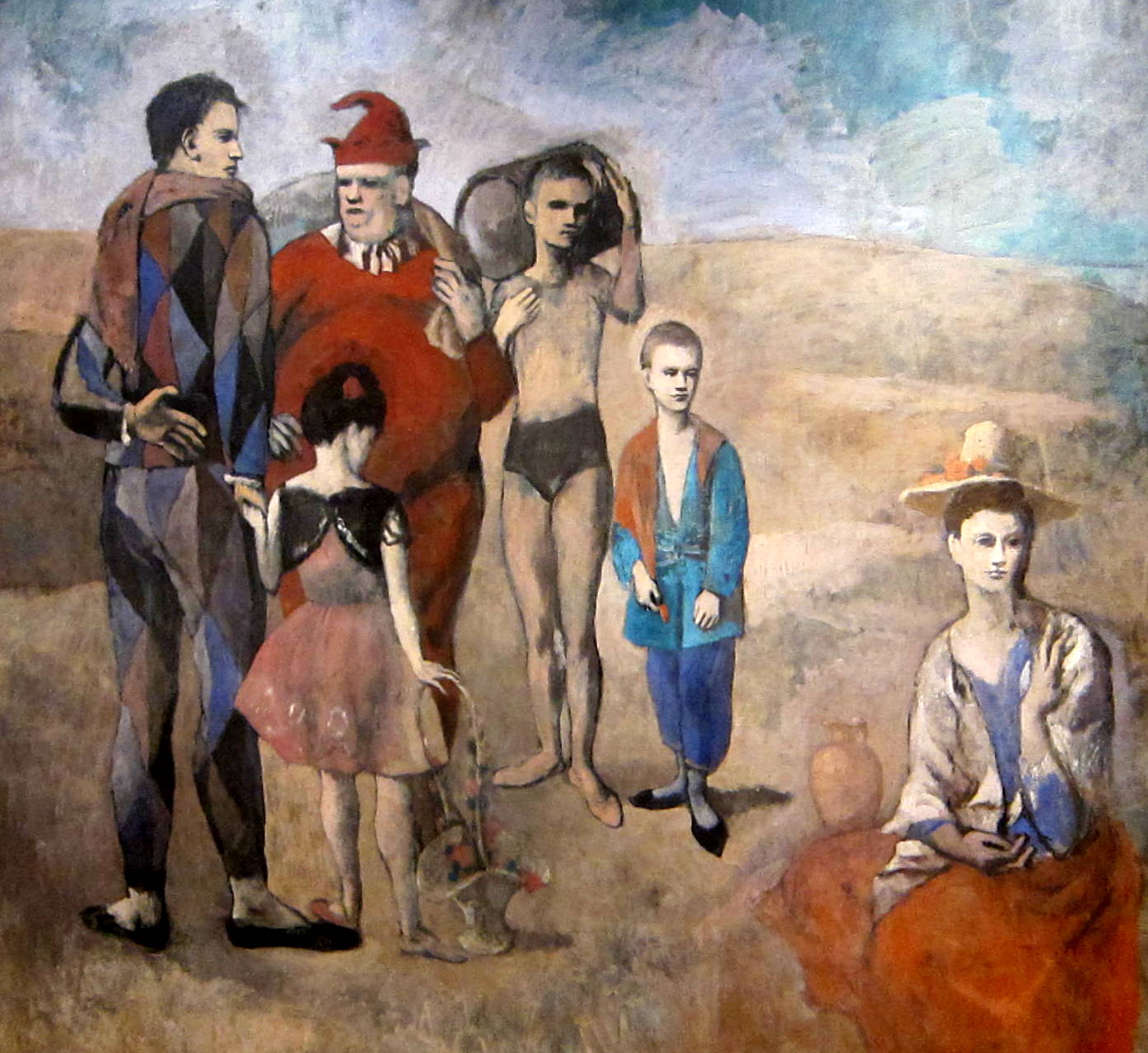