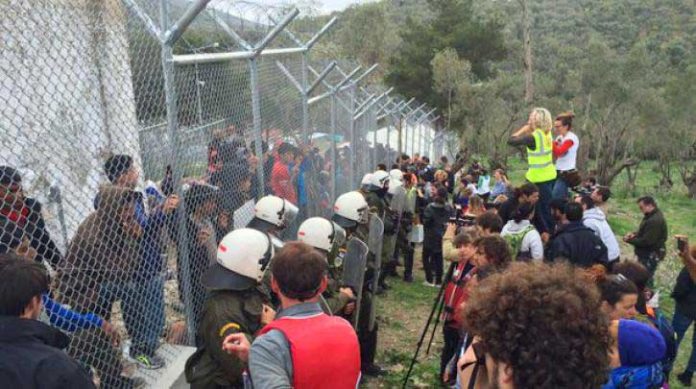 Army & police will be deployed in the removal of refugees

REFUGEES staged protests shouting ‘freedom’, in English, last Wednesday and Thursday, at the main gate of the Moria village ‘Detention Centre,’ that is, concentration camp, on the island of Lesbos. Greek riot police prevented them from leaving the camp.

Outside of the Moria camp’s main gate villagers and aid volunteers staged solidarity rallies. It is estimated that over 1,500 refugees have been put in the Moria concentration camp to be expelled en masse in accordance with the EU-Turkey agreement.

Both the United Nations’ Refugee Council (UNHCR) and the Doctors Without Borders have ceased collaborating with the Greek authorities on the ‘detention centres’ as well as on the vast refugee settlement at Idomeni on the Greek/Macedonian border.

Save the Children has stopped collaboration as well.

The head of the Greek section of Doctors without Borders, Marietta Provopoulou, stated on Thursday that ‘we are refusing to be related to a cynical mechanism which puts the right to asylum in danger’. She said that they will still help refugees independently.

The Greek Public Order Minister, Nikos Toskas, has confirmed that the Greek government is planning to remove all 13,000 refugees from Idomeni to ‘camps’. He said that both the army and the police will be employed in the removal of refugees but ‘peacefully’.

The Greek Minister for Migration Policy Yiannis Mouzalas, a physician, stated that ‘I cannot rule out the possibility that children may die at Idomeni! What I can guarantee is that we are raising our efforts so that won’t happen,’ Mouzalas said.

Greek refugee camp is ‘as bad as a Nazi concentration camp‘, says [Greek interior] minister. ‘I do not hesitate to say that this is a modern-day Dachau‘, says Panagiotis Kouroublis: here.

THE agreement between the EU and Turkey on dealing with the hundreds of thousands of refugees fleeing imperialist-inspired wars in the Middle East has quickly revealed itself to be nothing less than a blueprint for concentration camps in Greece and the forcible ‘repatriation’ of refugees back to the killing grounds they fled.

Under the agreement, refugees already in Greece will be forcibly sent back to Turkey and whilst awaiting deportation they are to be herded by police and army into military-controlled concentration camps.

This has proved too much for the aid agencies who deliver humanitarian relief to refugees and who work in war zones throughout the world.

Medicins Sans Frontieres (MSF), which has a record of bringing aid to vulnerable people in the most dangerous parts of the world, this week announced that it was shutting down its operations in Greek camps saying that the EU/Turkish plan is so inhumane that it would refuse to work with it.

In a statement MSF said: ‘We will not allow our assistance to be instrumentalised for a mass expulsion operation, and we refuse to be part of a system that has no regard for the humanitarian or protection needs of asylum seekers and migrants.’

MSF is not alone amongst aid agencies boycotting these concentration camps masquerading as ‘detention centres’. The UN refugee agency UNHCR, Save the Children and the International Rescue Committee (IRC) have all withdrawn their support from these camps.

The IRC told the Greek coastguard that they would ‘not transport the world’s most vulnerable people to a place where their freedom of movement is impeded upon’.

Instead the IRC is transporting those refugees it saves from drowning to areas outside of the camps.

The mass expulsions of refugees to Turkey has also been denounced by Amnesty International which has pointed out that Turkish law forbids Iraqis and Afghans from obtaining refugee status and has already deported them back to the countries where they face certain persecution.

Syrian nationals, who are permitted refugee status in Turkey, will fare no better. The charity Human Rights Watch has recorded numerous incidents of Syrian refugees being pushed back into the war zones of Syria. All this is completely outside international law which forbids sending refugees back to the dangers they are fleeing.

The unanimous refusal of the aid agencies to be complicit in their ‘inhuman’ and illegal agreement graphically illustrates the barbarity being meted out to the victims of imperialism’s wars to re-order and re-conquer the region. This same barbarity is behind the attacks by the ruling class against the workers of their own countries.

The Greek police who are being used to force refugees into camps are the same police used by the Greek state to break the heads of strikers fighting the savage austerity measures demanded by the EU and central bankers.

In the UK, prime minister David Cameron, who is determined to send the Royal Navy to drive refugees fleeing the carnage British and French imperialism created in Libya back to the hell hole they created in that country, is simultaneously driving a war against the working class at home through smashing the welfare state and the NHS.

The capitalist class is attempting to create an armed fortress of Europe with concentration camps and borders guarded by barbed wire to keep the victims of its wars out while at the same time waging brutal wars of austerity against workers.

The working class of Britain and Europe must reject any complicity in this barbarism and demand that the borders be opened and the camps be closed. Refugees are not the enemy. The enemy is a bankrupt capitalist system that can only survive by dumping its crisis on the backs of workers and the people of the world.

There are currently over 17,000 refugees held in appalling conditions on the Greek islands of Chios, Samos, Lesbos, Kos and Leros. They are caged in detention centres that have the capacity for only 6,000 people. The most notorious of these is the Moria camp on Lesbos, recently described by the BBC as “the worst refugee camp in the world.” With a capacity of just over 3,000, the camp’s inmates total three times that number, with a third of them children: here.