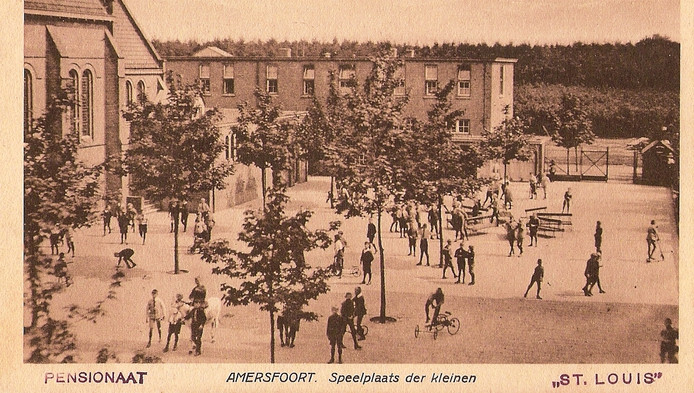 Translated from Algemeen Dagblad daily in the Netherlands:

Amersfoort monastery turns out to be paedophile boarding school

Amersfoort boarding school Saint Louis was in the 1950s and 1960s the setting of years of sexual abuse of dozens of boys. One of the boys abused then, Pieter C. (60) from Antwerp, was recently exposed as one of the ringleaders of an international child pornography network.

“He said: Just think of Jesus on the cross, which was much harder than for you, who has died for you.

Pieter C. is also said to have adopted children from an orphanage in Cambodia whom he abused later. He will be in court for that this Thursday. He may be jailed for 16 years for that.

UPDATE: Pieter C. has been convicted to 19 years in prison.

The man stated that his “sexual deviation” is because he was sexually abused at age 12 by a friar.

On the Internet, victims of the Friars of the Immaculate Conception of the Holy Virgin Mary share stories with each other. ‘I’ve never spoken about this. I was abused in 1965 for two years by Friar Felicius. He was the dormitory friar. I thought I was a dirty little boy and that I deserved punishment. Also, I was afraid I would not go to heaven, and that made me more afraid.’

In one of many reports by the compensation commission there is an anonymous discussion about a friar of Saint Louis and a 13-year-old victim. ‘After the first year in the institution the father of the boy died. When he returned to the dormitory he was assigned a chambrette (a place to sleep separated with curtains from the dormitory) next to the friar. Due to the death of his father he got extra attention from the friar. He eventually was sexually abused for two years, about three times a week.’

Friar Simplicius would treat boys in the 1960s because of soreness and eczema and molested them during these activities. Friar Gratian, also known as Friar ‘doorman’, abused the same boy for two years. Another friar would fondle the boys when they were in bed. He also made the hundreds of boys in the dormitory at the boarding school sleep without pajamas and underwear, because of ‘hygiene’.

The brother who was the nurse in the boarding school, Arvatius, ordered the boys, even those with throat complaints, to always stand naked before him. If the boys wanted to hide their genitals, they were punished by having to stand naked for a long time with outstretched arms in his room. ‘Just think of Jesus on the cross, which was much harder than for you, who died for you,’ the friar reportedly said. One violent story after another, told by the victims after years of silence. ‘I can even remember that two friars had drugged and abused a boy’, writes one of the victims.

Amersfoort injury lawyer Martin de Witte of SAP Lawyers has assisted several victims of sexual abuse by clerics in their case against the church. ‘The hard part of this business is that they are time barred and it is difficult to collect evidence. Those who have no proof will just get a small compensation. But if there is evidence, a statement from a witness or documents, then the compensation may be up to 100,000 euros. But the resistance of the church to admitting the actions of their friars is still big.’

Saint Louis boarding school closed in 1975. The school had 376 students in 1952 and 38 friars. In the report of the Deetman commission an entire chapter is devoted to the activities of the Friars of the Immaculate Conception of the Holy Virgin Mary, including in their Amersfoort boarding school.

In that chapter is specifically written about Friar Simplicius, who is said to have been caught repeatedly while fondling boys. In the report is the reaction by the chief of the Institute: ‘Quick intervention is desired. The boy in question is from a respectable family and will certainly not be silent on this issue to his parents.

Implying that, if the boy would have been from a poor family, then there might have been more of a chance of not telling his parents about the abuse, or of the boy being dismissed as a liar.

I would mind very much if the boarding school St. Louis would get negative publicity again. The weakness of this brother should be forgiven a priori, but in this job he is too unstable. The facts are known to seven boys. To all seven, he has done the same things several times a night. Thank God they have not told that to anyone else.’

The Congregation of Friars of the Immaculate Conception of the Holy Virgin Mary was unavailable for comment.

Abuse by friars of the same congregation in Zevenaar: here.

Or maybe, some people might say that all female Roman Catholics should be punished similarly, as there are documented cases of nuns abusing children sexually; and probably of Roman Catholic laywomen as well.

Fortunately, I have not heard anyone propose such moronic discriminatory measures.

Then, why are such moronic discriminatory measures not only proposed, but also enforced, against refugees in Germany, in Denmark and elsewhere? As revenge for sexual harassment in Cologne mainly by non-refugees?

There is another difference between reactions to the Cologne crimes and to the Amersfoort crimes. In the Cologne case, there were many accusations of cover up, as international corporate media and politicians only started talking much about the crimes after four days. In the Amersfoort case, there was cover up for forty years and longer. For so long that some perpetrators have died without ever being indicted. While perpetrators who are still alive won’t be indicted because of the time bar.