This video from Oregon in the USA says about itself:

The other birds are western grebes with chicks.

By Niles Williamson in the USA:

On Saturday, approximately two dozen armed, right-wing militia members took control of an unoccupied visitors’ center at the Malheur National Wildlife Refuge, a federal nature preserve approximately 30 miles south of the city of Burns in sparsely populated Harney County, Oregon. The action is being carried out in protest against restrictions on government-controlled land.

The Malheur occupation began after a march by some 300 people in Burns to protest the reimprisonment of ranchers Dwight Hammond, 73, and his son Steven Hammond, 46, who were convicted in 2012 of setting fires on federal lands in 2001 and 2006.

Despite the protest and ongoing occupation, both Dwight and Steven Hammond voluntarily reported to prison Monday, while their lawyers sought clemency from President Obama. Suzie Hammond, Dwight Hammond’s wife, told Fox News that her family had no role in the occupation and she was not planning to visit the militiamen occupying Malheur.

The group, known as Citizens for Constitutional Freedom, is led by Ammon and Ryan Bundy, the sons of Nevada rancher Cliven Bundy. Speaking to the Oregonian Saturday night, Ammon Bundy said the group was “planning on staying here for years, absolutely.” He added, “This is not a decision we’ve made at the last minute.”

The Bundy family gained notoriety in 2014 after it rallied support among militia members in a standoff with the Bureau of Land Management (BLM) over grazing rights on federal property. The family successfully forced BLM agents to back down, an outcome that emboldened far-right elements throughout the country. …

While the occupation by the Citizens for Constitutional Freedom has so far attracted a very limited number of people, the group has been given substantial media coverage. Right-wing militia groups enjoy a sympathetic ear from sections of the Republican Party and the military. For all their attempts to portray themselves as common citizens, it is clear that they are working with experienced political forces.

During the standoff in 2014, which was covered extensively by Fox News, the Bundys received support from a number of Republican politicians, including Senators Ted Cruz and Rand Paul, both now seeking their party’s nomination for president. The Bundy family, in turn, has donated money to the campaigns of both of Rand Paul and his father Ron Paul.

Ammon Bundy and the other militia members may couch their appeals in populist language, but they have a definite right-wing political agenda and see the Malheur occupation as an event that can strengthen and rally far-right forces.

In this context, it is notable that the response of the Obama administration and state law enforcement agencies is vastly different from what normally occurs when there are popular protests reflecting mass grievances, particularly over incidents of police violence.

The first official response from the White House to the occupation came on Monday and was decidedly low-key. White House Press Secretary Josh Earnest acknowledged that President Obama was aware of the situation and that the FBI was monitoring the situation and providing aid to local authorities, but insisted that the seizure of federal property remained a “local matter.” …

Harney County Sheriff Dave Ward released a statement Saturday urging residents to stay away from the area and maintain a “peaceful and united front.” He also warned that the group had “alternative motives to attempt to overthrow the county and federal government in hopes to spark a movement across the United States.”

There is a palpable sense that federal and local officials are wary of generating any broader sympathy for the militiamen. The FBI released a statement indicating that it was working with the Harney County Sheriff’s Office and Oregon State Police to “bring a peaceful resolution to the situation.”

Bloody assaults by federal agents on Ruby Ridge in northern Idaho in 1992 and the Branch Davidian compound in Waco, Texas in 1993 fueled the growth of the right-wing militia movements throughout the US, culminating in the 1995 Oklahoma City bombing by Timothy McVeigh, which killed 168 people and wounded more than 680 others.

According to the Southern Poverty Law Center, the anti-government militia movement has experienced a notable growth in the last year, expanding from 202 to 276 known active organizations. With the onset of the economic crisis in 2008 and the election of Obama, the first African American president, the number of militia groups grew dramatically from 42 to a peak of 334 in 2011. …

To the extent that far-right tendencies can cast themselves as victims of government violence, they do so under conditions where much broader popular protests are severely limited and suppressed and genuine grievances cannot find a progressive outlet within the political or media establishment.

People are mocking the Oregon ‘militia’ on social media by calling them ‘YallQaeda‘ and ‘VanillaISIS‘: here. 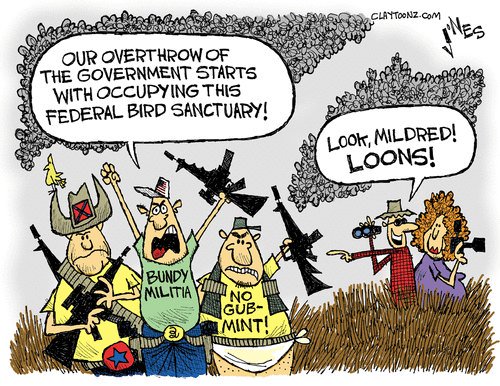 Tribe Member: ‘We Would Have Been Dead By Now’ If We Acted Like Oregon Militants

The Oregon ‘Militia’ Needs Food, So I Mailed Them Pictures Of It. A picture is worth a thousand words. It tastes like paper, though: here.

ONE KILLED, SEVEN ARRESTED IN OREGON MILITANT STANDOFF “Ammon Bundy, leader of the month-long militant occupation of the Malheur National Wildlife Refuge in Burns, Oregon, was arrested Tuesday in a highway confrontation with law enforcement that killed one of his followers and wounded another, according to the FBI.” [Nick Visser, HuffPost]

THREE MORE ARRESTED IN OREGON STANDOFF AS AMMON BUNDY URGES REST TO STAND DOWN The detained leader of the movement asked his followers to “Please stand down. Go home and hug your families.” The militants have occupied the federal building in Oregon for the past month. [Ryan Reilly, HuffPost]