This 2013 video from Oregon in the USA is about the Malheur Wildlife Refuge. It was established by (Republican) President Theodore Roosevelt in 2008.

A HEAVILY armed band of right-wing extremists seized a government building in the US state of Oregon on Saturday in protest at the jailing of two ranchers for arson.

However, the Hammond family, the Oregon ranchers at the center of the dispute, have denounced this occupation by the outsider gunmen.

The 150 gunmen occupied the headquarters of the the Malheur National Wildlife Refuge on Saturday, vowing to stay “for years.”

They include three sons of Nevada rancher Cliven Bundy, who was at the centre of a mass armed stand-off with the Bureau of Land Management in 2014 over $1 million (£677,000) he owes in grazing fees in Gold Butte, a proposed conservation area.

“We’re going to be freeing these lands up, and getting ranchers back to ranching, getting the loggers back to logging, getting the miners back to mining … under the protection of the people and not be afraid of this tyranny that’s been set upon them,” said Mr Bundy’s son Ammon in a Facebook video.

Ammon and his brother Ryan told reporters they had not ruled out violence if police tried to remove them.

Dwight Hammond and his son Steven admitted setting fires in 2001 and 2006, claiming it was to control weeds and protect their property from wildfires.

Police did not believe that, and said the fires were for poaching.

In this 2013 video, biologist Steve Herman talks about the impact of cattle on birds in Malheur National Wildlife Refuge.

The pair were convicted three years ago, with the elder Mr Hammond serving three months and his son one year.

But a judge ruled their sentences too lenient under federal law and ordered them to serve an additional four years each.

GUNMEN SEIZE FEDERAL BUILDING IN OREGON “A group of gunmen seized control of an empty federal building in remote Burns, Oregon, on Saturday, announced they planned to occupy the facility for ‘years’ and called for ‘patriots‘ to join them — and bring more guns. The men now occupying the Malheur National Wildlife Refuge building include at least two sons of Cliven Bundy, the rancher whose legal battle with the government over grazing rights culminated in an armed standoff with federal authorities near Bunkerville, Nevada, in 2014.” [Nick Baumann, Igor Bobic, Jessica Schulberg, HuffPost]

If these gunmen, popularly called in the USA “YallQaeda”, would have had names like Ali or Abdullah, an/or if they would not have been white, then they would already have been shot dead by now. 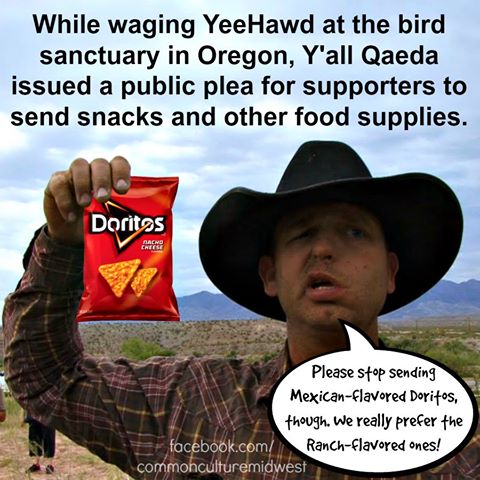 Perverted interpretation of US Constitution used to justify occupation of wildlife refuge: here.