On 26 December 2015, to Corversbos and Gooilust nature reserves. This photo shows a spot in Gooilust where birds often come to drink. Like the other photos in this blog post, this is a wide-angle lens photo.

In Corversbos, a robin near a fence. And a male and a female blackbird on a field.

We arrived at the water where birds often drink. Great tits; a blue tit. A robin on the bank. A chaffinch.

A bit further was a flowering witch-hazel tree; and still further, another one.

They normally bloom in January-March. Not as early as December.

We continued. Egyptian geese in a meadow.

As the camera setting changed from colours to black and white, we arrived at the pond, where one can see dragonflies in summer, but not now.

Near the exit of Gooilust, some old trees had been logged.

A grey heron on the bank of a ditch. Behind it, on a meadow, a flock of grey lag geese. 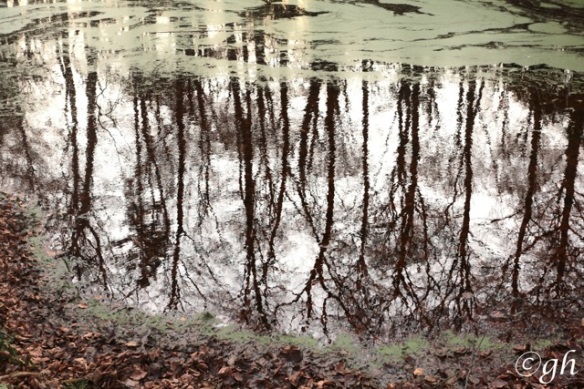 Finally, the dirt road to the Corversbos again. In the canal along it, water plants and reflections of trees.

4 thoughts on “Witch-hazel flowers, birds and fungi in December”