Is The Netherlands’ tradition of putting Santa’s helpers in black-face racist or a harmless custom? We look at Zwarte Piet or Black Pete

This video is the new film Blackface; about the Dutch Saint Nicholas holiday, and the role of the blackface character Zwarte Piet (Black Pete) in it, as seen by an African American.

You know the story. Every December jolly St. Nicholas visits the children of the land — accompanied by his servant, Black Peter, a goofy, singing, candy-giving Renaissance-clad figure in blackface, giant red lips and a curly wig.

What? That doesn’t ring a bell?

It would if you lived in the Netherlands, where the visit of Sinterklaas and Zwarte Piet on December 5 — the eve of St. Nicholas’ birthday — is a longstanding tradition. But it’s a tradition that’s been called into question in recent years, including by Roger Ross Williams, the director of the short film “Blackface,” which looks into the character and his past.

“It was shocking to me. The arguments of the Dutch is that it’s a children’s holiday and that it’s a tradition,” says Williams, an African-American whose short film “Music by Prudence” won an Oscar for short subject in 2010. Many don’t see the racist aspects of the character, he adds.

When he announced his documentary, he was insulted online, told to “eat a banana, black monkey” and other epithets. He hasn’t been alone in raising hackles; his film shows one black protester being hauled away from a crowd welcoming Zwarte Piet because, in the protester’s words, “I made them feel so uncomfortable that they had to get the cops.”

The issue of racism is a complex one in the famously liberal Netherlands. (Indeed, its liberalism was a huge attraction for Williams, a gay man who is married to a white Dutchman and now lives in Amsterdam.) The country profited greatly from the slave trade in the 17th and 18th centuries; one of the roles of the Dutch West India Co. was to transport slaves from Africa to the Americas. The Dutch didn’t ban slavery in its territories until 1863, though it was illegal in the Netherlands.

Though the story of Zwarte Piet is said to date back hundreds of years, it was popularized in a 19th-century children’s book. The character is Sinterklaas’ Moorish helper, and his arrival from Spain with Sinterklaas — who rides a white horse — has become a yearly celebration, complete with Sinterklaas’ boat pulling into a Dutch harbor and a welcoming parade. Children and adults dress up as Zwarte Piet at parties.

“It’s just tradition. It has nothing to do with racism,” says Ronald Livius, a commodities trader who grew up in the southern Netherlands and now lives in Switzerland. A former Atlanta resident, he says that the Surinamese members of the Atlanta Holland Club who played Zwarte Piet had “absolutely no issue doing so.”

Williams, the filmmaker, dismisses this as “Dutch innocence.”

“They’ll say that Black Pete is not blackface, but you’re literally blacking up your face … and (adding) hoop earrings and an Afro wig,” he says. “It’s pretty obvious to us, but it’s like a whole country in denial.”

There has been some reconsideration of Zwarte Piet. There’s a Facebook page in opposition, and some fans have tried to recast his blackface as chimney soot.

Still, resistance has been strong. A U.N. committee asked the Netherlands to get rid of the character, but the Dutch government “dismissed” its request, The New York Times reported in August.

The right-wing party of Geert Wilders, one of the country’s most popular politicians, proposed a “Black Peter Law” last year that would ensure the character would remain as he is.

And when Emily Raboteau, an American who spent a holiday season in Amsterdam, tried to explain to locals why she had issues with Zwarte Piet, they ignored her.

“You’re being racist,” she said her Dutch neighbors told her. “We love him.”

“I was arguing with a wall,” she wrote in an essay for Virginia Quarterly Review.

For his part, Williams has been asked why he doesn’t focus on race problems in America. He says he has, but that’s not the point — he lives in the Netherlands now.

The US American documentary filmmaker Roger Williams received death threats since he announced he was making a documentary about Zwarte Piet. “I got an e-mail that I would get a bullet in my back and I had better watch out,” he told the RTL Late Night show.

It was the most violent of thousands of hate mails he received. In his documentary ‘Blackface’, broadcast by CNN, Williams takes a clear stand against Zwarte Piet as an outright racist phenomenon.

The attention he received since then was overwhelming. “I’ve hit a nerve, I believe.”

Williams, who lives in the Netherlands, says he does not understand how many Dutch people just do not see the problem. “People say to me that it is a harmless children’s festival, and then next they say that, being a black monkey, I should keep my mouth shut.”

In this weekend, and next weekend, there will be blackface parades throughout the Netherlands, but the national parade, the main one, was to be yesterday in a Dutch village called Dokkum. The Dutch government, national and local, not only subsidise this national blackface extravaganza, they also set the police in to prevent peaceful anti-racist demonstrators from protesting against this racist imagery promoted to children: here. 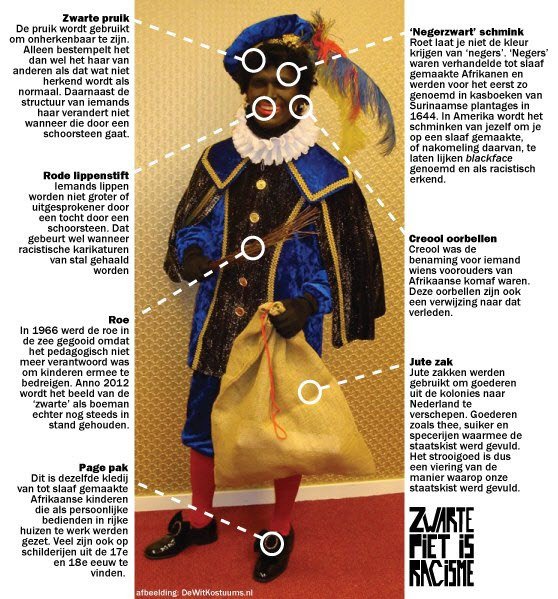 United Nations on racism and the Dutch government: here.