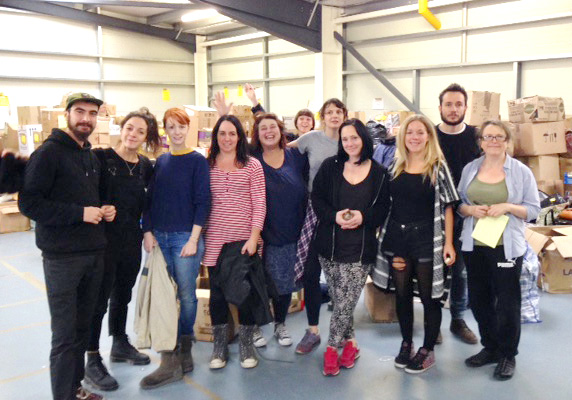 VOLUNTEERS from Calais Action yesterday loaded a truck to take aid for refugees to the Greek island of Samos.

Calais Action founder Libby Freeman told News Line before the truck arrived: ‘We have a lorry coming down to take 20 pallets to Samos. There are tents, toiletries, nappies and clothing for men, women and children. On Samos over half the refugees are children so we have a lot of baby and children’s stuff.

‘It has taken quite a lot of organising. I went to Samos for two days to see what was needed to be done. Another Facebook group had asked us to help so we said “YES”. I knew the situation in Greece was bad already. We went to Hungary and heard that Greece had got a lot worse. There were parts of the Greek Islands not covered by the media and there is no government help – neither the Greek nor Turkish governments.

‘There is Médecins Sans Frontières, they are there, and the Greek and Spanish Red Cross, but purely in a medical capacity. So there is no food aid and no clothing. Most of the refugees are wet and there is nothing to change them into. There are some clothes donated by the islanders but that is not much. We are the first people with aid really.

‘We will be supporting them as long as people send us money and aid and materials. Volunteers are going over to help distribute and cook food and to help look after the children. It is partly the UK government’s fault for starting these situations up in the first place. Millions of refugees are fleeing wars that the West has been involved with.

‘I am against the Tory government and any plans to bomb Syria. We started Calais Action because the UK government was doing nothing for refugees there. They are not even letting the aid agencies in.’