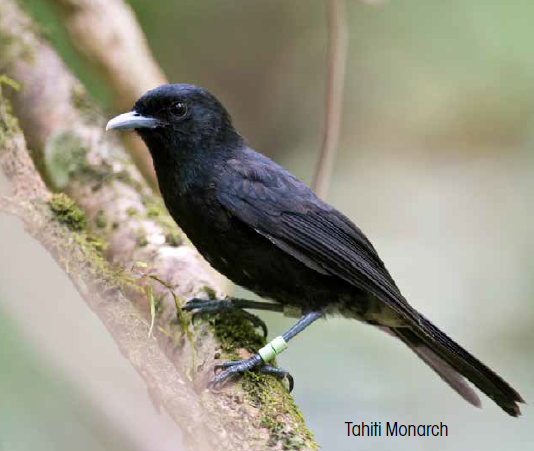 The decline of the Tahiti Monarch is being reversed by ongoing and intensive action by BirdLife French Polynesian partner Société d’Ornithologie de Polynésie (SOP MANU) and the local community. For the first time in many years the population has topped 50 birds with 17 pairs incubating 31 nests last summer and fledging 12 chicks. Small gains but with a species so close to extinction, this is a welcome outcome.

It is currently restricted to 4 lowland valleys where it is threatened by degradation of it habitat, black rats and the introduced Red-vented Bulbul and Common Myna which prey on eggs, chicks and compete for food and habitat. To add to their woes, Little Fire Ant is now spreading into the valleys.

Botanical pest Miconia calvescens, introduced in 1937, has replaced the high dense forest in one of its key habitats. This decline is likely to continue as the other forest habitat is largely composed of introduced invasive species, such as the African tulip tree Spathodea campanulata, and usually confined to a narrow strip along the floor of steep basalt canyons.

With all these threats the growing recognition by the local people of the icon status of Tahiti Monarch and their support for its conservation has been critical in reversing the population decline. They help to maintain 396 rat control stations and control and monitor mynas and bulbuls. More than 280 volunteers/day and 15 landowners/day went to remove Miconia, Triplaris and other invasive introduced plants during 27 one day fieldtrips in one year. Volunteers, land owners and children at the local school have grown 529 seedlings of ‘useful’ trees and shrubs for Tahiti Monarch.

It is a battle maintaining ongoing controls to stop the impact of invasive species. It can be done and in New Zealand the BirdLife Partner controls predators throughout the almost 3000ha Ark in the (Waitakere) Park near Auckland allowing long gone species like Kokako to be reintroduced. And as part of the vision of having a predator free New Zealand, some exciting new control methods are being developed. The concept of `mainland sanctuaries’ is now a reality. It is the way to bring endangered species off the islands back to their original homes where they can once again become part of the dawn chorus. But getting funds for ongoing habitat protection projects in the Pacific is much more difficult even with community support.

The best longer term chance to save the Tahiti Monarch is to establish a second population on another island without the same level of threats, especially black rat. Rimatara Island, home of the Rimatara Lorikeet, has been considered based on the absence of Black Rat, Common Myna, Red-vented Bulbul and Swamp Harrier, and the availability of suitable nesting habitat. But a growing human population on the island and the loss of forest, as well as the potential to spread disease, has meant that proposal is being reviewed and other islands being considered. BirdLife is currently seeking funds to allow SOP Manu to complete a study to identify the best option and plan for the transfer.

It’s ambitious. That is why we need sponsors to help us ensure this beautiful bird is not lost. If you can help please make a donation or get in touch.

French Ministry of Education awards school children for their contribution to saving the Tahiti Monarch: here.

A tale with a message – search for lost Tahiti Monarch chicks after a vicious storm: here.

When its recovery program started in 1998, conservationists were only able to locate 12 Tahiti Monarch Pomarea nigra individuals. We already know that invasive species are a huge problem for island birds, but on its home island of Tahiti, the Monarch was cursed with not one, but nine invasive menaces, all ranked among the 100 most invasive species on the planet. Against such staggering odds, some conservationists might have declared the beleaguered passerine a lost cause: with the population so low, and the predators so unmanageable, they might have argued that the cost of saving it was too high: here.