.
This blog reported today about 14-year-old Texas boy Ahmed Mohamed, arrested as a ‘terrorist’ for inventing a clock. There is quite some xenophobia and bigotry in Texas.

Ahmed Mohamed told that he was now so scared that he would not dare to bring other inventions to school.

Then, by United States President Obama, on Twitter today:

Cool clock, Ahmed. Want to bring it to the White House? We should inspire more kids like you to like science. It’s what makes America great. 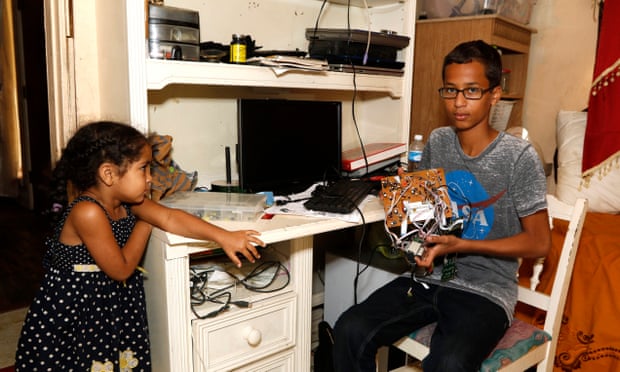 One should hope this invitation of one person will have a positive effect for others, falsely and hysterically accused of ‘terrorism’ … from this six-year old girl to that famous Egyptologist to so many people.

“I have lost my innocence. I can never look at the world in the same way,” the teenager – currently suspended from school – told The Independent.

The 14-year-old said he had assembled the clock from a piece of circuit board and other things he had found in father’s garage. It had taken him just 10 or 15 minutes.

Ahmed Mohamed is just one example of the bigotry American Muslims face, by Linda Sarsour. Children like the now-famous clock-maker are this country’s future. We can’t allow them to be irreparably damaged by Islamophobia: here.

OUTPOURING OF SUPPORT FOR MUSLIM BOY WHO BROUGHT CLOCK TO SCHOOL Ahmed Mohamed brought a homemade clock to school to impress his teacher, but ended up in the principal’s office because school officials assumed it was a bomb. After Mohamed was handcuffed and interrogated, social media sprung to his defense. As of today, he has an invite to the White House and assurance from MIT that he’s the kind of student they like to see. [Andy Campbell, HuffPost]