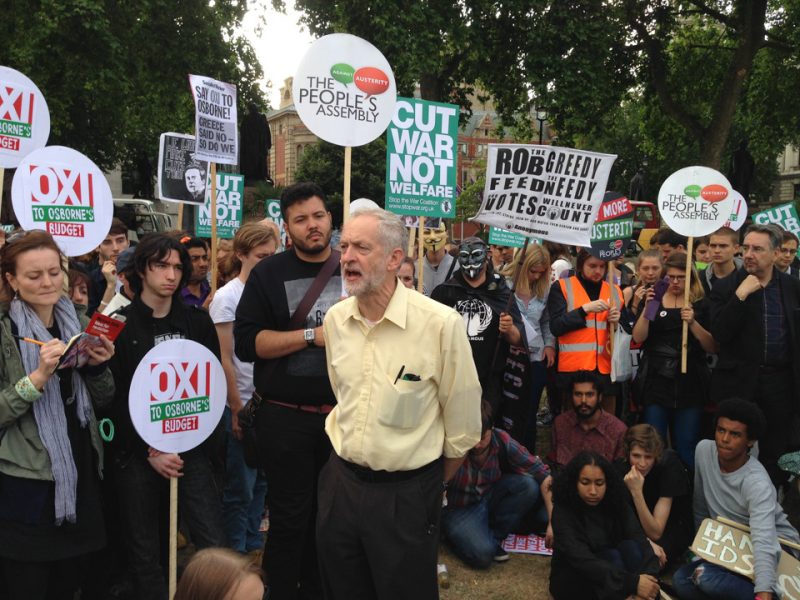 By Jeremy Corbyn in Britain:

Thank you all for making this happen

THANK YOU to the Morning Star and its readers for the most incredible support throughout this leadership campaign — and for the detailed coverage of the policy proposals that we have made and the debate that these have encouraged.

The campaign began in the aftermath of the Labour election defeat in May, when the party opted for the election of a new leader, rather than an extended policy debate.

After much discussion, supporters of the Socialist Campaign Group in Parliament decided that we should attempt to put up a candidate for leader, and I was duly nominated.

Eleven MPs initially nominated me. This grew as MPs didn’t want to stand in the way of a democratic process in the party (despite not agreeing with my policies) and we saw huge activity by party members and supporters via social media to encourage MPs to do just that.

The fundamental political issue of the campaign has been opposition to the politics and economics of austerity. Essentially, the austerity process claims that the 2008 banking crisis was a product of too much government spending and that the deficit came about because of this, and not because of the profligacy of the banks or the government bailout.

This meant that the incoming Tory-Lib Dem coalition in 2010 immediately embarked on a process that brought about £21 billion of cuts in welfare spending alone, and an enormous cut in almost every local authority’s budget, as well as wage freezes, and, notably in the private sector, an enormous growth of zero-hours contracts.

Our campaign challenged the notion that the issue of the debt can be dealt with by punishing the poorest. Austerity was essentially a political agenda to roll back the state and individualise public services, rather than ensure their continued collective delivery.

The international issues that Britain faces are huge, and from the very beginning our campaign has reiterated my opposition to the Iraq war, and to future bombing campaigns, but has also called for the Labour Party to oppose the replacement of the Trident nuclear missile system and instead establish a defence diversification agency to ensure those jobs and skills are not lost, but working on products that improve all our lives.

The Tory Health and Social Care Act is designed to destroy the NHS and make it a service of last resort, instead of providing a universal service. The Tory Welfare Reform Bill hits hardest at the poorest and most vulnerable in our society.

We as a labour movement have to be strong enough to stand up and ensure that we have a system that prevents anyone falling into destitution, supports those going through mental health crises and ends the internal market and privatisation of our health service.

Our campaign watchword has been resolutely engaging people in democratic politics, producing 13 different policy suggestions, and absolutely refusing to engage in personal sniping or abuse of any sort.

We’ve been on the receiving end of an almost unprecedented three months of abuse by some media outlets, but have absolutely refused to engage or with or respond to that in order to ensure that the political message is not lost.

I have taken part in 99 different events, ranging from hustings organised by the Labour Party and other groups to events organised by media outlets.

We’ve also organised public rallies in all of the major towns and cities of Britain and I’ve been privileged to be invited to speak at some of the most significant labour movement festivals that are held throughout the country.

The very first hustings was organised by the BBC Newsnight in Nuneaton, a town that Labour failed to win back. We had lost support there to Ukip and the Tories.

The hustings showed that when the Tories were politically challenged on austerity, there is an audience ready to listen.

To emphasise that point, last Tuesday we organised another rally in Nuneaton which was attended by over 500 people.

The annual Tolpuddle weekend in Dorset — to commemorate the bravery of farm labourers standing up for union rights in the 19th century — was a huge affair.

At the end of the festival we held our own event and over 3,000 people stayed to listen to a message of hope rather than despair.

Probably the biggest audience of the whole campaign was the Durham Miners’ Gala, which was redolent of all the history of the miners’ struggle in Durham, but also highly relevant to today’s society.

The festival has grown year on year as the relevance of socialists and an inclusive message becomes clearer and stronger.

We held meetings in many cities, including an enormous Friday evening event in Glasgow when more than 2,000 people packed into the Old Fruit Market, concluding the event with the whole audience joining in the singing of Bandiera Rossa.

Camden Town Hall was so full that overflow meetings were held both inside the council chamber, another committee room and out on the street where I stood atop an FBU fire engine to address the crowd.

One of the most poignant rallies was in Tredegar, the home of Aneurin Bevan. We had an NHS rally in the middle of the afternoon with hundreds of people gathering around his memorial stones rededicating themselves to healthcare as a human right and not a privilege.

Leeds Armouries was home to our rally, with over 2,000 people from all walks of life and all over Yorkshire who came to show their support for an alternative.

The 99th event was held on Thursday night in my own constituency in Islington in the biggest church we could find. Over 1,000 people crammed in to hear from Unite general secretary Len McCluskey, my great friend and colleague John McDonnell and newly elected MPs Kate Osamor, Clive Lewis, Richard Burgon, Cat Smith and Rebecca Long-Bailey.

Touching speeches were made by a number of others, including Neil Findlay MSP and longstanding Islington members and supporters including Jan Whelan, George Durack and others. Both Jan and George nominated me when I first stood for selection in 1982.

It has been an amazing experience and campaign, uniting young and old and alike, all cultures and faiths, on the basis of optimism and belief that we can organise society differently and better.

We don’t have to accept austerity and even deeper inequality in our society, but we can reach out and unite people on a progressive agenda.

I’m looking forward to all the challenges ahead, however, what can never be taken away is that this has been a summer that changed politics in Britain, and enormous thanks are due to those who have organised our campaign in every part of Britain.

The 16,000 people who signed up as volunteers will never be forgotten. It all started just 100 days ago.

• Jeremy Corbyn is Labour MP for Islington North and leader of the Labour Party.

JEREMY CORBYN’S triumph is cause for celebration for everyone who fights for a better world. His victory was utterly overwhelming, with more than three times as many votes as runner-up Andy Burnham. And he topped the poll in every category — among registered supporters, affiliated supporters from the trade unions and full party members: here.

This article by Dutch Socialist Party MEP Dennis de Jong hopes that, now that Corbyn has been elected, there will be a much needed shift to the left among British labour and other social democrat MEPs as well.

18 thoughts on “New British Labour leader Corbyn thanks his supporters”