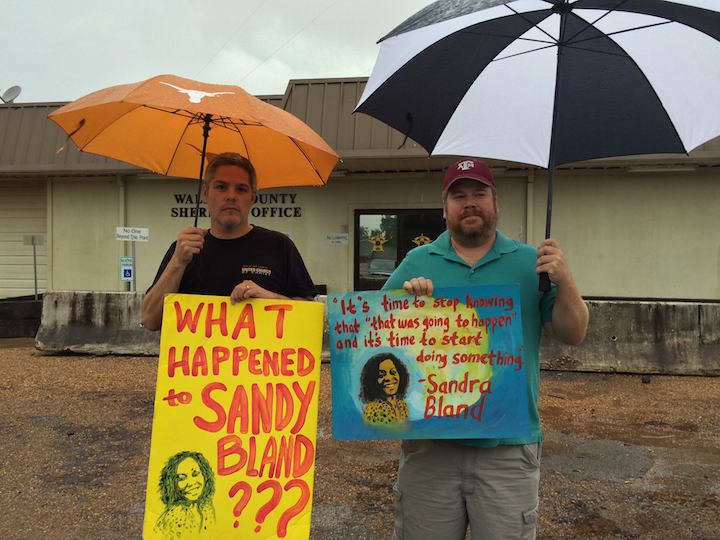 From the United Church of Christ in the USA:

A trio of United Church of Christ ministers in Texas carried banners for justice, joining residents of Waller County in a public demonstration calling for justness in the death of Sandra Bland, a black woman who died while in police custody in July in that county’s jail near Houston.

What they discovered was the StillSpeaking God in an unexpected place, as march participants chanted “Sandy still speaks”. The Rev. Lynette Ross and the Rev. Ginny Brown Daniel say they were “struck by that phrase to the similarity of our own mantra in the United Church of Christ that ‘God is Still Speaking.'”

“Indeed God was still speaking as we marched to the town hall,” Brown Daniel said. 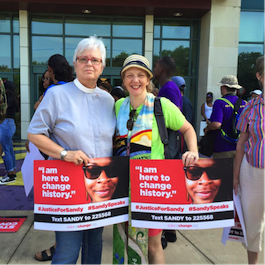 On Aug. 20, the Rev. Dan De Leon, pastor of Friends Congregational Church UCC, in College Station, went to the jail where Bland died and to the site of her arrest. Five days later, Aug. 25, Ross, pastor of Cathedral of Hope-Houston, and Brown Daniel, a UCC minister and president of Divine Sparks, Consulting, marched in the Solidarity with Sandy Walk to protest Bland’s death. The walk began at Bland’s alma mater, Prairie View A&M University, and ended at the Prairie View Town Hall, where the City Council voted to change the name of the road where Bland was arrested from University Drive to the Sandra Bland Parkway.

The circumstances of Bland’s death have been disputed. She was pulled over on July 10 for a minor traffic violation, and was arrested after the interaction between her and a state trooper became heated. Three days later, police found her dead in her jail cell. Believing she had hanged herself, the county coroner ruled her death a suicide. Bland’s family doesn’t believe that version of events, and is awaiting the results of an independent autopsy.

Prayer vigils have been held at the Waller County jail since Bland’s death, and a district attorney said that her death is being investigated as a murder.

“Sandra’s prophetic voice was disarming, and it needs to be, De Leon said. “There was a print that read, ‘Always be loving,’ placed right next to a poster with the words, ‘May you have no peace until justice is served.’ For me, this resembles the paradox of the cross of Christ—a visible intersection of love and justice. Sandra’s memorial reminds us that we need to keep going to those places where love and justice meet if we truly desire to see God’s transformative power topple racism and the racist systems that still plague not just Waller County, but our very hearts and minds.

Ross and Brown Daniel said that local residents told them that before Bland’s death many African-American men and women in Waller County had been unfairly pulled over by the police and subsequently arrested. “The only difference this time is that it was recorded and has made the national news because of her death, they said.

“It was as if the spirits of those who have endured oppressive and violent racism in Waller County, Texas, surrounded us as stories were shared about political injustice and voter rights denial, Brown Daniel said.

The Waller County sheriff, who has called protesters members of the “church of Satan,” ordered the tree where protesters gathered for shade to be cut down, according to Bland supporters, preventing protesters any reprieve from the summer heat.

Ross said, “Christ’s mandate to all of us is that we are called to walk shoulder-to-shoulder together as brothers and sisters, speaking truth to power, liberating the oppressed, caring for the poor, comforting the afflicted, and afflicting the comfortable. We are the United Church of Christ!”

Although the ministers weren’t aware of the county’s history, they vowed to preach, march, and advocate with the residents of Prairie View. One of those people they met, a woman named Karisha, told them that Bland’s life is stirring up her own faith again and fueling her passion for justice and opening her heart to humanity.

“This is the people that God has called us to be as the South Central Conference of the United Church of Christ—a Church that will unapologetically go to those places where love and justice meet, no matter how uncomfortable those places might be, until oppression gives way to equality, Brown Daniel said. “God is still speaking.”

10 thoughts on “Texas Christians march for justice for Sandra Bland”