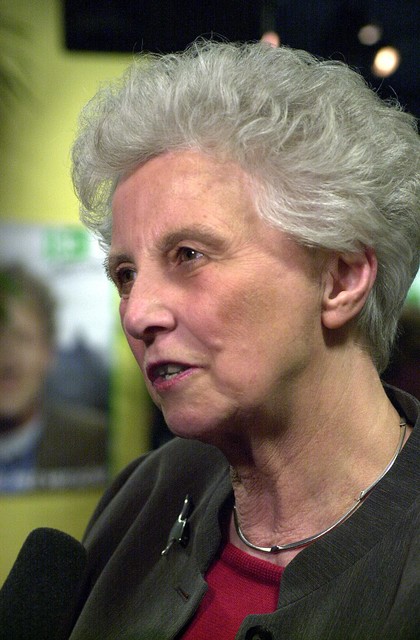 This photo shows Ms Els Borst-Eilers. She was a doctor. And a politician of the ‘liberal’ D66 party. She was D66 party leader; and deputy prime minister. And Minister of Health. As a minister, she liberalized the rules on abortion and euthanasia. The political Christian right did not like her for that. According to the ultra-religious political party SGP, apart from her policies, Els Borst should not have been a minister in the first place; as their platform said women should not have the vote. That platform also says that the death penalty, abolished in the Netherlands in the nineteenth century, should be brought back.

On 8 February 2014, Ms Borst was murdered. It took police almost a year to arrest the suspect of this murder.

The suspect of the murder of Ms Borst is Bart van U.

Also Van U. – from a fundamentalist Christian family – and Loïs thought differently about euthanasia and abortion, he said.

According to fanatical fundamentalist Christians, ‘abortion is murder’.

Someone who knew Bart van U. said, quoted in Dutch daily Metro, 26 January 2015:

He saw Muslim extremists everywhere, and also said that abortion is murder.

Some fanatical religious people extrapolate that to giving oneself the right to murder people with pro-choice views. Like violent ultra-religious Christians in the USA murdering doctors. And, apparently, Bart van U. in the Netherlands murdering someone with different views on women’s reproductive rights. Even if that person with different views is one’s own sister.

One may ask: if a person like Bart van U. hated his own sister so much for her different views on women’s reproductive rights, then how much stronger must his hatred have been for Ms Borst? Not his sister. Not just someone with views; but someone who put her views into practice by liberalizing the laws of the land about abortion and euthanasia.

That ultra-fundamentalist Christian ‘abortion is murder’ ideology may have been Van U.’s murder motive was only mentioned very shortly, or not at all, by Dutch and international media reports on this.

Former D66 minister Els Borst was killed by stab wounds. The public prosecutor has announced this, now that the summons has been sent to the suspect, Bart [van] U.

Van U. will be next Tuesday for the first time in the court room in this case. However, he had to justify himself earlier for the murder of his sister. In court he admitted that he had stabbed his sister. About the murder of Ms Borst, as far as is known, nothing was said.

Borst was murdered in February last year in the garage at her home in Bilthoven. Almost a year later, in January, Van U. murdered his sister. Only during the investigation into that murder, police started to suspect him of the violent death of the former minister.

Now, to another side of self-confessed murderer Bart van U. Apparently, this Islamophobe ‘saw Muslim extremists everywhere‘. Unfortunately, Bart van U. is not the only person with that kind of fanaticism, neither in the Netherlands nor in other countries.

Then, not just one sentence in media, as now about Bart van U.’s possible motive. Chocolate letter headlines on newspapers’ front pages about “International Islamic terrorism at it again“. Supporters of Geert Wilders‘ xenophobic PVV party setting mosques which have nothing to do with Mohamed U. on fire. Dutch politicians afraid of losing voters to the PVV attacking civil liberties, of Muslims and of other people as well.

Fortunately, as far as I know no one in the Netherlands so far has blamed Christians who have nothing to do with Bart van U. and his crimes. I hope it will stay that way. And that people will learn lessons from that about the stupidity of Islamophobia, anti-Semitism, homophobia, anti-Roma racism, anti-African racism, anti-east European bigotry, etc. etc.

UPDATe: Van U. tried to escape from prison.