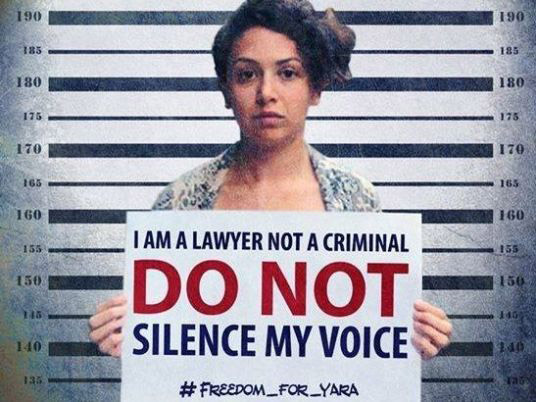 CAIRO witnessed its biggest protests in months this week, when employees from the tax and customs authorities gathered in front of the Press Syndicate in downtown Cairo to protest against the application of the new civil service law.

This law, number 18 of 2015, came into effect in July 2015. Its application is expected to be set out within the coming few days, with five million government employees subject to it. Employees at the tax and customs authorities have complained that they will be harmed by the law, which deprives them of the special bonuses they receive according to the authorities’ revenues.

The civil service law was prepared by the government and approved by Egypt’s military ruler President Abdel-Fattah Al-Sisi in March 2015. It replaces law number 47 of 1978 and aims to reform Egypt’s administrative apparatus, tackling issues of hiring and wages in government institutions.

Some articles of the law have been controversial since the government has said they will curb bureaucratic inefficiency but employees believe they will slash their salaries and make it easier for the government to fire them. Last month, the Syndicate for Tax Authority Employees submitted a memo to the cabinet requesting that they be excluded from the law but without receiving a response.

The employees feel that the government has disregarded their opinion, and they have escalated the situation by gathering to express their refusal of the law and demand its annulment. In response, the cabinet held a meeting on Monday to discuss the new law, later issuing a statement that said the law would be applied to all authorities subject to civil service law 47 of 1978.

The cabinet statement explained that doctors, teachers and employees at the Transportation Authority were excluded from the law because they were not subject to the earlier one. Ashraf Al-Arabi, the minister of planning, said the government was not considering changes to the law and that the presidency and cabinet were the only authorities that would be excluded, being ‘special cases’.

If the assessment is still weak after three years, a percentage can be deducted from his salary, according to the statement. Law 47 permits promotion every six to eight years, but the new law allows an employee to be promoted every three years. Basic salaries under the new law will constitute 80 per cent of overall wages in all government institutions, as opposed to the older unit-by-unit system, while bonuses, traditionally dependent on seniority, will be calculated on performance.

• A campaign is seeking to collect signatures from lawyers worldwide in a petition to the United Nations Secretary General, demanding pressure for the release of an Egyptian activist lawyer jailed for protesting against laws regulating the right to demonstration. Change.org, in a statement it said was made by attorneys from around the world, is demanding the release of activist and lawyer Yara Sallam and 23 others who were convicted of breaking protest laws during a demonstration outside the Ettehadiya Presidential Palace in June 2014.

Sallam, 29, was sentenced along with 22 others to three years in October 2014, which was later reduced to two years. The campaign added that the accusations against the activists were ‘baseless’ and that the defendants had exercised their ‘legitimate right to demonstrate’.

‘The outcome of the court’s decision affects not only Yara Sallam and other Egyptian human rights defenders, but it also impacts the promotion and protection of human rights in Egypt on a wider-scale,’ said the organisation. The petition urged the Egyptian government to release the activists, the UN not to support the current government and the international community to cease its military and development aid to Cairo.

Meanwhile, the government has introduced a draft new labour law aiming to shake up the country’s existing legislation. Two weeks ago, the Ministry of Manpower and Immigration finished a draft of the new law and sent it out for consultation to business and labour representatives. The new draft law will replace the current law, number 12 of 2003.

Since 2011 the government has introduced a number of drafts of a new unified labour law, but they have not gained the approval of employers or employees in Egypt, who have had different views about what is needed. The new law comprises 270 articles that address all aspects of the Egyptian labour market.

Among the most important is the right of the employer to terminate an employee’s contract and the conditions under which this can happen under the new law. In its fifth section, the law also deals with safety procedures at work, saying that companies are obliged to institute emergency procedures in case of fire or other hazards.

Employees are granted the right to carry out peaceful strikes in conformity with the law’s conditions and procedures. Employers and employees have reacted differently to the new draft law. Business associations have reservations on some articles, and labour representatives are divided into two groups.

Members of the syndicates affiliated to the Federation of Egyptian Trade Unions have welcomed the draft. But labour activists and representatives of the independent unions are against it since they believe that the law does not meet workers’ aspirations. Khaled Al-Fiqi, chairman of the Engineering Industries Syndicate, said the law was positive in its provisions concerning the employment of women and children.

It prohibits children working under the age of 15, setting the maximum hours at six per day. The law also includes articles protecting the rights of people with special needs, he said. However, Faisal Lakosh, a labour activist at the Al-Mahalla Al-Kobra Spinning and Weaving Company, said the government was ignoring the opinion of labour activists who opposed any dilution of workers’ rights.

Lakosh said: ‘The government claims that it has engaged in social dialogue and held meetings with workers, but this has not happened. ‘We have not been invited, and we did not even see the draft law before it was issued. The government only met with state-backed trade union representatives who usually approve any draft presented by the Ministry of Manpower.’

Lakosh said that the draft had some good articles regarding retirement, but it still restricted workers’ flexibility. ‘We need to have extra hours to meet our families’ needs and improve our standard of living,’ he said.

Wael Habib, deputy chairman of the Spinning and Weaving Syndicate, said the government had prepared the draft law without participation from civil society. ‘The Ministry of Manpower invited trade union members who agree with the government to consult on the law, knowing that they want to keep their positions at the federation regardless of the law’s negative articles,’ he said.

One of the issues that have stirred debate in the draft law is the minimum wage. Private-sector workers have long demanded inclusion in the minimum wage system, which the government adopted in 2014 and is currently applied only to public-sector employees. Bosses are resisting this and demanding wages based on productivity.

Cairo citizens caught between Isis violence and Abdel Fatah al-Sisi’s draconian security crackdowns. With journalists and activists jailed and a new terrorism law in effect, a culture of fear is growing in Egypt: here.

In a blatant attempt to terrorize the media and the population of Egypt, the US-backed junta of General Abdel Fattah al-Sisi sentenced Al Jazeera journalists to three-year jail terms on trumped-up charges of aiding deposed President Mohamed Mursi’s Muslim Brotherhood (MB). Sisi toppled Mursi in a bloody July 2013 coup, shooting thousands of unarmed people in the streets of Egypt: here.