This video from the USA says about herself:

Kimberle’ Crenshaw, law professor and co-founder of the African American Policy Forum, discusses the death of Sandra Bland in the context of her report, “Black Girls Matter: Pushed-Out, Overpoliced and Underprotected”.

See transcript of this here.

From Associated Press in the USA:

The House Committee on County Affairs called for a hearing Thursday to get answers surrounding the arrest and death of Sandra Bland.

“It broke my heart to hear (about) Sandra Bland,” said Janet Baker.

Janet Baker testified and said she feels a strong connection to the case because a Houston police officer killed her son Jordan Baker last January.

“To hear her mom say that they took a road trip together and I just remember the last phone call that I had with Jordan and I replay it over and over again. I didn’t know it would be the last conversation we’d have,” said Janet Baker.

A grand jury cleared the officer in Jordan Baker’s case.

Janet Baker was one of several community members who spoke in front of the committee asking for change in our law enforcement and in our jail system.

“We know from her case, if you can make changes that would impact other people, where you won’t have something like this happen again no matter what it was, that’s a plus,” said Yannis Banks with NAACP Texas.

DPS Director Steve McCraw said his department will do a thorough investigation and agreed the trooper who arrested Bland violated policy.

“He clearly was rude and he had an opportunity to deescalate it, instead he escalated it,” said McCraw.

“Counties need to be doing better and the state as a whole can possibly review to see if they can step up in certain areas such as additional funding for mental health,” said Wood.

As for Baker, she wanted officers to be held accountable for their actions. She’s hopeful something will be done.

“My faith tells me that yes there will be a change, there has to be,” said Baker.

Officials recommended revising the mental health assessment in jails and adding training for jailers to detect someone in crisis.

Committee members invited officials from Waller County, but none could make it to the hearing.

Bland was found dead in a Waller County jail July 13th, three days after she was arrested during a traffic stop. Authorities say she hanged herself, a finding her family has questioned.

Sandra Bland’s Only Crime: She Knew Her Rights: here. 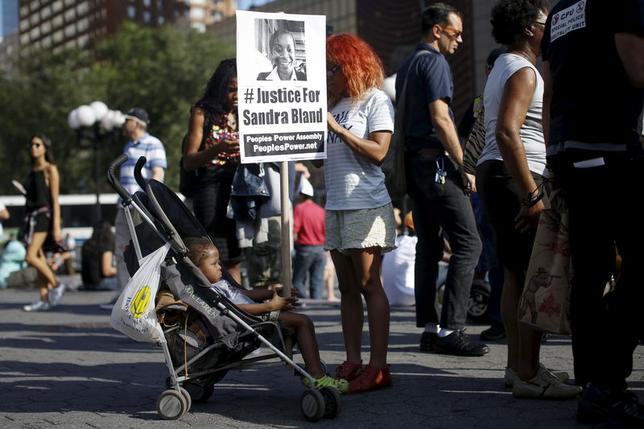 AUSTIN, Texas – The Texas trooper who arrested a black Chicago-area area woman after a confrontation that began with a traffic stop had been cautioned about “unprofessional conduct” in a 2014 incident while he was still a probationary trooper. The disciplinary entry regarding Trooper Brian Encinia of the Texas Department of Public Safety was contained in Encinia’s personnel file. The department released the file Friday in response to Freedom on Information requests: here. And here.

A total of six African-American women have been found dead in police custody in just the last month. Most of the deceased women had been in jail for no more than two days and held for minor charges. Their deaths are all under investigation. The six women are: Sandra Bland of Texas, Kindra Chapman of Alabama, Joyce Curnell of South Carolina, Ralkina Jones of Ohio, Alexis McGovern of Missouri, and Raynetta Turner of New York: here.

Here are the five black women who have died in US jails in July: here.

No mourning, no peace: Sam DuBose, Sandra Bland and why Black lives don’t matter (yet): here.

How the lack of police ‘discretion’ killed Samuel Dubose and Sandra Bland: here.

Sandra Bland, Samuel DuBose and the rise of ‘vehicular stop and frisk’. Racially based stops for minor traffic violations on the rise because of court action and police practice, say activists: here.

Looking Back on Cincinnati’s Long History of Police Brutality. April Martin spent nearly 10 years reporting on the 15 African Americans killed by police between 1995 and 2001 for her new documentary, Cincinnati Goddamn. Then another killing happened: here.

This morning, a coalition of activists gathered in front of the Justice Department in Washington DC to deliver a petition containing 500,000 signatures demanding that Attorney General Loretta Lynch launch an investigation into Bland’s death. Last week, Senator Richard Durbin (D-Ill.) wrote to Lynch asking that she open an investigation; Bland was from Illinois: here.

BEHIND THE PROLIFERATION OF RENT-A-COPS “In the United States, private police officers currently outnumber their publicly funded counterparts by a ratio of roughly three to one. Whereas in past decades the distinction was often clear — the rent-a-cop vs. the real cop — today the boundary between the two has become ‘messy and complex,’ according to a study last year by Harvard’s Kennedy School of Government.” [NYT]

4 thoughts on “Sandra Bland, after her death in Texas, USA, update”