This video from Ohio in the USA says about itself:

The family of Samuel Dubose rallied outside Cincinnati City Hall, demanding transparency after he was shot and killed by University of Cincinnati Police Officer Ray Tensing.

From Vox.com in the USA:

A Cincinnati traffic stop over a missing front license plate turned deadly on July 19 when a campus police officer shot an unarmed black man in the head.

University of Cincinnati (UC) police officer Ray Tensing, who is white, fatally shot Samuel Dubose, a 43-year-old black man, after a brief struggle during the traffic stop. The shooting has once again highlighted racial disparities in police use of force — an issue that’s become a matter of national protests and debates since the police shooting of unarmed 18-year-old Michael Brown in Ferguson, Missouri, last August.

Dubose was stopped for missing a front license plate

Tensing, who has five years of experience in law enforcement, stopped Dubose around 6:30 pm when he noticed Dubose’s car didn’t have a front license plate. Tensing asked for a driver’s license, but Dubose handed him a bottle of alcohol, police said at a news conference. Tensing then asked Dubose to step out of the vehicle, at which point a struggle ensued at the door of the car.

The vehicle began moving forward, and Tensing was knocked to the ground, NBC News’s M. Alex Johnson reported. He fired a single shot at Dubose, hitting him in the head and killing him. The car rolled for about a block before it crashed, police said, according to CNN’s Ralph Ellis, Don Melvin, and David Shortell.

Tensing was reportedly wearing a body camera. But police won’t release footage from the device until the investigation is complete.

Mayor John Cranley said at a news conference that the city’s police department will work with UC to update and improve training and policies on use of force. “As a general matter, a pullover related to a license plate should not in a normal course of events lead to lethal force … as it has in this case,” he said.

UC has an agreement with the Cincinnati Police Department to help patrol areas around the campus.

The university police department’s use of force procedure states that campus officers “should not discharge a firearm at or from a moving vehicle except as the ultimate measure of self-defense or defense of another when the suspect is using deadly force,” according to CNN.

City police and Hamilton County prosecutor Joe Deters are investigating the shooting. Tensing is on administrative leave with pay while the investigation continues. 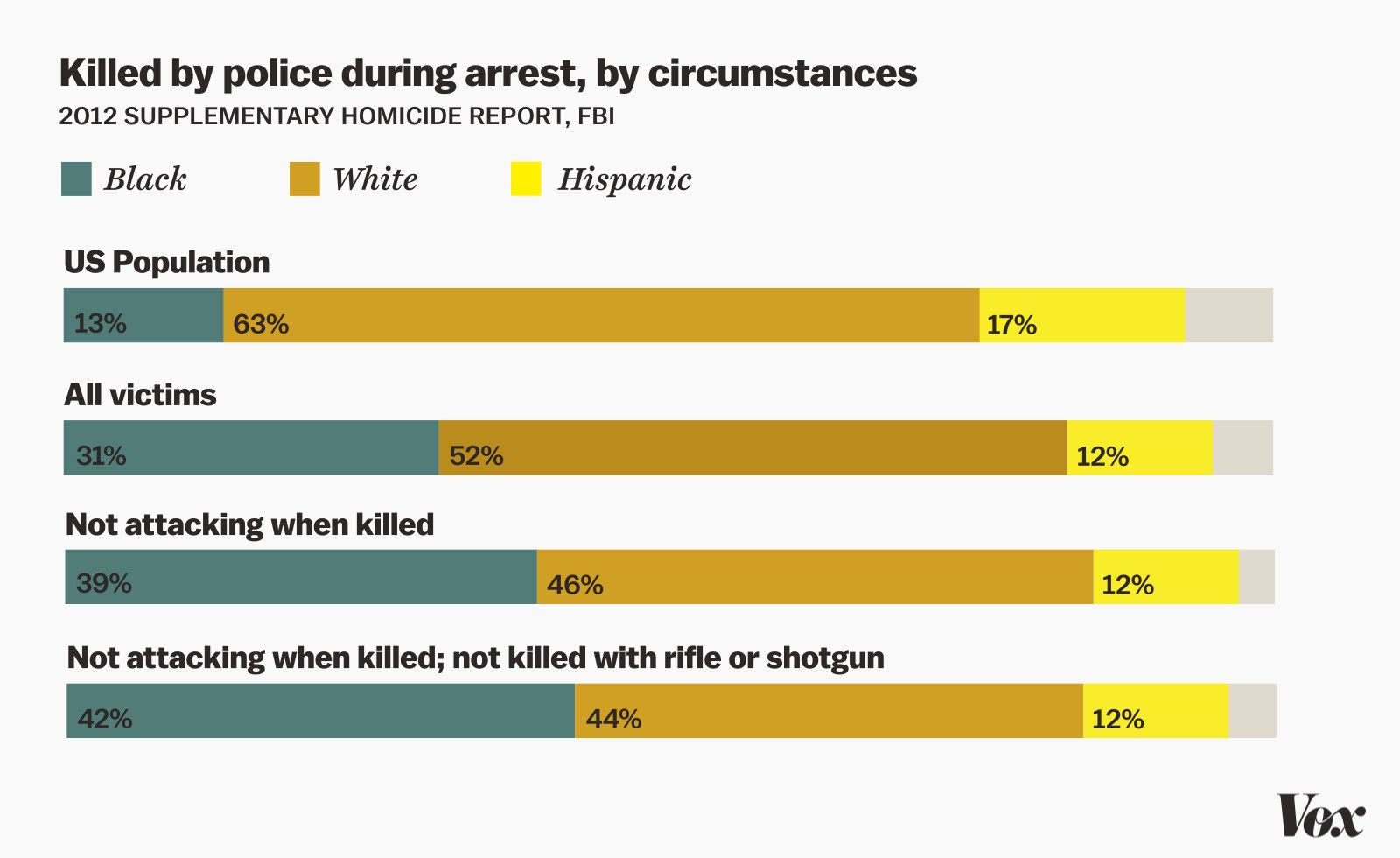 An analysis of the available FBI data by Vox’s Dara Lind shows that US police kill black people at disproportionate rates: They accounted for 31 percent of police shooting victims in 2012, even though they made up just 13 percent of the US population. Although the data is incomplete, since it’s based on voluntary reports from police agencies around the country, it highlights the vast disparities in how police use force.

Black teens were 21 times as likely as white teens to be shot and killed by police between 2010 and 2012, according to a ProPublica analysis of the FBI data. ProPublica reported: “One way of appreciating that stark disparity, ProPublica’s analysis shows, is to calculate how many more whites over those three years would have had to have been killed for them to have been at equal risk. The number is jarring — 185, more than one per week.”

Subconscious racial biases, known as implicit biases, may explain the disparities. Studies show, for example, that officers are quicker to shoot black suspects in video game simulations. Josh Correll, a University of Colorado Boulder psychology professor who conducted the research, said it’s possible the bias could lead to even more skewed outcomes in the field. “In the very situation in which [officers] most need their training,” he said, “we have some reason to believe that their training will be most likely to fail them.”

This November 2014 video from the USA is called Why it’s so rare for police to be prosecuted for killing civilians.

Cops can legally shoot when they reasonably perceive a threat

Police only need to reasonably perceive a threat to legally fire — and the threat doesn’t have to be actually present.

Constitutionally, “police officers are allowed to shoot under two circumstances,” David Klinger, a University of Missouri St. Louis professor who studies law enforcement officers’ use of force, said in August. The first circumstance is “to protect their life or the life of another innocent party” — referred to as the “defense of life” standard by police departments. The second circumstance is to prevent a suspect from escaping, but only if the officer has probable cause to think the suspect poses a dangerous threat to others.

The logic behind the second circumstance, Klinger explained, comes from Tennessee v. Garner. That case involved a pair of police officers who shot a 15-year-old boy as he fled from a burglary. (He’d stolen $10 and a purse from a house.) The court ruled that cops couldn’t shoot every felon who tried to escape. But, as Klinger said, “They basically say that the job of a cop is to protect people from violence, and if you’ve got a violent person who’s fleeing, you can shoot them to stop their flight.”

The key to both of the legal standards — defense of life and stopping a fleeing violent felon — is that it doesn’t matter whether there is an actual threat when force is used. Instead, what matters is the officer’s “objectively reasonable” belief that there is a threat.

That standard comes from the other Supreme Court case that guides use-of-force decisions: Graham v. Connor. This was a civil lawsuit brought by a man who survived his encounter with police officers but was treated roughly, had his face shoved into the hood of a car, and broke his foot — all while suffering a diabetic attack. The court didn’t rule on whether the officers’ actions had been justified, but said police couldn’t justify their conduct solely based on whether their intentions were good. They had to demonstrate that their actions were “objectively reasonable,” given the circumstances and compared with what other police officers might do.

What’s “objectively reasonable” changes as the circumstances change. “One can’t just say, ‘Because I could use deadly force 10 seconds ago, that means I can use deadly force again now,'” Walter Katz, a California attorney who specializes in oversight of law enforcement agencies, said in August.

In general, officers are given a lot of legal room to use force without fear of punishment. The intention behind these legal standards is to give police officers leeway to make split-second decisions to protect themselves and bystanders. And although critics argue that these legal standards give law enforcement a license to kill innocent or unarmed people, police officers say they are essential to their safety.

This October 2014 video from the USA says about itself:

Why recording the police is so important

Dashcams and bodycams are intended to prevent police brutality. But do they help when police control the footage?