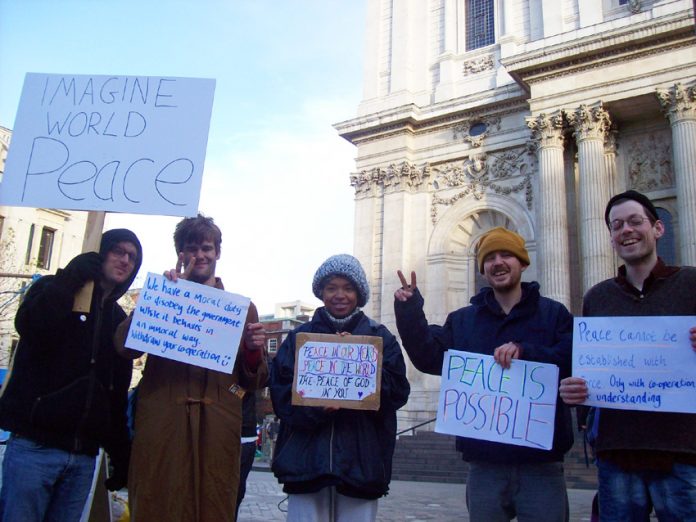 ‘WE WILL NOT BE EVICTED!’ – insist St Paul’s occupiers

‘We will not be evicted!’ was the clear message from the occupiers outside St Paul’s as they defy new attempts by the Corporation of the City of London to evict them.

‘Nothing can stop this movement from growing, in almost every country in the world there is an Occupy Movement of young and old people who refuse to pay the price for capitalism with their jobs and health care and lives.

‘In the US the Occupy Movement has defied attempts to brutalise, gas, attack and destroy the occupied areas.

‘The same is true for our occupation, with every threat, with every attack, with every day our resolve to stay grows and we become stronger in the belief in our own strength.’

Another occupier, who travelled all the way from Ireland to participate in the occupation, Conor said: ‘The church has made us an offer where they will put up a tent in St Paul’s Cathedral and some can stay there but the rest of us would have to leave.

‘This insulting and pathetic offer is a liberal front to try and give the church a democratic and popular face.

‘Meanwhile, the Corporation of London have made further threats and they have re-opened the eviction proceedings.

‘There was a problem because land was split between St Pauls, the Corporation of London and the public highway.

‘The law states that you can evict a permanent structure on the public highway.

‘As long as we move the tents every few days they are stuck.

‘But now they are moving to proceed with the eviction, we are more determined than ever to stay.

‘I am coming on the march to defend Chase Farm hospital and I will whip up a few of my friends to come with me.

‘I think occupying Chase Farm hospital is a huge step forwards, I came from Galway for exactly this sort of thing.

‘This is what I travelled 400 miles for!

‘Governments can survive gestures like marches, but to occupy something like Chase Farm hospital is tangible it is full of power, it is powerful.

‘We are for keeping the hospital open. My friends are involved in the struggle to keep Brent library open.

‘We should occupy any service threatened with closure and keep it running.

‘We need to get away from the idea that the House of Commons is the way to change things.

‘We need a multi-pronged attack, a general strike, to take to the streets, to occupy services and to force the government to collapse.

‘They are going to move to a similar sort of government to that of Greece or Italy here in this country.

‘Greece is the economic template for every European nation.

‘This means that we have to move fast to defeat them.’

A group from the Occupy London occupation decided to do a walk to parliament. Before they left, Simon More said: ‘We are doing a peace walk to Westminster to call for a radical change to the UK foreign policy away from war and towards peace.

‘We intend to remain here outside St Paul’s to develop our visions for a better world.

‘We will not be coerced in to departing.’

His friend Matthew Thomas added: ‘I believe that the foreign policy of the state is based on aggression and intimidation.

‘All the state’s interventions have been based on violence, which I am against.

‘The motivation behind all these interventions is economic, to serve the state’s financial interests.

‘The current theme seems to be profit before people. imperialism is hugely unfair, it seems that they just want to oppress smaller countries.

‘We are for collectivism and mutual co-operation not imperialism.’

Alfie Evers, a young writer, said: ‘This is my first time at Occupy St Pauls and I have come down because it has been on my agenda to stop and see and I am glad that it is still going.

‘I am massively against the big banks and corporations making the people pay for the crisis.’

At the daily General Assembly meeting the Free Assange/Manning campaign appealed to the occupiers: ‘I urge everyone from Occupy LSX to come down to the High Court on The Strand on Monday December 5th at 8.30am to support Julian Assange and Bradley Manning.’

‘We urge everyone to come down to the High Court.

‘Wikileaks is important because it has revealed the Iraq/Afghanistan war diaries which are legally admissible, historical documentation of the day-to-day activity of troops on the ground.

‘There could be potential war crimes tribunals for those who pursued these wars over the last decade.

‘Bradley Manning is the “whistle blower” who is accused of releasing these valuable documents.

‘He is facing a military tribunal on December 17 rather than a fully accountable, proper public trial.

‘He has 36 charges, one of which carries the death penalty.

‘We urge everyone to come down to the US embassy on December 16 and 17.

‘Assange must not be deported and Bradly Manning must be given a free and fair public trial.