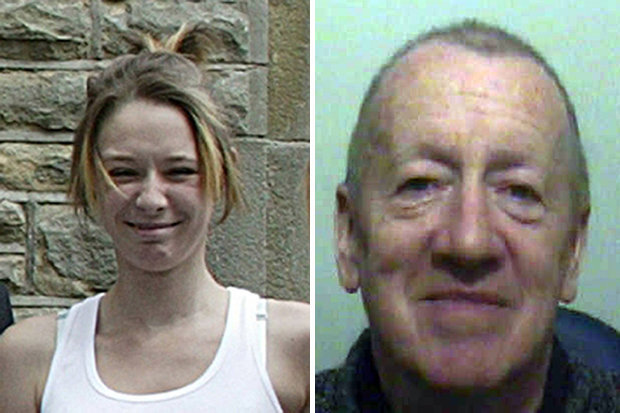 A neo-Nazi paedophile has been found guilty of murdering a school girl who vanished eight years ago.

Paige Chivers, 15, disappeared in Blackpool in 2007 following a row with her father. Her body has never been discovered.

Robert Ewing, 60, murdered the schoolgirl after developing an “inappropriate sexual interest” in her, Preston Court heard.

Ewing was also found guilty of perverting the course of justice by intimidating witnesses and providing false information to the police.

Fellow defendant Gareth Dewhurst, 46, was found guilty of perverting the course of justice and helping Ewing dispose of Paige’s body. He was cleared of the charge that he had had sex with her dead body after Ewing killed her.

Paige, who was described as “very troubled and vulnerable” packed two carrier bags with clothes and set off from the family home following the fight with her father. Later that day she was seen at a bus stop talking to an older man, believed to be Ewing.

Forensics found bloodstains containing blood from Ewing and Paige inside Ewing’s flat in 2007. However, he was not charged until last year.

The jury heard that Dewhurst had confessed to a 16-year-old boy whilst he was “heavily stoned” his involvement in the girl’s disappearance. He told the boy that Ewing had killed Paige and then made him have sex with her dead body before forcing him to use his car to dispose of her remains.

The court heard that a fortnight before Paige went missing, Ewing contacted the police with an anonymous tip that a “problem child” had turned up on his doorstep after being evicted by her father. Prosecutors said this was a calculated move to “test the water” and gauge police response. There had been “very little reaction” by officials.

In recordings made by the police, Ewing described himself as a “neo-Nazi”.

Det Supt Andy Webster, who led the investigation, told the Blackpool Gazette: “Paige Chivers was a vulnerable 15-year-old child who disappeared in August 2007.

“The court heard how Robert Ewing carefully groomed Paige before murdering her at his flat in Bispham, Blackpool.

“The prosecution case has been largely circumstantial as Paige’s body has never been recovered. A fundamental part of the prosecution case was that Paige was last seen alive with Robert Ewing, alone in his flat at teatime on Friday August 24, 2007.

“After this point there were no other corroborated sightings of her. Her blood was later found in his flat.

“When she was reported missing he failed to assist the police and then repeatedly lied to them. He has repeatedly sought to implicate other vulnerable people in her murder.

“The jury accepted that his co-accused, Gareth Dewhurst, disposed of Paige’s body and then sought to intimidate and harass witnesses. This included a family to whom he had confessed and who he subsequently sought to terrify.”

Speaking after the sentencing, Paige’s brother-in-law Robert McClelland said that “not a day goes past” when the family does not think about her.

He described Paige as a “bright and funny” girl, adding: “We all have holes in our hearts that can never be replaced.”

The court heard that a police error was made when Paige was reported missing by her father on 26 August, three days after her disappearance. He clearly stated that his daughter was a fifteen year old girl, but her date of birth was wrongly entered as 1962 instead of 1992. This meant that police thought they were investigating the disappearance of a 45 year old woman who had moved away voluntarily, rather than a child missing from home. The error was not corrected until 7 September.

The handling of the case is now being investigated by the Independent Police Complaints Commission.

Ewing and Dewhurst will both be sentenced on 28 July.

From EDL News in Britain:

Over the last three years, the British National Party and the English Defence League have held demonstrations in Blackpool over the murders or missing teenagers Paige Chivers and Charlene Downes, blaming members of the local Muslim population.

Today, BNP/EDL member Robert Ewing has been found guilty of the murder of Paige at Preston Crown Court.

Ewing groomed the vulnerable schoolgirl and then murdered her in August 2007. Paige’s body has never been found.

Among known associates of Ewing were:

None of the above protested the trial of Ewing.