This video from Australia says about itself:

The feeding of the Rainbow Lorikeets at Bungalow Bay Koala Village which is on the North-east side of Magnetic island, just off the coast of Townsville, Queensland.

We report the first DNA sequence-based phylogeny of parrots known as lories and lorikeets.
•

The group is inferred to have originated within the last 10 million years in New Guinea.
•

Dispersal and founder-event speciation have been important in their diversification.
•

Dispersal appears to have been primarily ‘downstream’ from New Guinea and Australia.
•

Some genus level changes to the group’s systematics are recommended.

The lories and lorikeets (Aves: Loriinae: Loriini) are a readily recognizable, discrete group of nectarivorous parrots confined to the Indo-Pacific region between Wallace’s Line and the Pitcairn Island group in the central-east Pacific Ocean. We present the first phylogenetic analysis of all currently recognized genera in the group using two mitochondrial and five nuclear loci.

Our analyses suggest a New Guinean origin for the group at about 10 million years ago (95% HPD 4.8–14.8) but this origin must be interpreted within the context of that island’s complicated, recent geological history. That is, the origin and early diversification of the group may have taken place as New Guinea’s Central Cordillera arose and the final constituent terranes that form present-day New Guinea were accreted. The latter activity may have promoted dispersal as a key element in the group’s history.

We have detected several instances of dispersal out of New Guinea that we argue constitute instances of founder-event speciation. Some phenotypically cohesive genera are affirmed as monophyletic but other genera are clearly in need of taxonomic dismantlement and reclassification. We recognize Parvipsitta Mathews, 1916 for two species usually placed in Glossopsitta and we advocate transfer of Chalcopsitta cardinalis into Pseudeos Peters, 1935. Other non-monophyletic genera such as Charmosyna, Psitteuteles and, probably, Trichoglossus, require improved taxon sampling and further phylogenetic analysis before their systematics can be resolved. Cursory examination of trait mapping across the group suggests that many traits are ancestral and of little use in determining genus-level systematics. 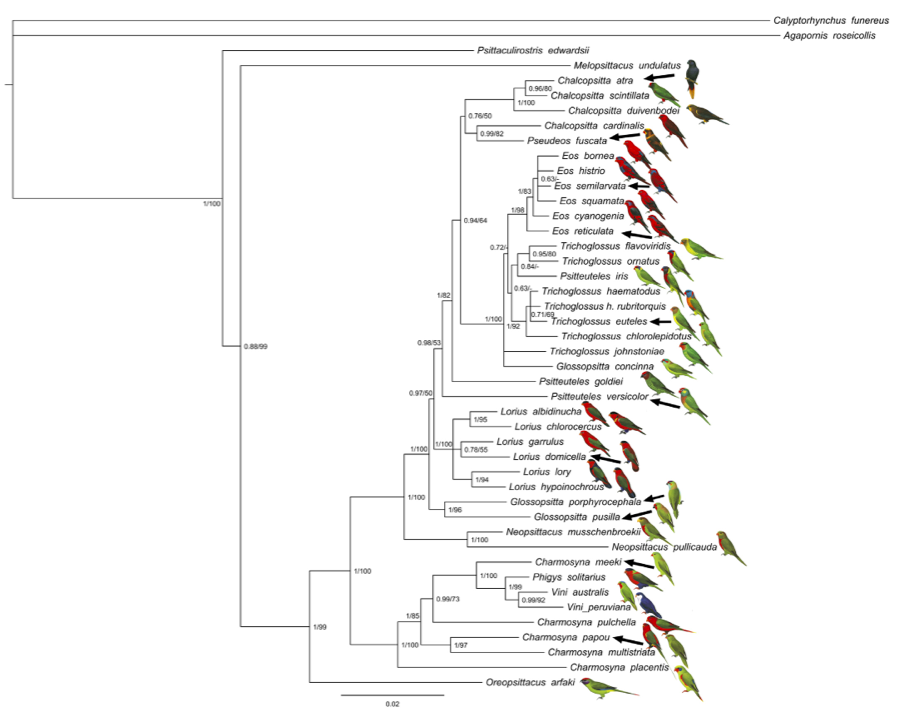