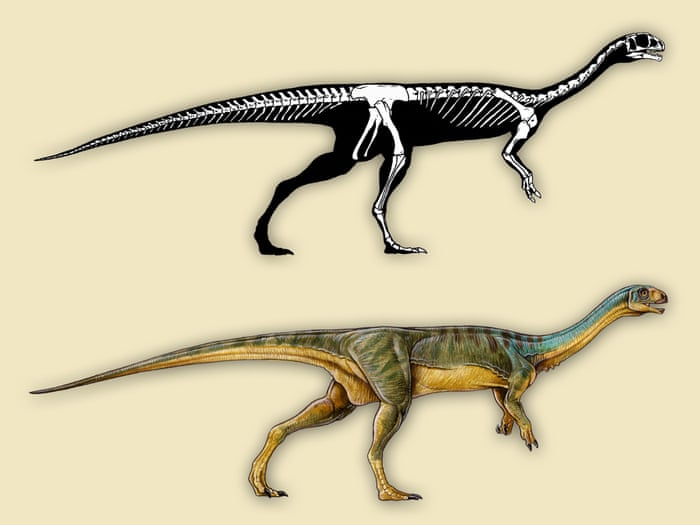 Chilesaurus diegosuarezi was related to Tyrannosaurus rex, but was vegetarian and has other curious features

Fossil hunters in Chile have unearthed the remains of a bizarre Jurassic dinosaur that combined a curious mixture of features from different prehistoric animals.

The evolutionary muddle of a beast grew to the size of a small horse and was the most abundant animal to be found 145 million years ago, in what is now the Aysén region of Patagonia.

The discovery ranks as one of the most remarkable dinosaur finds of the past 20 years, and promises to cause plenty of headaches for paleontologists hoping to place the animal in the dinosaur family tree.

“I don’t know how the evolution of dinosaurs produced this kind of animal, what kind of ecological pressures must have been at work,” said Fernando Novas at the Bernardino Rivadavia Natural Sciences Museum in Buenos Aires.

“What’s surprising is that in this locality the most bizarre dinosaur is not the exception, but the rule. It is the most abundant animal we find,” he added.

The first fossilised bones of the beast were discovered in 2004 when a Chilean couple, who are geologists, were studying rocks in the Andes to understand how the mountain range formed. The couple’s son, Diego, was playing nearby when he found a fossilised bone that turned out to belong to the new species.

The discovery prompted the geologists, Manuel Suarez and Rita de la Cruz, to team up with Novas and other scientists and return to the site, called Black Hill, in a breathtaking rocky expanse near General Carrera Lake in southern Chile.

On returning to the site, the researchers found bones from at least a dozen of the strange animals, including four nearly complete and well-preserved skeletons. The skeletons showed that the weird mix of head, neck, shoulder, rib, pelvis, leg and tail bones all belonged to the same creature.

Other anatomical peculiarities have surprised paleontologists. Its forelimbs were stocky, like an allosaurus, and instead of sharp claws, it sported two stumpy fingers. Most of the Chilesaurus remains belonged to juveniles, no larger than turkeys, but the team found bones from adults too that suggest the animals reached 3 metres from snout to tail when fully grown.

The remains of the animals were found alongside bones of small prehistoric crocodiles and huge herbivorous cousins of diplodocus. The researchers hope to return to the site next year to uncover more bones, including those of the predators that must have stalked the land long before the Andes had formed.

The curious form of Chilesaurus is an extreme example of mosaic convergent evolution, where different parts of an animal adapt to the environment along the same path taken by other creatures.

Paul Barrett, a dinosaur researcher at the Natural History Museum in London said Chilesaurus ranks as one of the most interesting dinosaur discoveries of the past 20 years.

“It has an unbelievably weird mixture of anatomical features. If you found isolated bones from this one animal in different places you’d probably conclude that the bones came from completely different dinosaur groups, rather than representing one unusual species,” he said.

“It shows that dinosaurs were experimenting with a wide range of body types and that some unexpected features like a vegetarian diet turned up independently again and again in the ‘predatory’ theropod dinosaurs.”

“Its relationships to other dinosaurs are really tricky to pin down because of this mix of features and it wouldn’t surprise me if its position in the dinosaur evolutionary tree changes regularly as more people see the material,” he said.