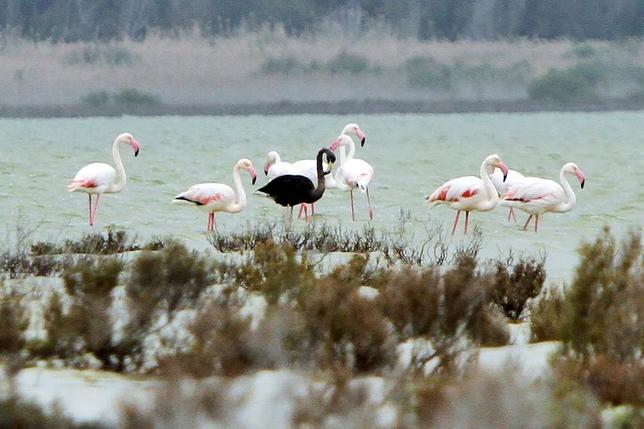 An extremely rare black flamingo has been spotted on the Mediterranean island of Cyprus, exciting nature lovers who said it may be the only bird of its type ever seen.

The flamingo, seen on the banks of a salt lake on Wednesday morning, is thought to have a genetic condition known as melanism, which causes it to generate more of the pigment melanin, turning it dark, rather than the usual pink color.

“From what have seen on the Internet, there was only one other sighting … in Israel, so maybe this is the second one,” said Pantelis Charilaou, head of the environmental department of the British Sovereign Bases, territory under the control of former colonial power where the bird was seen.

The flamingo, entirely black, save for a tuft of white feathers on its rear, was feeding with others on the banks of the lake on Wednesday afternoon. Experts said it may be the same one that was spotted in Israel in 2014.

The sighting in Cyprus happened during a flamingo count at a sprawling salt lake at the Akrotiri environmental center on the southern coast of Cyprus.

“A melanistic individual is a very, very rare sighting … basically its the opposite of an albino when the individual produces more melanin than normal,” Charilaou told Reuters Television.

Up to 20,000 greater flamingos descend on Aktoriri salt lake each year.

The “Nature Watchdogs” keeping Cyprus’ wildlife safe.
Each morning, volunteers patrol Cyprus’ most valuable natural habitats in order to keep them in pristine condition. This is their story: here.