This video from Canada is called How to Report Barn Swallow Nests on Project NestWatch.

From the Cornell Lab of Ornithology in the USA:

Happy New Year, NestWatchers! Now that 2014 is under our belts, it’s time to look back and celebrate all that we accomplished last year. In total, 16,981 nest attempts were monitored by 1,524 NestWatchers! Data were also received from Canada, Puerto Rico, and Australia last year.

A total of 163 species were monitored, which collectively laid 55,172 eggs. Of those that hatched, NestWatchers counted 37,681 fledglings last year. Eastern Bluebird continues to lead the top 20 list, but this year, there was a surprise as Herring Gull crept into the top 20 for the first time ever (thanks to some ambitious Cornell students at Shoals Marine Lab). 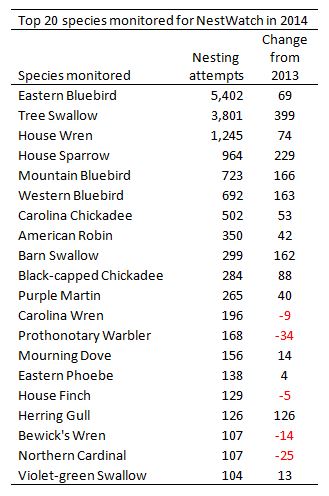 There were also 11 new species monitored for the first time last year, including some birds from Down Under you may not recognize. Below are the newest additions to the database. 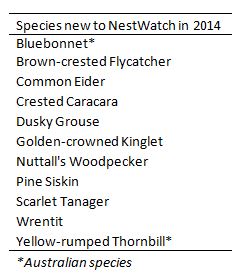 We thank everyone who participated in 2014 for your diligence, time, and contributions to science. We couldn’t do what we do without your help!