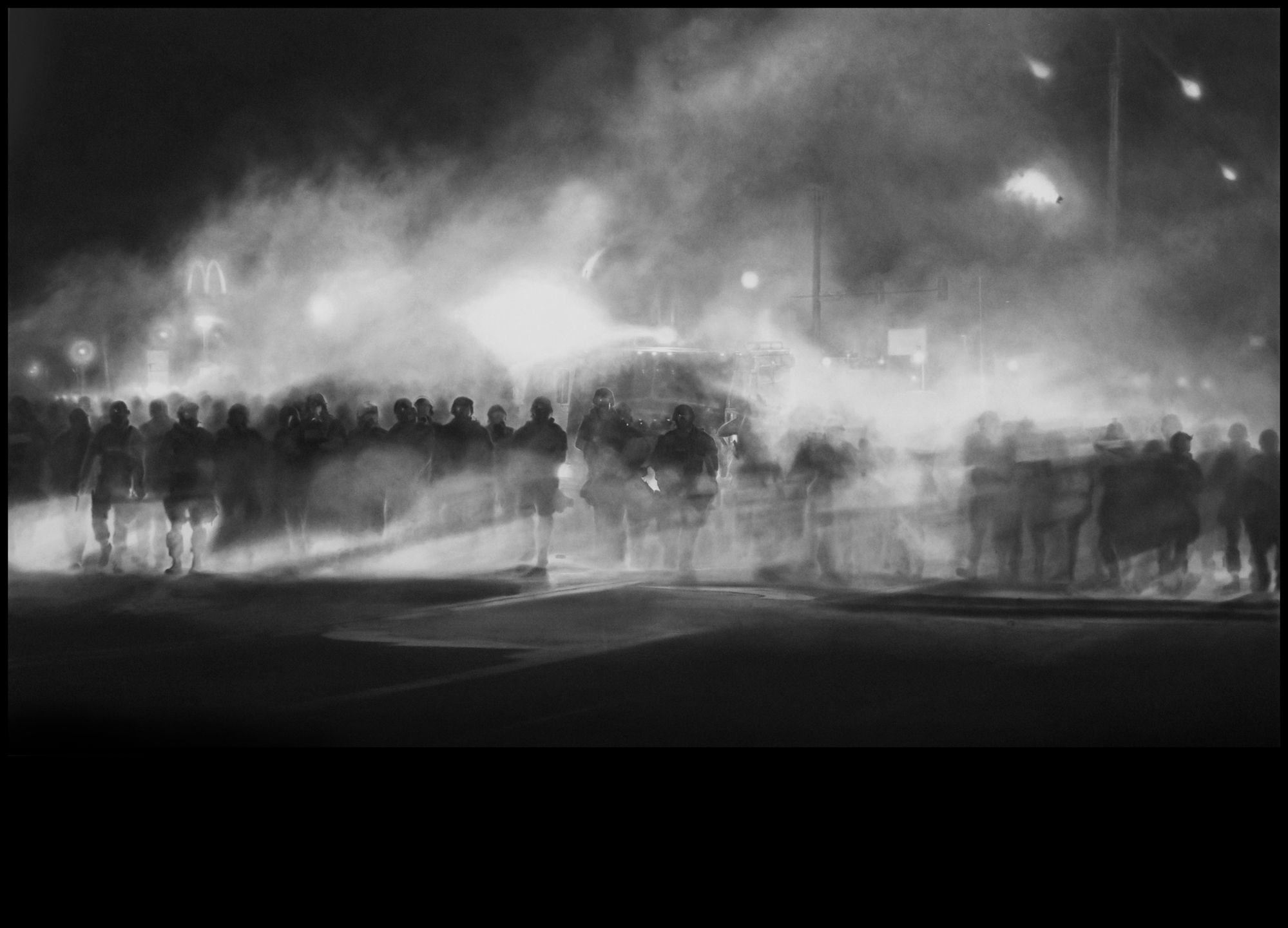 From Quartz blog in the USA:

At Art Basel Miami Beach—which opened to the public today, but has been in preview and pre-party mode since Tuesday—the mood is decidedly beachside bacchanalian. Money, sex, and, sun compete with contemporary art for starring roles at the fair, which feels far removed from the outside world and its turmoil. That is, until one turns a corner at the convention center to meet a 10-foot-wide drawing in deepest, matte-black charcoal of a faceless Ferguson police force, its riot gear backlit in a smoky haze.

Untitled (Ferguson Police, August 13, 2014) was drawn by Robert Longo, a New York artist whose photorealistic drawings of pummeling waves and great white sharks convey extreme power. This piece, however, like Longo’s recent seven-panel drawing of the US Capitol Building, conveys something darker, commanding viewers—especially American ones—to pay attention to their current moment and place in society.

Longo used a composite of photojournalists’ images of the rioting in Ferguson, Missouri, in the days after Michael Brown was shot and killed by police officer Darren Wilson on Aug. 9. A grand jury last week decided not to indict Wilson for Brown’s death.

“My intent with this work is to evoke the tradition of epic historical battlefield paintings,” said the artist in a statement. “The innumerable amount of images of massed militarized riot police in the streets was shocking to me. It was surreal to see this kind of show of police force on the streets of America, amongst the McDonald’s and Exxon stations…This was not a Hollywood movie. This was not Russia or China or the Middle East. It was here in America on an American street where a violent response to protest had reached an extreme level.”

While collectors and visitors at Art Basel in Miami gazed at Longo’s piece, New Yorkers marched up Broadway to protest yet another non-indictment of a police officer for killing a black man, Eric Garner. If the last few months are any indication, Longo may have American battlefields to portray for some time to come.

The unrest in Ferguson, Missouri, sparked by the killing of 18-year-old Michael Brown by a white police officer, has had a deep influence on art there and throughout the US: here.

Images of fire, protests, and tear gas from Ferguson, Missouri, Mexico City, and downtown Los Angeles have circled the globe through social media the last six months. They landed in the inbox of painter Sandy Rodriguez, who works out of a studio in South L.A.’s Leimert Park: here.

The militarisation of police is happening worldwide, but allowing our cops to act like soldiers threatens our future, writes Hamilton Wende. Johannesburg – The tear gas and gunshots of Ferguson, Missouri, resonate eerily through this country. South Africans watching this conflict taking place thousands of kilometres away on their TV screens experience a complex set of emotions: here.