Bahrain Will Stamp Out Popular Protests, but Not Support for ISIS

Bahrain is officially a part of a regional military coalition fighting the brutal, oppressive offshoot of Al Qaeda known as ISIS that has violently taken over large swathes of territory in Iraq and Syria. But the monarchy-backed government still seems to be turning a blind eye towards ISIS sympathizers, financiers and sectarian preachers within the country. Government critics say this move helps them create sectarian tension, which is used to silence pro-democracy activists in Bahrain, who have been leading a movement for reform since 2011.

A recent social media campaign presents a clear example of the growing support for ISIS in the tiny island kingdom. In one YouTube video, four Bahraini ISIS members call on other Bahrainis to take up arms and join the fight against their ruling “tyrants”, the Sunni Al Khalifa royal family, and the country’s majority Shia population. Despite this, there has been no public investigation of the video.

Other videos have called for support for ISIS and incited sectarian violence.

The poster of the videos, AbuAldergham, as he calls himself, has challenged the authorities by publishing his real name, phone number, and personal history online:

“I am Abu Dergham Al Hijri.

I graduated from the Religious Institute

The country’s cyber-crime unit, which routinely targets bloggers and human rights activists with detention and imprisonment, has not arrested the creators of these videos.

To give another example, Abdulla Mubarak Albinali, brother of Turki Albinali, the mufti or person in charge of interpreting Islamic law for ISIS, has been publishing pro-ISIS content online for some time. He was briefly questioned by Bahraini authorities, but has not been arrested. His other brother, Mohammed Mubarak Albinali, is the ISIS fighter “Abu Alfida Alsalami” from the YouTube call for arms referenced above. Both brothers received praise from their father Mubarak Abdulla Albinali, who many claim is a lieutenant colonel.

Do these people believe they will not face repercussions for their actions? Bahraini human rights defenders observing the situation have raised this very question. Many believe the regime wants to encourage a sectarian narrative to crush the independent movement for greater human rights protections in Bahrain.

It could prove difficult for Bahraini authorities to counter the threat of extremist groups — after all, they have worked with them actively in the past. Extremist groups were summoned as a part of the crackdown on the 2011 uprising, which saw thousands upon thousands take to the streets to demand several different reforms and freedoms from the government.

The crackdown encouraged sectarianism, a witch hunt of “traitors,” the demolition of Shia mosques and bigotry and insults from police forces. It required entities who would support the rhetoric of a sectarian divide, and for that extremely sectarian groups were needed.

In fact, Turki Albinali, the mufti for ISIS mentioned above, rose to prominence as a member of counter-revolutionary forces that were used to resist those who were seeking change in Bahrain. In the video below from 2011, he makes a speech to a group in Busaiteen calling on them to “defend” their nation against the “traitors” — a reference to the pro-democracy demonstrators in Bahrain. Among those in the audience are people carrying axes, sticks and swords. Albinali even received the blessing of some high-level officials who visited the gathering in Busaiteen. Yet they experienced no repercussions from authorities because they were in line with the sectarian narrative that was being employed.

Turki Albinali exploited the platform provided to extremists. He gave Friday sermons, inciting hatred against the protesters. He also held protests in front of the United States Embassy in Bahrain, waving ISIS flags.

This rise of sectarianism was no surprise — it rapidly became an unspoken state-sponsored policy. As New York Times journalist Nicholas Kristof put it:

My New York Times colleague Michael Slackman was caught by Bahrain security forces a few weeks ago. He said that they pointed shotguns at him and that he was afraid they were about to shoot when he pulled out his passport and shouted that he was an American journalist. Then, he says, the mood changed abruptly and the leader of the group came over and took Mr. Slackman’s hand, saying warmly: “Don’t worry! We love Americans!”

“We’re not after you. We’re after Shia,” the policeman added. Mr. Slackman recalls: “It sounded like they were hunting rats.”

The government of Bahrain did not intervene to stop the rise of the likes of Turki Albinali for the same reason it did not join the Gulf-wide crackdown on the Muslim Brotherhood. They are valuable allies who endorse the sectarian narrative of the regime against social uprising. These groups may be the regime’s last ally inside Bahrain.

This will not be the first time Bahrain has contributed to the growth and empowerment of militant groups. In his book “The Professionals – Politic and Crime – International Moneylaundering,” Heinz Duthel writes:

“After September 11, 2001, money laundering become a major concern of the US Bush administration’s war on terror, although critics argue that it has become less and less an important matter for the White House. Based in Luxembourg, Clearstream, “a bank of banks” which practice “financial clearing”, centralizing debit and credit operations for hundreds of banks, has been accused of being a major operator of the underground economy via a system of un-published accounts; Bahrain International Bank, owned by Osama bin Laden, would have profited from these transfer facilities.”

The use of Bahrain as a financial haven for militant groups isn’t new, but what’s alarming is their ability to grow recently, to the extent where a member of Bahrain’s royal family was tweeting in support of ISIS from his Twitter account featuring a backdrop photo of the group’s flag (his account is currently suspended).

Another member of the royal family promoted Jabhat Al Nusra (a branch of Al Qaeda) “stocks:” 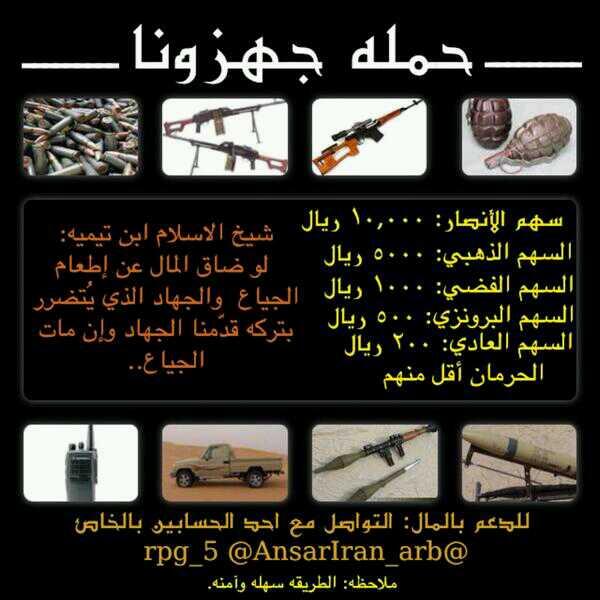 The issue could soon become a concern for Saudi Arabia, which is battling Al Qaeda within its kingdom. Bahrain sits just off the coast of Saudi Arabia, separated by a narrow stretch of water only a few dozen kilometers wide. The two neighboring kingdoms share chummy relations — Saudi Arabia sent troops to Bahrain in 2011 to help suppress a popular uprising there.

In the recent Dalwa massacre in Al Ahsa in the Eastern Province of Saudi Arabia, three men who fought in Syria for Al Qaeda allegedly opened fire on a group of Shia Muslims, killing five. This attack could easily have been planned in Bahrain. Not long after the violence, Al Qaeda decided to once again join arms with ISIS, and many times before Bahrainis were arrested in Saudi for attempting attacks related to Al Qaeda.

Something similar could even happen in Bahrain. In fact, Bahrain’s Foreign Affairs Minister Khalid Al Khalifa tweeted in response to the killing:

Had it not been for the care of Allah and the alertness of the security apparatus, we wouldn’t have been surprised if a crime such as the one in Al Ahsa occurred in Bahrain. Thank you Interior Ministry

Bahrain is holding its first elections for a new parliament since the Arab Spring-inspired protest three years ago. But the opposition called on Bahrainis to boycott the polls. Former MP Ali Alaswad explains why: here.

Bahrain’s elections a closed shop for migrant workers. Turnout drive still leaves migrant workers – more than half the population – without a say in mainstream politics amid stalled moves to reform rights: here.

The US has seized on Syrian air force strikes on the Islamic State of Iraq and Syria (ISIS) stronghold of Raqqa to denounce Syrian President Bashar al-Assad and push for his government’s removal. For the past three years, the Obama administration has backed anti-Assad militias in Syria. The main aim of its new Middle Eastern war remains regime-change in Damascus: here.