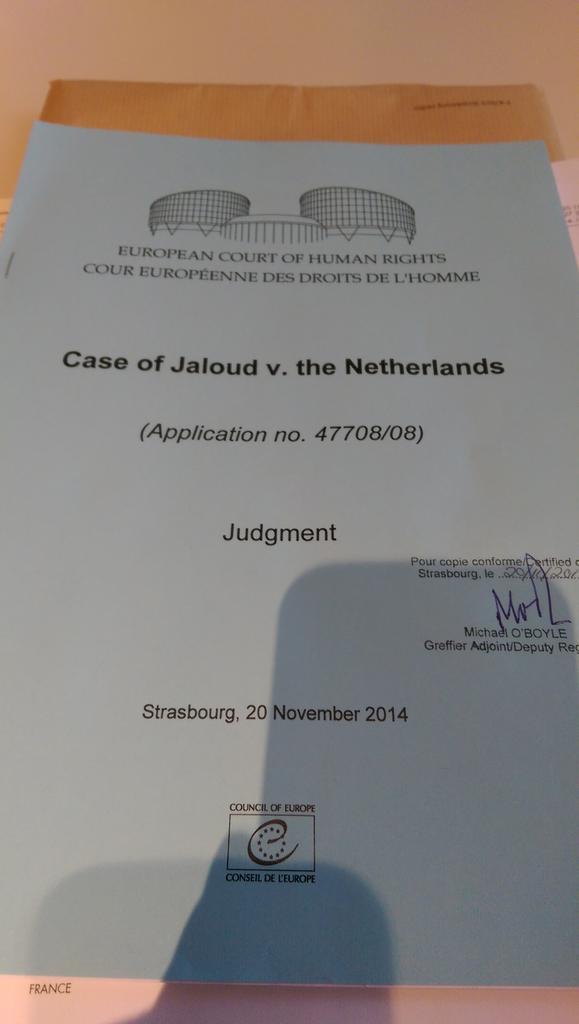 The Netherlands failed in investigation of death of Iraqi

The Dutch Public Prosecutor has made great mistakes in an investigation into a Dutch soldier who shot a man dead in Iraq in 2004. This is the judgment of the European Court of Human Rights.

The prosecution did not want to prosecute the lieutenant and the court in Arnhem agreed with that. The relatives of the dead Iraqi did not accept this, and went to the European Court. Which has now ruled that the Dutch investigation was no good.

The European Court concluded that the Netherlands has breached Article 2 of the European Convention on Human Rights. The investigation into the shooting incident at different points was not any good. As the prosecution omitted witness statements. The preparation for the hearing of the soldier involved also was not good. The autopsy of the victim was incorrect as well and the bullets inside the body disappeared.

Because of this, the investigation into the fatal shooting was ineffective and The Netherlands failed, the Court finds unanimously. The Netherlands should pay the relatives of the victim 25,000 euros compensation.

“We have been fully vindicated,” said lawyer Liesbeth Zegveld. “That is what you do it for. For ten years, I have every three months called the father of the victim. This afternoon I will do that again, but finally with some good news.”

According to Zegveld the ruling says that the prosecution deliberately tried to cover up the case.

The victim, Azhar Jaloud, was shot in April 2004 at a checkpoint near the Dutch base in Ar Rumaythah. The Iraqi was in a car driving at a roadblock.

A Dutch lieutenant shot 28 times at the car because he thought, in his own words, that shots were fired from the car and that Iraqi soldiers had opened fire. The prosecution did not prosecute him because supposedly it would have been a self-defense situation. Moreover, it supposedly would not have been clear whether the victim died by Dutch or by Iraqi fire.

The family of the victim started a so-called Article 12 procedure to force the prosecution to prosecute yet, but the court in Arnhem declined. According to the military chamber of the court it was understandable that the lieutenant thought he was being attacked.

In the proceedings before the European Court, unexpectedly testimony surfaced by eleven Iraqi soldiers. Who said they had not shot.

According to lawyer Zegveld the Public Prosecutor had deliberately omitted these statements. “Therefore, we have filed a complaint for perjury. The National Police is working on that now. The Court’s ruling adds additional arguments to our complaint.”