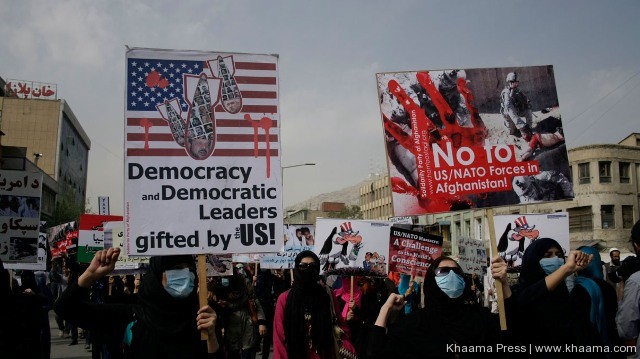 From emptywheel in the USA:

Described Focus of Protest in Kabul Dependent on News Outlet

A protest variously described as featuring “over a hundred”, “hundreds” or “over 500″ protesters took place in Kabul on Sunday. The object of the protest, however, was very dependent on whose report (or even whose headline) on the protest is being read.

The Wall Street Journal ran with the headline “Islamic State’s Siege of Kobani, Syria Sparks Protest in Kabul, Afghanistan” while Iran’s PressTV went with “Afghan protesters blast US-led forces, BSA”. Remarkably, Afghanistan’s Khaama Press did not see it necessary to spin the focus of the protest in a particular direction, using the headline “Afghans protest against Islamic State, US and NATO forces in Kabul”.

The Khaama Press article quickly sums up the protest:

Over 500 people participated in a demonstration against the Islamic State and presence of US and NATO forces in Afghanistan.

The protesters were shouting slogans against the presence of US and NATO forces in Afghanistan and in support of the Kurdish people who are fighting the Islamic State militants.

Protesters were also carrying signs purporting crimes committed by US and NATO forces in Afghanistan and resistance of the female Kurdish fighters against the Islamic State.

The US and NATO were also accused by protester[s] for supporting the extremist groups in Afghanistan and Kobane.

We learn in the article that the protest was organized by the Solidarity party of Afghanistan, which Khaama described as “a small and left wing political party in the country”. Presumably, since they were allowed to stage the protest, the ban on the party issued in 2012 must have been lifted.

One has to read the Wall Street Journal article very carefully to find any evidence of the US criticism that was in the protest. The article opens:

Residents of Kabul have a war on their own doorstep: The provinces around the Afghan capital have seen an upsurge in violence this year.

But the conflict in Syria was on the minds of demonstrators who marched Sunday in solidarity with the town of Kobani, Syria, currently under siege by Islamic State militants.

Over a hundred Afghans—most of them women—held placards supporting Kurdish fighters defending the city.

Near the end, the article mentions, but dismisses as “conspiracy theory”, the accusations of US involvement in the creation of ISIS:

Conspiracy theories often thrive in Afghanistan, and at Sunday’s protest, many demonstrators expressed the belief that Islamic State was a U.S. creation. Some held placards saying, “Yankee Go Home.”

The article then mentions the BSA without stating that it was also a target of the protest other than citing the “Yankee Go Home” sign.

KABUL (Pajhwok): Calling the new government as undemocratically elected, hundreds of people on Sunday took to the streets in the central capital Kabul, condemning security accords with the US and NATO.

The protestors, including women, marched from the Cinema Pamir locality to the Maiwand Square in Kabul City.

They called the Bilateral Security Agreement (BSA) with the US and the Status of Forces Agreement (SOFA) with NATO as shackling the nation into chains of slavery.

The protestors claimed permanent US military bases in Afghanistan could be a step towards a third world war.

The protest was organised by the National Solidarity Party. A member of the party, Hafizullah Rasikh told Pajhwok Afghan News the demonstration was aimed at condemning the presence of US/NATO forces in Afghanistan under the BSA and SOFA.

“The new government is not based on people’s votes but a deal brokered by (US president) Obama and (secretary of state) John Kerry,” he added.

12 thoughts on “Afghans demonstrate against NATO occupation and ISIS”