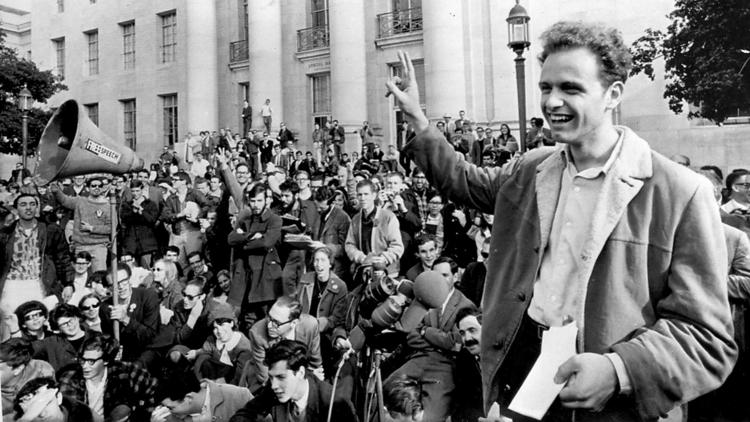 Fifty years ago, Jack Weinberg was the first to be arrested in an unprecedented student protest over free speech restrictions on the UC Berkeley campus. Thousands of demonstrators surrounded the police car in which Weinberg was detained for 32 hours. Subsequent protests went on for months.

While UC authorities had hoped for a quick return to order, a seminal youth rebellion — the Free Speech Movement — was born on Sproul Plaza instead. Historians say its national influence persists through decades of political activism, on and off college campuses.

This week, the university that once sought to censor Weinberg and other leaders of that movement is welcoming them back as heroes and historical figures.

Berkeley is commemorating the half-century anniversary of that tumultuous fall 1964 semester with lectures, classes, concerts, exhibits and other activities that will culminate with a rally Wednesday at Sproul Plaza.

“Fifty years have passed, and it’s pretty safe to be a supporter of the Free Speech Movement now,” said Weinberg, 74, who is a consultant to groups seeking to clean up environmental pollution. As in many disputes, the losing side now embraces the cause it had fought, he said.

Free Speech activists — many now with adult grandchildren — have held previous reunions and been lionized and sometimes vilified in films and books. But UC itself had been at best lukewarm to them until this week’s Golden Bear-hug.

“The university is taking ownership of its own history, and that’s really healthy,” said historian Robert Cohen, a professor from New York University who is teaching this term at Berkeley. As part of an annual common book reading, all incoming Berkeley freshmen and transfer students were assigned “Freedom’s Orator,” Cohen’s biography of the late Mario Savio. The philosophy student, despite an earlier stutter, became the most eloquent spokesman for the Free Speech Movement.

For students to hear Weinberg and other activists explain the Free Speech Movement “would be like Thomas Jefferson coming back and explaining the Declaration of Independence and the American Revolution,” Cohen said. “It’s really a unique opportunity to get the perspective of the people who made this history.”

Because of their ages, participants say that this may be the last major reunion and chance to have Free Speech leaders interact with students. (Savio died of a heart attack in 1996 at the age of 53, when he was a Sonoma State professor leading a protest against tuition increases.)

Veterans of the movement, who are organizing some events separate from UC-sponsored ones, say they hope to inspire today’s quieter and more career-focused generation of students to activism on a range of issues.

“We are going to say if there are things you care about, do something about it. That’s what we did,” said Jackie Goldberg, 69, a leader who became a Los Angeles school board member, city councilwoman and state Assembly member.

Lynne Hollander Savio, Mario‘s widow, said students today are less likely to be politically active since many hold jobs to pay school bills and graduate with debt. (UC fees were only about $240 in 1964, compared with the $12,900 in tuition and fees today.)

“Students are much more anxious now than we were because they have these tremendous economic burdens we did not have,” said Hollander Savio, 73, a former librarian who is a reunion organizer.

Free speech in academia remains a hot topic — even at Berkeley. Chancellor Nicholas B. Dirks set off a controversy recently when he upheld free speech rights in a campus-wide email but also urged “civility” in exchanges. Some faculty and students complained that “civility” was a code word to censor heated debate. Dirks later said he was misunderstood and “did not mean to suggest any constraint on freedom of speech.”

On campus, generational changes in faculty and administration have eased old tensions, and the school now has “a significant degree of institutional pride” in the 1964 protests, Dirks said.

For example, he noted that an alumnus funded the Free Speech Cafe in Moffitt Library, where photos of the demonstrations are displayed. And a year after Savio’s death, UC named the steps in front of the Sproul administration building after him — the spot where Savio and about 800 students were arrested after a sit-in in December 1964 and where Savio delivered his famous speech about civil disobedience against what he described as the repressive UC machine: “You’ve got to put your bodies upon the gears and upon the wheels, upon the levers, upon all the apparatus, and you’ve got to make it stop.”

This video is called Mario Savio on the operation of the machine.

The long-revoked restrictions on campus activism may baffle students who frequently pass recruiting tables for social and political causes, according to Chloe Hunt, editor of the Daily Californian campus newspaper. A ban “is almost inconceivable,” said Hunt, who is helping to publish a commemorative book including the paper’s 1964 coverage.

Before fall 1964, students’ politicking had been limited to a small sidewalk strip thought to be off-campus and immune from university restrictions. Then students such as Savio returned from searing experiences as civil rights workers in the South and sought to expand campaigns in California, upsetting some state legislators.

After learning that the property was owned by UC, school authorities moved to shut down the area and ban the tables and pamphleting there. Activists such as Weinberg challenged the rules by resuming their activities. Three months of confrontations, demonstrations and negotiations followed and became international news. Eventually, the restrictions were lifted with some limitations — a victory that paved the way for later protests supporting women’s’ rights and environmentalism and opposing the Vietnam War.

Cohen and other scholars also note that Ronald Reagan was elected governor in 1966 in part on his pledge to “clean up the mess at Berkeley,” empowering a national conservative movement.

Many students in Cohen’s classes this semester seemed amused by a video of Reagan’s 1966 campaign speech advocating that protesters should be “taken by the scruff of the neck and thrown out of the university once and for all.”

Some students said they were suspicious of UC’s motives in embracing the movement so publicly. “The university hated it back in the day and now it is using it as a kind of selling point,” said history major Jacob Elsanadi, 19. Trying to bolster the campus “brand” with it, he said, is “against what the movement stood for.”

“The right to free speech can sometimes get messy,” Weinberg said. “That’s part of the cost of freedom and the cost of liberty.”