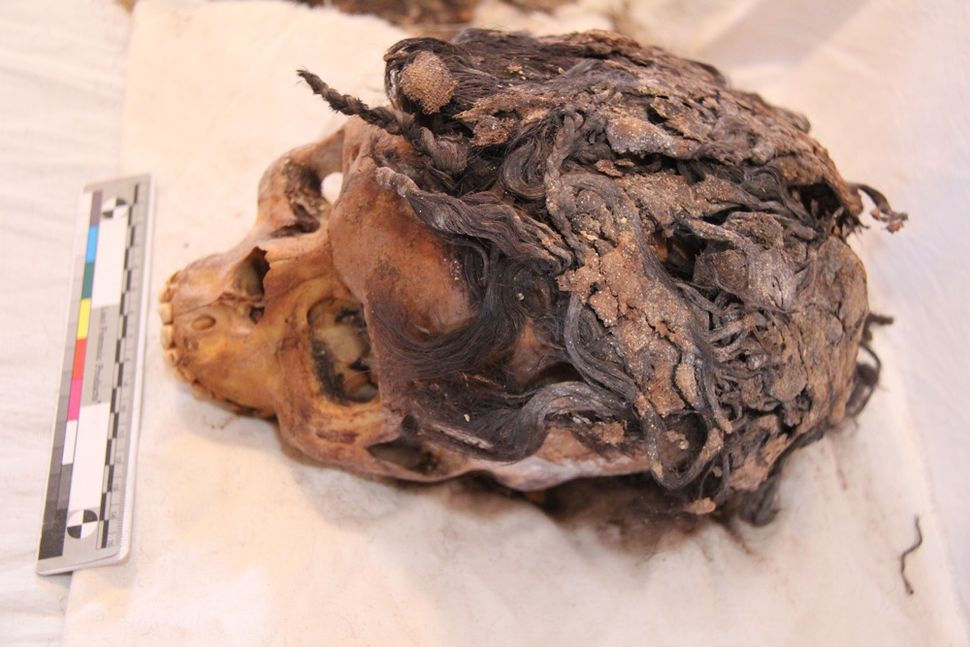 More than 3,300 years ago, in a newly built city in Egypt, a woman with an incredibly elaborate hairstyle of lengthy hair extensions was laid to rest.

She was not mummified, her body simply being wrapped in a mat. When archaeologists uncovered her remains they found she wore “a very complex coiffure with approximately 70 extensions fastened in different layers and heights on the head,” writes Jolanda Bos, an archaeologist working on the Amarna Project, in an article recently published in the Journal of Egyptian Archaeology.

Researchers don’t know her name, age or occupation, but she is one of hundreds of people, including many others whose hairstyles are still intact, who were buried in a cemetery near an ancient city now called Amarna. [See Photos of the Egyptian Skeletons and Elaborate Hairstyles]

This city was constructed as a new capital of Egypt by Akhenaten (reign ca. 1353-1335 B.C.), a pharaoh who unleashed a religious revolution that saw the Aten, a deity shaped as a sun disk, assume supremacy in Egyptian religion. Akhenaten ordered that Amarna be constructed in the desert and that images of some of Egypt’s other gods be destroyed. Amarna was abandoned shortly after Akhenaten’s death, and today archaeologists supported by the Amarna Trust are investigating all aspects of the ancient city, including the hairstyles its people wore.

Bos is leading the hairstyle research, and the woman with 70 extensions leaves her puzzled.

“Whether or not the woman had her hair styled like this for her burial only is one of our main research questions,” said Bos in an email to Live Science. “The hair was most likely styled after death, before a person was buried. It is also likely, however, that these hairstyles were used in everyday life as well and that the people in Amarna used hair extensions in their daily life.”

Many of the other skulls Bos analyzed also had hair extensions. One skull had extensions made of gray and dark black hair suggesting multiple people donated their hair to create extensions.

As Bos analyzed a selection of 100 recently excavated skulls (of which 28 still had hair) from the Armana cemetery, she noticed the people who lived in the ancient city had a wide variety of hair types. They range “from very curly black hair, to middle brown straight,” she noted in the journal article, something “that might reflect a degree of ethnic variation.” [Photos: 10 Iconic Hairstyles That Took Root]

Those skulls with brown hair often had rings or coils around their ears, a style that was popular at Amarna, she found. Why people in this city liked it is unknown. “We still have no idea. This is of course one of the answers we are still trying to find from the record,” said Bos in the email.

People in the city also seemed to be fond of braids. “All braids found in the coiffures were simple and of three strands, mostly 1 cm [0.4 inches] wide, with strands of approximately 0.5 cm [0.2 inches] when tightly braided,” Bos writes in the journal article.

People at Amarna also liked to keep their hair short. “Braids were often not more than 20 cm [7.9 inches] long, leaving the hair at shoulder length approximately,” Bos added. “The longest hair that was found consisted of multilayered extensions to a length of approximately 30 cm [11.8 inches].”

Fat was used to help create all the hairstyles Bos found, something that would have helped keep the hair in one piece after death. More research is needed to determine whether the fat was from animals. A textile found on each of the skulls may have been used to cover part of the head.

In one case a woman has an orange-red color on her graying hair. It appears that that she dyed her hair, possibly with henna (a flowering plant).

“We are still not completely sure if and what kind of hair coloring was used on this hair, it only seems that way macroscopically,” said Bos in the email. “At present we are analyzing the hairs in order to find out whether or not some kind of coloring was used. On other sites dyed hair was found from ancient Egypt.”

This woman, among other ancient Egyptians, may have dyed her hair “for the same reason as why people dye their hair today, in order not to show the gray color,” Bos said.