This video from the USA about the Iraq war is called WMD LIES – Bush Cheney Rumsfeld – THE ULTIMATE CLIP.

The pretext for George W Bush’s Iraq war was … sorry, there was more than one pretext.

The two official pretexts before the war started were the supposed Iraqi weapons of mass destruction; and the supposed role of the secular Iraqi government in the 9/11 terror attacks in the USA by al-Qaeda religious fundamentalists. Both were lies; as Bush’s Vice President Dick Cheney himself admitted; as Bush himself admitted.

As these pretexts were exposed as lies, pro-Iraq war propaganda shifted to another pretext: Saddam Hussein ‘killed his own people’. That new propaganda line omitted that dictator Saddam Hussein’s killing of his own people had mainly happened when he was an ally of the United States government, receiving US American poison gas and Donald Rumsfeld to help him. 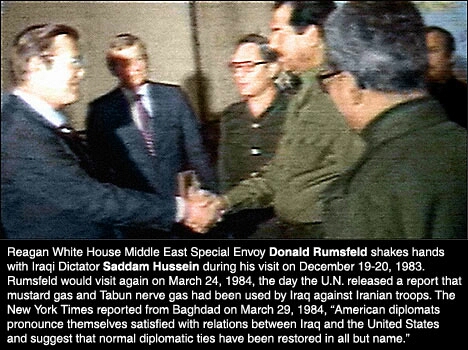 As turned out, George W Bush killed far more Iraqis than Saddam had ever done.

On to another war: the 2011 NATO war against Libya. The pretext was that the Gaddafi regime (until very recently allies of NATO countries, which sent ‘rendition’ torture flights with captive regime opponents to Libya) might ‘kill its own people’ in an offensive against rebels in the eastern city Benghazi. Soon, the NATO war aim shape-shifted from the official propaganda of ‘protecting civilians’ to regime change (meanwhile, killing civilians themselves). The regime did change. Women’s rights went down the drain. Supporters of women’s rights were murdered. People were tortured and murdered for being black. The United States ambassador was murdered. The latest news is that missiles hit the air traffic control tower and the planes at Tripoli airport. The air force of the new regime bombed Sabha city, killing civilians. The NATO propaganda machine, so noisy in 2011, kept extremely silent.

On to another war: in Ukraine. Billionaire Poroshenko became president, voted in by a minority of the electorate in elections of doubtful integrity. The new Ukrainian government proclaimed that people, especially in eastern Ukraine opposed to that government including neo-fascists of the Svoboda party and the Right Sector, were ‘terrorists’ and could be killed without any trial. The regular Ukrainian armed forces were uneasy about violence against their own civilian population; sometimes they listened to civilians asking them not to attack. However, the new Ukrainian paramilitary ‘National Guard’, being full of Svoboda, Right Sector and similar extreme Rightists, did not have such scruples at all.

They burnt scores of political opponents alive in the trade union building in Odessa city. They killed … this time not a political opponent, but a peasant women on her way to see a friend. That happened in a village, where people overwhelmingly had tended to support the new Ukrainian regime. Not so after that woman was murdered.

Apparently, the Ukrainian government’s definition of ‘terrorist’ has widened from opponent of government policies to all people living in areas where many such opponents live as well.

Will this far-Right violence affect support of the new regime in the Ukraine by the United States and other NATO countries? Not that likely. The regime change in Ukraine, and its privatisation policies, meant that the son of United States Vice President Joseph Biden was able to get his hands on lucrative Ukrainian gas money.

NINE civilians were killed today when a Ukrainian government warplane bombed a block of flats in the rebel-held town of Snizhne.

The four-storey block was hit by several missiles, causing the collapse of several tiers, while a nearby house was also destroyed.

Local residents, who counted six large impact craters, were convinced the attack had been carried out by the Ukrainian Air Force.

One resident standing beside a pile of bags said: “My home was bombed to bits.”

She appealed to Russian President Vladimir Putin to send in troops to defend the people of eastern Ukraine.

The Defence Ministry in Kiev insisted that the bombing could not have been carried out by the air force as its planes were not on sorties at the time.

He said that Snizhne had been attacked by an unknown aircraft with the aim of discrediting Ukrainian government forces.

But this would not be the first time that Kiev has denied the undeniable, searching for an anonymous scapegoat for its own bloody excesses.

The pro-Russian rebels have no access to air power and would have little interest in bombing their own territory, which leaves only Moscow to blame.

Kiev Defence Minister Valeriy Heletey had pointed the finger at Russia on Monday for the shooting down of an Antonov-26 military transport plane, insisting that only its neighbour had the capability of hitting the aircraft flying at its maximum altitude of 6,500 metres.

Rebels had reported downing the plane with SAM-6 ground-to-air missiles.

British defence analyst Charles Heyman, who edits the Armed Forces of the European Union book, pooh-poohed the Kiev line, expressing his scepticism that the transport plane could have been flying so high and backing the SAM-6 hypothesis.

“I doubt the transport plane was flying at 6,500m. That doesn’t make sense. The higher you fly, the more it costs and the plane would have had to be pressurised.

“It was probably shot down using Sam-6 missiles owned by the rebels, which they have quite a few of.”

As the Western-backed regime in Kiev assaults pro-Russian militias in the major cities of eastern Ukraine, mass graves are coming to light in Slavyansk, the former opposition stronghold recently captured by Kiev. The government offensive is unfolding with the support of Washington and the European Union (EU), which yesterday imposed more sanctions to compel Moscow to abandon any support for opposition militias in Ukraine: here.

7 thoughts on “Ukrainian government kills its own civilian people”