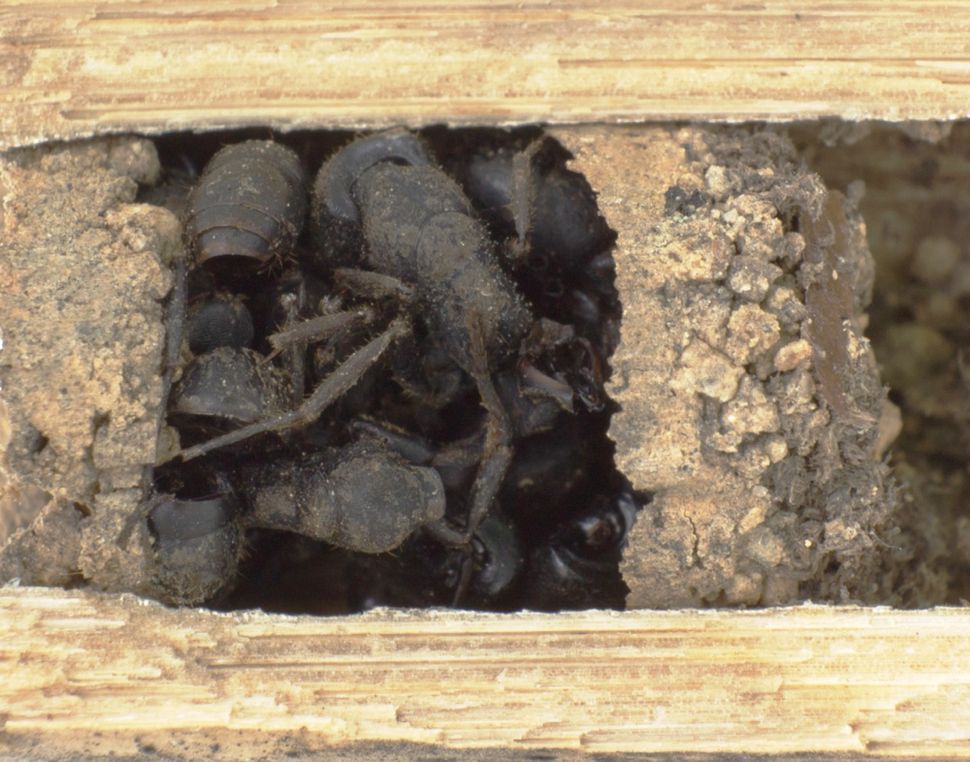 Newfound Wasp Literally Has Skeletons in Its Closet

A newly discovered wasp has been keeping a gruesome secret: It stuffs ant corpses into the walls of its home.

As far as scientists know, the behavior is unique in the animal kingdom. The new creature has been named Deuteragenia ossarium, or the “bone-house wasp,” after the historical ossuaries piled high with human skeletons found in monasteries or graveyards.

“It was a totally unexpected discovery,” said Michael Staab, a researcher at the University of Freiburg in Germany. [Zombie Animals: 5 Real-Life Cases of Body-Snatching]

Skeletons in the closet

Staab had been studying the homemaking habits of cavity-nesting wasps in eastern China, and he and his colleagues had set up trap nests in the Gutianshan National Nature Reserve, a subtropical evergreen forest in the Yangtze River Basin that’s home to steep cliffs and animals like clouded leopards and Asian black bears.

Cavity-nesting wasps may live in self-made holes or pre-existing tunnels in plants or pieces of wood. These cavities typically contain several brood cells — the wasp equivalent of a single hexagon in a beeswax comb — which are separated by thin walls made of bits of plant, resin or soil. Scientists have even found bits of insects in the mix.

But when Staab’s team collected the trap nests, they found something unusual: In 73 of the nests, the researchers discovered an outer cell packed with the whole bodies of dead ants. The species behind the corpse houses was a spider-hunting wasp previously unknown to science. The findings were detailed today (July 2) in the open-access journal PLOS ONE.

Staab said he was puzzled by the discovery until he considered the location of the carcass-filled cells. The dead ants were always found in an outer vestibular cell, a chamber built by a female wasp to close the nest after she lays eggs.

Wasp architects may favor dead ants as a building material because of the way their carcasses smell, Staab and his team suspect. Scents on the ants’ bodies, even in death, might offer camouflage or protection from predators — a red flag to stay away — as many ants are fierce defenders of their nests, the researchers wrote. The ant most commonly found in walls of wasp homes was Pachycondyla astuta, an aggressive ant species with a mean sting that’s abundant in the region.

Because the brood cells are where the wasps’ larvae live, this strategy may help ensure the survival of their young.

Staab said he and his colleagues never directly observed the wasps building one of their bone houses, nor did they see the wasps kill ants to turn them into “bricks.”

“However, due to the very good condition of all ant specimens in the ant chambers, we assume that the wasp must actively hunt the ants and not collect dead ants from the refuse piles of ant colonies,” Staab told Live Science in an email.

Other wasps — especially parasitic ones — resort to similarly grisly measures to protect their offspring. The parasitic wasp Dinocampus coccinellae, for example, hijacks ladybug bodies, turning its victims into zombie slaves that keep predators away from its larvae. And elsewhere in the animal world, other creatures — even snakes — have taken advantage of the bad reputation of ants to survive. A 2009 study in the journal Insectes Sociaux described how banded cat-eyed snakes lay their eggs in the fungus-filled chambers of aggressive leaf-cutter ants to keep their reptilian babies safe before they hatch.

9 thoughts on “Newly discovered wasp species, with dead ants in walls of its nest”