After 27 March 2014, with its resplendent quetzals and other birds in San Gerardo de Dota in Costa Rica, came 28 March. Early in the morning then, this ruddy-capped nightingale thrush singing.

A clay-coloured thrush sang as well.

A Wilson’s warbler in a bush.

A rufous-collared sparrow crosses the footpath. 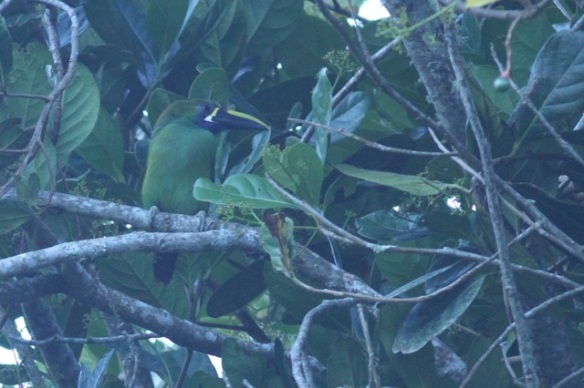 In a tree, an emerald toucanet.

A bit further, a silver-throated tanager.

At 6:50 am, the male resplendent quetzal‘s tail sticks out of the nest. He switched nest duties with the female just 45 minutes ago, so he will stay there some time yet.

A stripe-tailed hummingbird. However, hummingbirds will get a blog post of their own, so let us continue now with the yellow-thighed finch there.

This is a video of a black-faced solitaire singing.

At 7:37, as we might have expected, the male quetzal still in the nest with its tail sticking out.

As we watch the already mentioned hummingbirds feeding, another special bird: a long-tailed silky flycatcher.

It has a nest in a tree not far away. 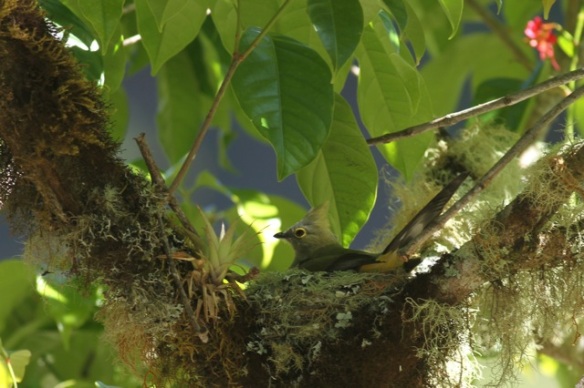 A new study has quantified a point long advocated by advocates of setting aside protected areas: ecotourism pays. The research, published in Proceedings of the National Academy of Sciences (PNAS), finds that communities neighboring conservation areas in Costa Rica had lower rates of poverty relative to other areas. The authors — economists Paul J. Ferraro of Georgia State University and Merlin M. Hanauer of Sonoma State University — attribute most of the benefit to opportunities afforded by tourism: here.