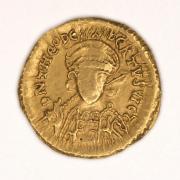 A big treasure find in Drenthe province indicates that in the sixth century, Drenthe was far more important than previously thought. It is a treasure of 47 gold coins, the largest find of this period ever in the Netherlands.

The treasure was found by two men with a metal detector. The province will not say where it was, fearing that more investigators would come. The finding was presented this afternoon by provincial executive member Rein Munniksma.

The coins have been made in several places throughout Europe, including Rome, Ravenna and Constantinople, now Istanbul. Together they weigh about 200 grams.

That there was such a huge amount of money in circulation, according to an archaeologist involved means that Drenthe was an important political factor. Most of the coins are Byzantine. The treasure also includes a very rare one, of Merovingian king Theodebert.

The money may have been a diplomatic payment, probably a pay-off to keep the Drenthe people away from the boundaries of the Merovingian kingdom. That kingdom then was from the South of France to the major rivers in the [central] Netherlands.

About the sixth century in the Netherlands little is known. There are few archaeological finds from this period, especially in Drenthe. As of June 20 the find will be on display for the public in the Drents Museum.