This video is called CASES: The Sponsorship System (Kafala) in GCC Countries: the Modern-day Slavery.

From the Institute for Global Labour and Human Rights in the USA:

Over 70 Sri Lankan, Indian and Bangladeshi garment workers have been forcibly deported from the MRS Fashions sweatshop on June 16, 17 and 18, and cheated of their back wages.

Two nights ago, on June 16, factory managers accompanied by armed police officers entered the workers’ dormitories, threatening them to return to work or be forcibly deported.

MRS Fashions’ management is linked to a serious crime: illegally confiscating workers’ passports upon arrival in Bahrain. From the moment guest workers arrive from India, Sri Lanka, Bangladesh and Burma, they are stripped of their passports. Confiscation and withholding of passports is criminal under both the Penal Code of Bahrain and under the United States-Bahrain Free Trade Agreement.

Wal-Mart and JCPenney—two of MRS Fashions’ top clients—must immediately demand that MRS Fashions management return all passports to the workers.

The guest workers went on strike demanding a desperately-needed wage increase, decent and palatable food, healthcare facilities and that the workers be treated with respect, “as human beings.”

On Sunday, June 15, factory management called 14 senior and highly-respected guest workers to join a negotiation. But this turned out to be a scam. Factory management immediately turned the 14 workers over to the police. They are now imprisoned, for no reason. The workers expect that the next step is that these 14 workers will be illegally deported.

Factory management withholds wages. This too must end.

The food supplied to the workers is of very poor quality, often rancid and past shelf-date.

MRS Fashions management employs police officers to harass and threaten workers who are seeking their legal rights and fair wages. Management routinely and illegally deports guest workers who speak up.

Right now, the workers at MRS Fashions earn just 75 Bahraini Dinar per month—which in U.S. dollars amounts to 77 cents an hour, $45.91 a week and $198.93 per month. The standard workweek is six days and 60 hours, with workers rotating between 10-hour day shifts and 10-hour night shifts. (There is no overtime premium. Factory management has told the press that the workers will soon be paid an additional BD8 per month, which would amount to a raise of 8 cents an hour and $4.90 a week.)

Workers at MRS Fashions report they exclusively produce pants including the following: 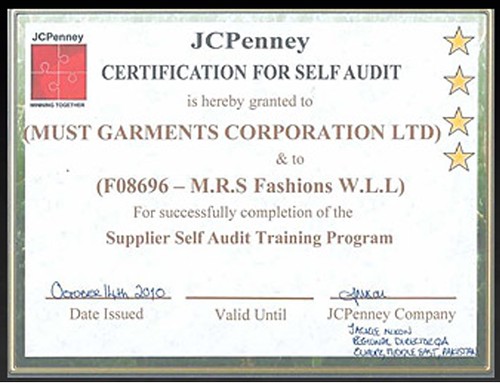 Intervention is urgently needed to assure the safety and fundamental rights of these vulnerable guest workers. Please write to MRS Fashions, its parent company and to its two major U.S. buyers, Wal-Mart and JCPenney.

Bahrain is a cluster of islands in the Persian Gulf adjacent to Saudi Arabia. Its population is approximately 1.2 million.

Prominent Bahraini activist Nabil Rajab appealed on Wednesday for the world to impose sanctions on his country, which he said had slipped into “dictatorship”: here.

Two Bangladesh workers died in an incident at a cement and concrete mixing factory in the Kingdom of Bahrain, report Bahrain-based English newspaper Daily Tribune on Thursday: here.

On 19 June, Bahrain Institute for Rights and Democracy’s Advocacy Associate, Amanda Milani, delivered an oral intervention (1:53:40) at the 26th Session of the United Nations Human Rights Council in Geneva under Item 3 on the situation of trafficking persons and migrant workers in the Gulf Cooperation Council states of Bahrain, Qatar and Saudi Arabia: here.