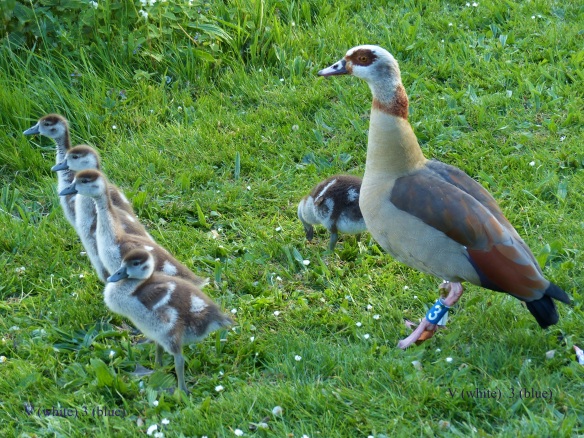 Lizia in the Hague sent me not only photos of common frogs and turtles; but also this photo of Egyptian goose goslings and their mother.

There is a story behind this photo. It was made close to the Segbroek stream near the Museon museum.

In 2013, V3 and her partner had six goslings; the same number as the Canada goose couple which they met often had in 2013. These Canada geese have been nesting in the Museon pond for five years now.

For several years V3 had her nest at the section of the brook across the President Kennedylaan, opposite the Museon museum.

The two couples met often (in 2013 and earlier) when the Canada Geese and their goslings crossed the busy President Kennedylaan to graze and to swim in this section of the brook.

Here is Lizia’s map of the surroundings of the two nests.

This video is about catching Egyptian geese in the Zuiderpark in The Hague for ringing them.

15 thoughts on “Young Egyptian geese and their mother”