Thousands rally in Bahrain ahead of auto race

MANAMA, Bahrain — Thousands have marched in the streets of Bahrain to voice their opposition to this weekend’s Bahrain Grand Prix auto race.

Witnesses say protesters Friday carried banners and chanted slogans against the government and the Formula One race, the tiny island kingdom’s biggest international event of the year. Practice runs for Sunday’s race went ahead amid tight security.

Bahrain is home to the U.S. Navy’s 5th Fleet. The country has witnessed more than three years of unrest following a Shiite-led uprising calling for reforms and greater political freedoms from the Sunni monarchy. 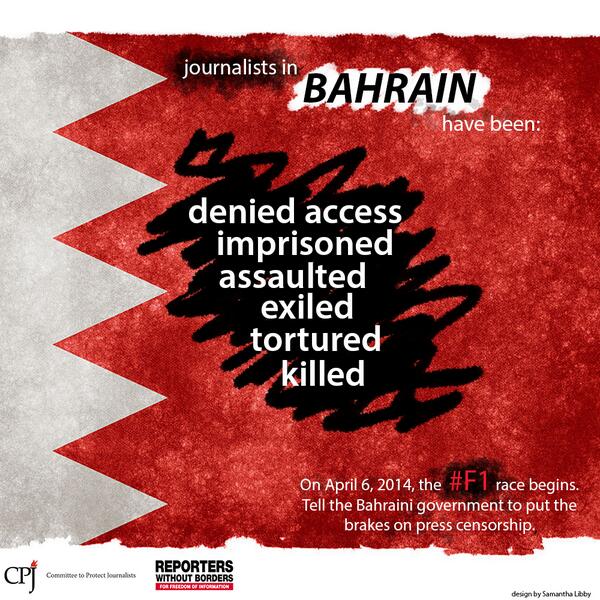 From the Bahrain Center for Human Rights:

New York and Paris, April 3[tk], 2014—The Committee to Protect Journalists (CPJ) and Reporters Without Borders (RSF) have launched a joint social media campaign calling on the Bahraini government to allow journalists to work freely during the Formula One Grand Prix race in Bahrain on April 6, 2014. Using the social media tool Thunderclap, the “Bahrain Racing in Circles” campaign participants will call for press freedom in Bahrain at the exact start of the Formula One race. As of April 2, the campaign had gained a potential audience of 2.6 million people, twice the population of Bahrain.

“It’s clear that it’s not only F1 cars that are racing circles in Bahrain, as we see the same cycle of protests, repression, and censorship every year,” said CPJ Middle East and North Africa Program Coordinator Sherif Mansour. “Every year, the Bahraini government hopes the roar of Formula One cars will drown out criticism of the regime’s human rights violations,” said Soazig Dollet, head of RSF’s Middle East and North Africa desk. “This year, we’re calling on everyone to join our F1 campaign to make sure that does not happen.”

CPJ and RSF have documented a consistent attempt by the Bahraini government to censor the press since the launch of a mass protest movement on February 14, 2011. Most recently, on March 26, freelance photographer Ahmed Humaidan was sentenced to 10 years’ imprisonment on charges of attacking a police station in 2012. Humaidan was at the station to document the incident as part of his coverage of unrest in the country.

To get more information and to join the campaign, please visit the campaign website here.

### CPJ is an independent, nonprofit organization that works to safeguard press freedom worldwide.
Reporters Without Borders promotes and defends the freedom to be informed and to inform others throughout the world

On the morning of the Grand Prix race which will take place today at 6pm in Sakhir; BCHR (Bahrain Center for Human Rights), BIRD (Bahrain Institute for Rights & Democracy) and BYSHR (Bahrain Youth Society for Human Rights), note their concern for the growing violations against civilians in Bahrain: here.

6 thoughts on “Bahraini dictatorship and Formula One racing”