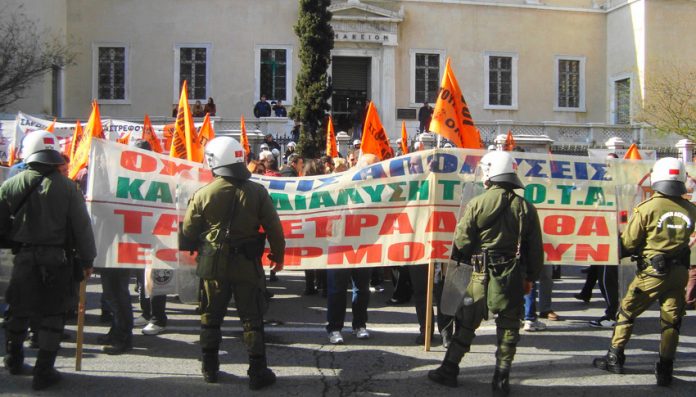 GREEK health centre workers and doctors, on indefinite strike for over a month, demonstrated once again last Thursday in Athens against a government Bill that shuts down all health centres.

Greek riot police units attempted a new tactic of containment; they use their shields and tear-gas to split protesters and clear the Athens centre streets, but they were forced to withdraw as workers filled the streets.

Later, riot police blocked a teachers’ march to the Finance Ministry with police buses. Since the new year, Greek riot police have become more aggressive and have attacked nearly every single demonstration in Athens and in other cities.

Since last summer about 3,000 teachers and 2,500 school guards have been thrown out of work and placed on the “mobility schemes” receiving just 70 per cent of their wages for eight months.

At the end of March, these teachers and school guards will either be employed in some other public sector job or sacked.

The government says that up to now only about 1,000 positions have been found for those on the ‘mobility schemes’. Speaking to the News Line outside the Council of the State, teacher Maria Othonos said that ‘as things stand we will be sacked in a month.’ Othonos and her colleagues have travelled over 1,000km from the Evros district in northern Greece, to take part in the demonstration.

Delegations of the sacked Finance Ministry cleaners and ERT (state TV and radio corporation) workers, along with some university and school students, joined the demonstration.

The coalition government headed by prime minister Samaras have also agreed to an EC-IMF plan of sacking 15,000 local government workers during 2014. Cynically the government have devised a cheap labour five-month-long programme for local government where workers would be paid a salary of between 410 and 490 euros (about £240-270).

It was clear from the trade union federations leaders’ speeches last Friday outside the Council of the State, that the mobilisation was organised purely as a show of protest against the government ‘mobility scheme’ law. Workers’ chants for an ‘indefinite strike’ and occupations were ignored.

Ten days ago the local government workers’ federation POE-OTA and the secondary teachers’ federation OLME met and agreed on ‘joint action’ against the government’s dictatorial laws. But besides last Friday’s protest, nothing concretely has been organised.

Likewise the trades unions federation GENOP, of the State Electricity Corporation (DEH), the biggest employer in Greece, staged a small protest march in reaction to a government Bill to privatise DEH in sections.

Worse still at the port workers’ federation, trade union leaders have yet to react to the government’s announcement of the selling off of Piraeus port, the biggest in the country.

As workers in Athens and other major cities demonstrate against the government, farmers in central and northern Greece on Sunday set up roadblocks and parked their tractors along motorway lanes in protest against a set of new taxes imposed on them. Last Saturday, the government accepted some minor farmers’ demands. But farmers considered the changes ‘cosmetic’ and were set for motorway demonstrations.

Last Saturday evening in Athens, the Greek Afghan Community organised a vigil in memory of the eight children and three women that were drowned in the Aegean on 20 January.

In a statement, they demanded a full investigation, the recovering of the bodies and punishment to those responsible.

The Afghan Community is also calling for refugee status for the migrants and demanded that the police stop harassing refugees.