Within days of arriving on the breeding grounds, Spoon-billed Sandpiper courtship begins. Males perform display flights over favored areas to attract females and establish territories and females select a mate. Once together, a pair becomes inseparable. They forage within earshot of each other, copulate frequently, and prospect for potential locations to nest. This video, shot during the first few days of a pair’s seasonal courtship, captures some of these rarely witnessed behaviors including an attempted copulation and a nest scrape display.

We would like to take this opportunity to thank to RSPB who has sponsored our travelling expense for this survey. Especially thank to Hoang Thanh Ha from Viet Nature, she has worked very hard to make connections among us. We also would like to thank to Wildtour Co., LTD has supported their staff to arrange logistics and carry out survey.

Mekong Delta is one of key remaining SbS wintering sites. The survey done by Birds Russia collaborated with University of Science in Ho Chi Minh city in 2011 had recorded up to 8 or at least 5 birds (Vladimir et al., 2012). In additional, by personal observations, there was 1 record in Can Gio area in end of April, 2010 (Nguyen Hoai Bao) and 1 record also in Can Gio in October 2010 (Jonathan Eames, personal communication). An older survey in 2000 by Moores, N. and Nguyen Phuc Bao Hoa has recorded up to 5 individuals in Ba Tri area.

This one-week survey therefore could be a desirable data to support mornitoring SbS as well as waders population wintering in Mekong delta, especially at the IBAs along the coast in southern Vietnam. 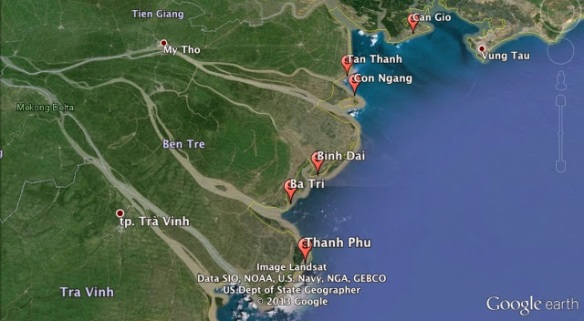 4. Findings (Outputs)
During survey, at least 3 Spoon-billed Sandpipers were recorded, up to five birds were observed. We also counted or estimated other waders occurs at surveing sites (table 1).

Can Gio is one of the most important sites for shorebirds during wintering time. There are thousands of birds using both muddy beach as feeding habitats and mangroves as roosting spot. The salt-pans along the coastal areas are also feeding habitats for them during high tide. The survey in 2011 indicated that the beach is a sandflat which is too hard for SbS, the two observations were at roost sites.

This site is situated at the outer of Mekong river (Song Tien), the most important for Spoon-billed Sandpiper in Mekong delta, Vietnam. Recently sightings proved that SbS using muddy beach, clam farms for feeding during winter. It occurs here beginning in mid November to mid April (Wildtour’s team observed 2011-2013).

Beside three to five individuals of SbS were sighted, we also found that so many Red-necked Stints, Broad-billed Sandpipers and other waders feeding at this site.

Although three SbSs were seen at this site in 2011, we did not any at this time. The habitat at 2011-sighting spot seem to be changed after two years, soil is less mud and harder than before. However, this island is very important roosting site for those birds in Tan Thanh and Binh Dai. When tide was coming up, we saw thousands waders flew in which were estimated 700 Pacific Golden Plovers, 1000 Great Knots, 200-250 Bar-tailed Godwits, 100 Far Eastern Curlews, 300 Caspian Terns.

We couldn’t access clam farms in Thoi Thuan as it belongs to a private company and it is also a restricted frontier area, the local authorities required us special permit to enter their area. Therefore, we were only able to survey at some salt-pans and shrimp ponds nearby, not many species were observed, Marsh Sandpiper (100+), Common Greenshank (29), Common Redshank (11), Golden Plover (24), Caspian Tern (2). None wader-birds including Little Egret (32), Yellow-vented Bulbul, Olive-backed Sunbird, Plain Prinia, Collared Kingfisher.

This is an IBA (code VN 063) classified by Birdlife International. The beach is using as clam farms, ground is sandy and quite hard for SbS, we thought. This is considered as impact from less sediment due to hydropower dams along Mekong river and especially Ba Lai drain and dykes were built along coastal in this area (?). We spent 4 hours checking around, birds encountered were Golden Plover (150), Far Eastern Curlew (30), Common Greenshank (45), Bar-tailed Godwit (60), Red-necked Stint (230), Sanderling (56), Terek Sandpiper (37), Lesser Sand Plover (250), Kentish Plover (70).

Our final survey was at Thanh Phu district, this is a new site as we did not survey in 2011. By looking on google maps, we found a good mudflat by outer of Ham Luong river. However, there were no SbS there nor many shorebirds observed. Thanh Phu was proposed for a natural reserve area but wasn’t designated, all mangroves surround was cut down for shrimp and crab farms.

We saw no direct threat to Spoon-billed Sandpiper as well as other shorebirds, there was no hunting or trapping. However, habitats lost probably the main issue. The roosting sites along coastal areas in Ben Tre province have changed to aquaculture might impact waders population. The less sediment might also be considered as a threat to SbS feeding habitats.

1) Again, as we recommended after survey in 2011, International and local organizations on birds protection should address to responsible governmental agencies in Vietnam with request on creation of protected territories at wintering grounds and staging areas of Spoon-billed Sandpiper and huge concentration of waterbirds (mudflats at Tan Thanh village, Ngang Island). The first step in this direction could be declaration of these territories as IBA. A reserve area should be assigned to protect and sustainable using SbS feeding habitats.

3) Conduct survey in the areas further south such as Tra Vinh, Soc Trang and Bac Lieu province which are not been done before.

16 thoughts on “Spoon-billed sandpipers in Vietnam”