This video is called Walking with Dinosaurs: Therizinosaurus. 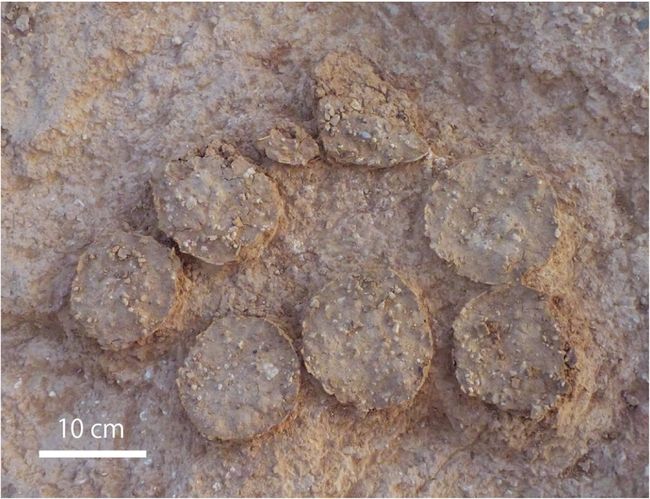 LOS ANGELES — A nursery of bizarre-looking dinosaurs known as therizinosaurs has been found in the Gobi Desert in Mongolia.

The nesting colony contained at least 17 clutches of eggs.

“Not only is this the largest colony of nonavian theropods, but this is the best documented site,” said study co-author Yoshitsugu Kobayashi, a vertebrate paleontologist at Hokkaido University in Japan, who presented the findings here at the 73rd annual Society of Vertebrate Paleontology conference.

Therizinosaurs, which lived about 70 million years ago, sported huge, round guts; stumpy legs; a long neck; and a turtlelike head and beak.

Despite being members of the carnivorous group known as theropods — which includes the deadly king of the predators Tyrannosaurus rex — the waddling dinosaurs were herbivores. They also had enormous Edward Scissorhands-like, three-digit claws that may have been used to grasp branches and scrape up plant material, similar to the way bamboo-eating pandas do today.

Kobayashi and his colleagues discovered the nest while in southeastern Mongolia in 2011. On the last day of their trip, they decided to leave the area they were excavating known for therizinosaur bones to instead examine another bone bed nearby.

“There aren’t many bones from this formation, so we didn’t expect to find anything good,” Kobayashi told LiveScience.

As the sun was setting, a guide pointed out an eggshell, and the team soon found one nest site right next to their car. Further investigation revealed four more nest sites. The following year, they returned and excavated a total of 17 clutches, for a total of about 75 eggs.

The eggs were round, with about a 5-inch (13 centimeters) diameter and rough outer shells. Based on size analysis and the species found in nearby areas, the team concluded that therizinosaurs laid the eggs. The animals would have been about 220 lbs. (99 kilograms) when full-grown.

That finding, in turn, indicated the adults must have guarded the eggs to protect them from predators, Kobayashi said.

The finding bolsters the notion that therizinosaurs were social animals that hung out together.

“We have some very intriguing evidence of mass congregation in therizinosaurs,” said Lindsay Zanno, director of the paleontology and geology research laboratory at the North Carolina Museum of Natural Sciences.

“We have several mass-death quarries,” said Zanno, who was not involved in the study. “So the question for us is, what does that represent in terms of their ecology? Did they live in herds, or were they gathering periodically?”

The new finding suggests the animals at least gathered together for nesting, Zanno told LiveScience.